I recently bought a Mamiya RZ67 Pro II. This is a large, bulky 6x7 film camera built for studio photography from 1995. Due to its size and weight the camera isn’t the most portable, but I took it with me on holiday to Belgium along with a heavy tripod. The camera is modular camera and as such pretty much every part of it can be swapped out and replaced depending on the situation and personal preference. I took with me a spare 120 film back, a Sekor Z 180mm f4.5 W-N and a Sekor Z 65mm f4 W. I brought several rolls of Portra 400, Ektar 100, and Tri-X 400. The camera is too heavy in my opinion to carry round on a shoulder bag for any period of time, so I carried it in a Lowepro Orion Trekker II. This backpack has a compartment with removable foam pads that normally holds a DSLR, two or three lenses, and any small accessories. With the separators removed the RZ67 perfectly occupies the entire space with the 65mm lens attached (with the 180 attached it does not fit).

The changeable back is something I’ve never experienced before. I’ve used plenty of 35mm film cameras and a couple of medium format TLRs but I’ve never been able to change film to suit the situation without having to rewind a roll and write how many exposures I’d taken with a sharpie on the canister. With the Mamiya you can simply swap to a different film as the light changes, and this is incredibly useful. You can even swap from colour to black and white film as you desire.

One thing I noticed using the RZ67 is that due to being target towards professionals it has a huge amount of safety features - it’s very difficult to accidentally make an exposure or to accidentally expose the film to light while changing backs. This is especially important when you only get 10 shots on a roll of 6x7.

The Eurostar train from London arrives at Brussels Midi station. I was heading to Ghent to stay with some friends but I had most of a day to spare so I had time to look around. The station has plenty of lockers so I could keep my bags there for the day for a few euros. Sightseeing with luggage would not be fun.

Brussels is a mix of old and new. I took the exit out of the station that headed away from the city accidentally and ended up walking a long loop around some of the poorer parts of the city back North to the center. There’s a large contrast between the well maintained streets lined with terraced houses and the rundown poorer areas with bits falling off of the buildings and beaten up old cars lining the roads. 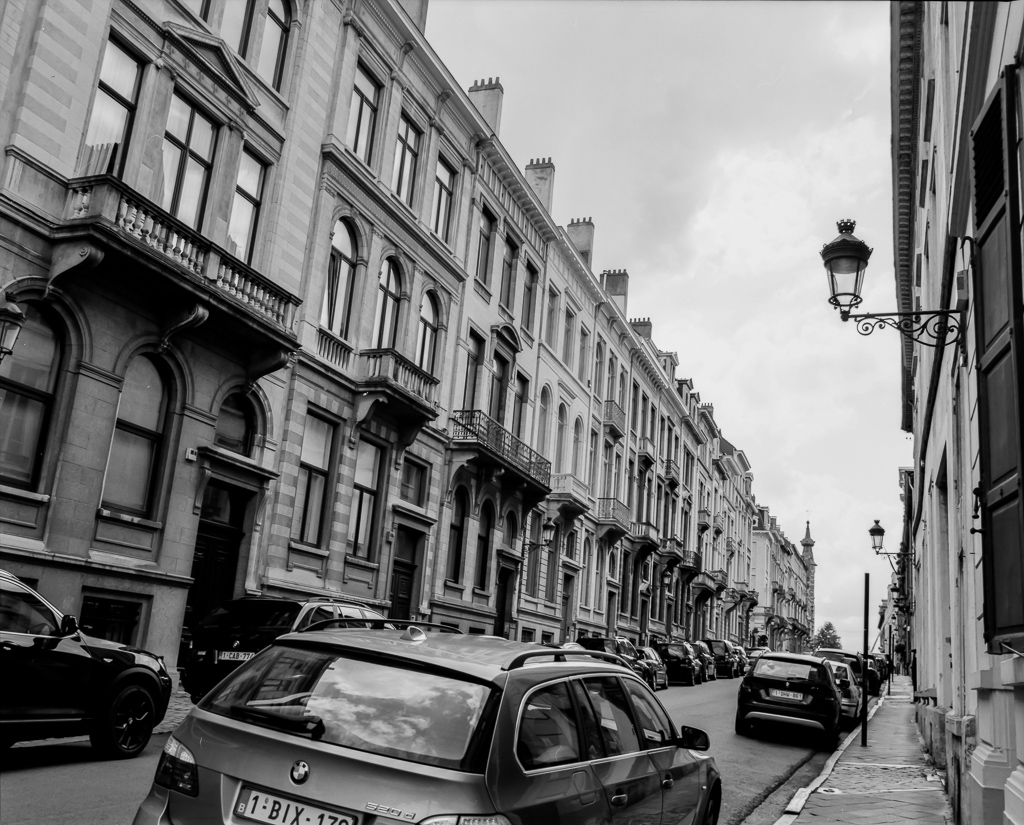 Brussels has a rich history, with the square called Grand Place with it’s gothic style middle ages town hall being a popular attraction. 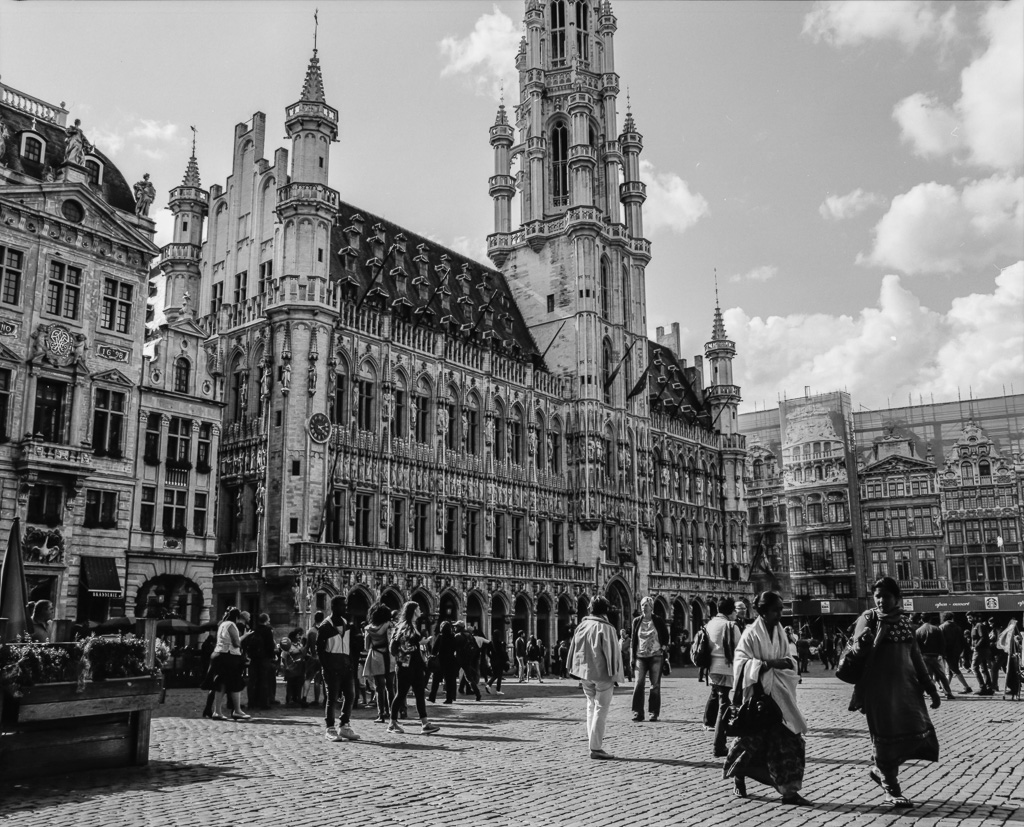 Other than Grand Place and the Orangerie du Parc d’Egmon, Brussels seemed almost void of people. I saw very few people walking around all day - that is, until I rounded the corner and arrived at the Manneken Pis. There were people everywhere, all coming to visit the water fountain with a statue of a small naked boy peeing. I learned afterwards that there was a lot of history around that little boy. The Wikipedia page describes how it has been repeatedly stolen, destroyed, reclaimed, and rebuilt over the ages. The meaning of the statue is shrouded in legend, but there is a large amount of national pride surrounding it. They even dress it up in appropriate clothes for different special occasions. 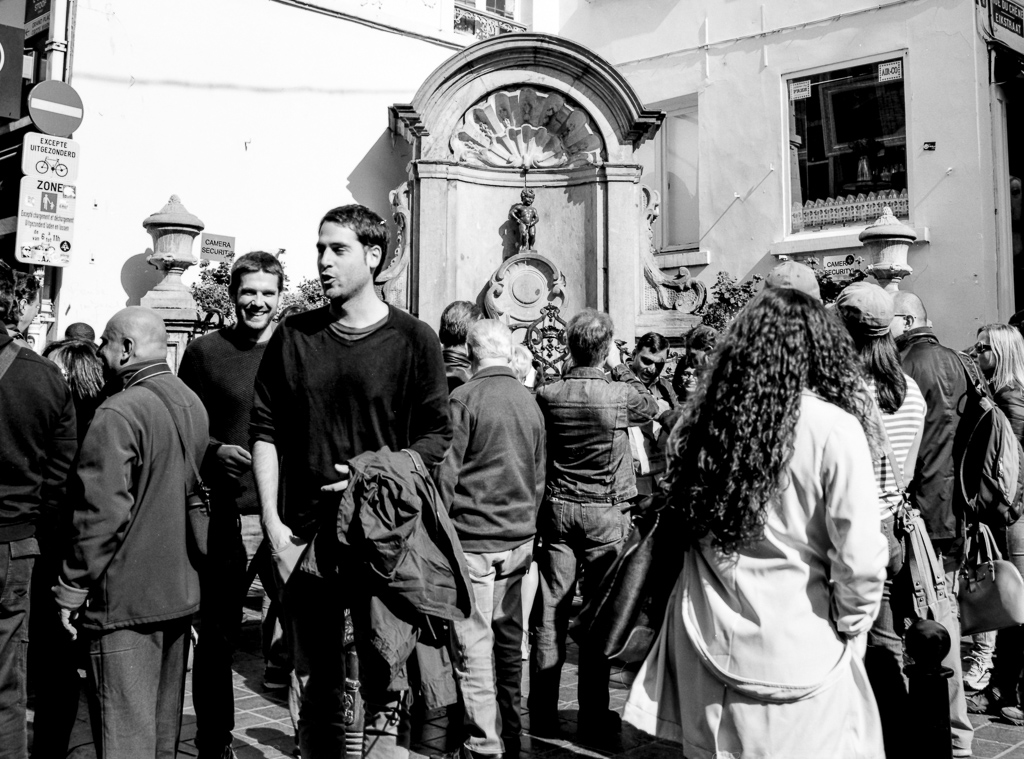 Getting to Ghent was really easy. There’s a really good train line between Brussels and Ghent, and the same line goes to Bruges as well, making my trip for the next day really easy.

The center of Ghent is really beautiful. There’s a lot of old buildings and several wide open cobbled squares lined with bistros. A river passes through the centre and there are several ornate bridges crossing it. 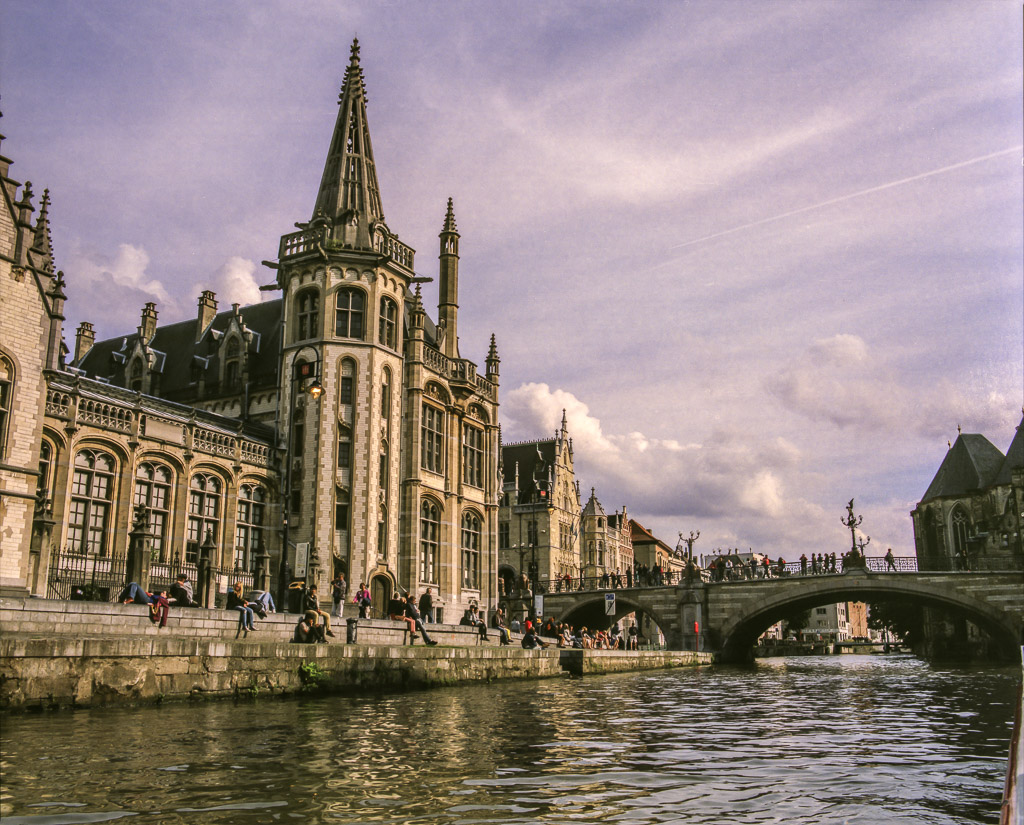 There are several companies offering boat trips to tourists who provide some background and history for those who want it. It’s an enjoyable experience and a fun way to learn more about the city. It’s not expensive so I’d recommend people give it a go. Make sure to visit STAM afterwards for a well-collated history. 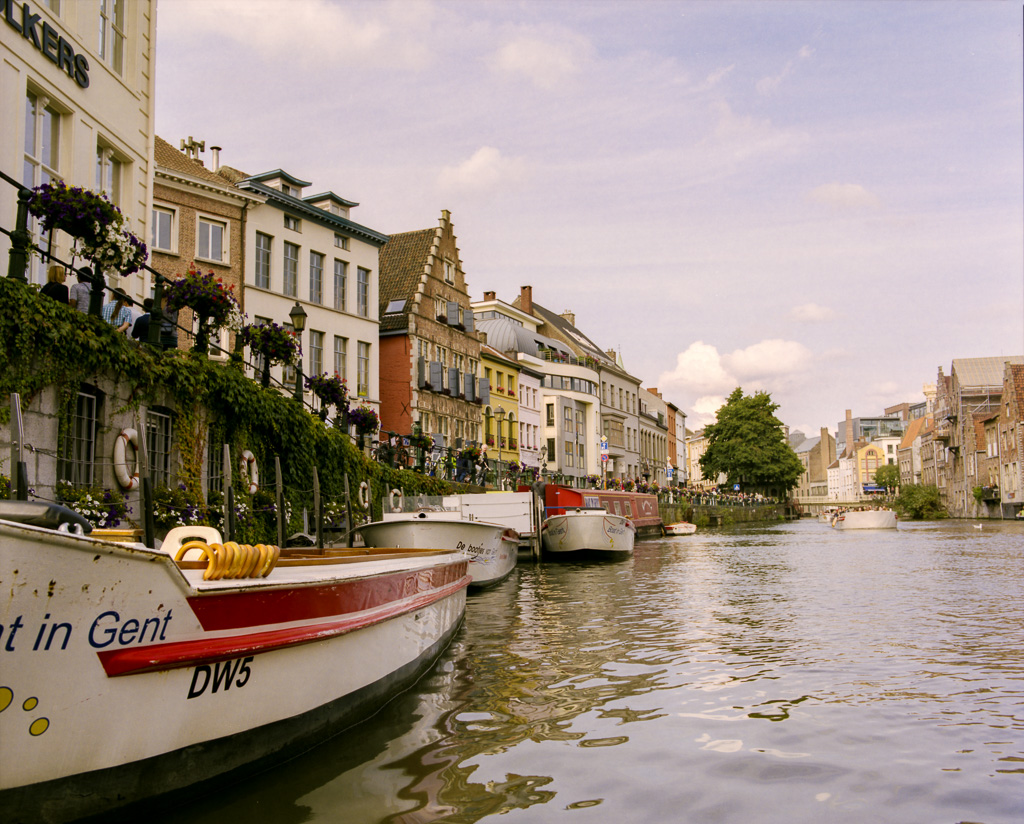 Ghent has a castle with a museum inside, with possibly the most interesting part - if you don’t mind the macabre - being a museum of torture. There’s also a good view of the city from the top. 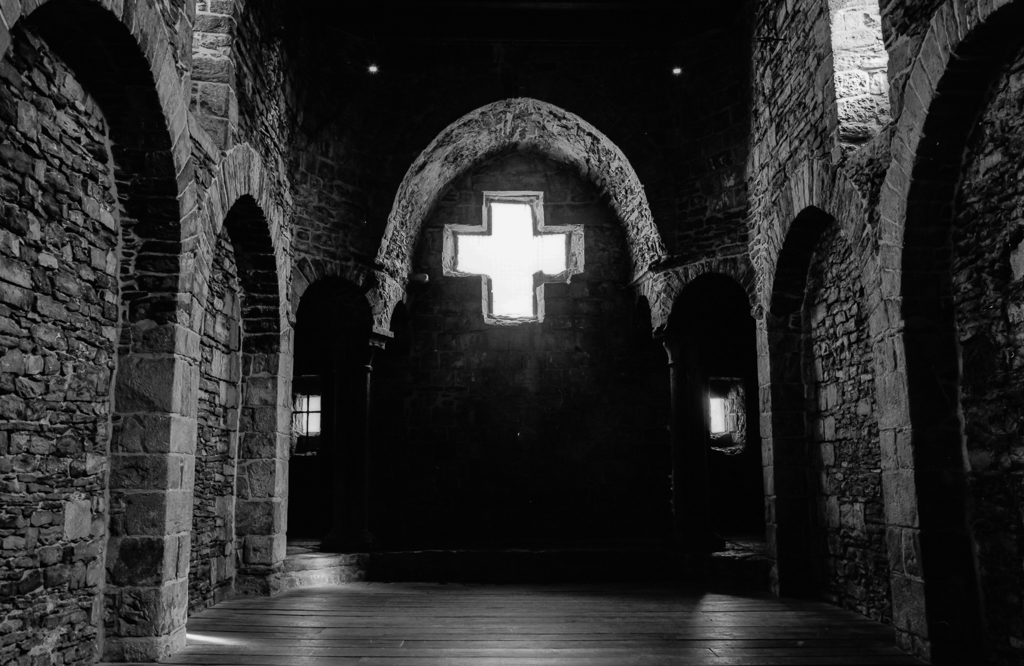 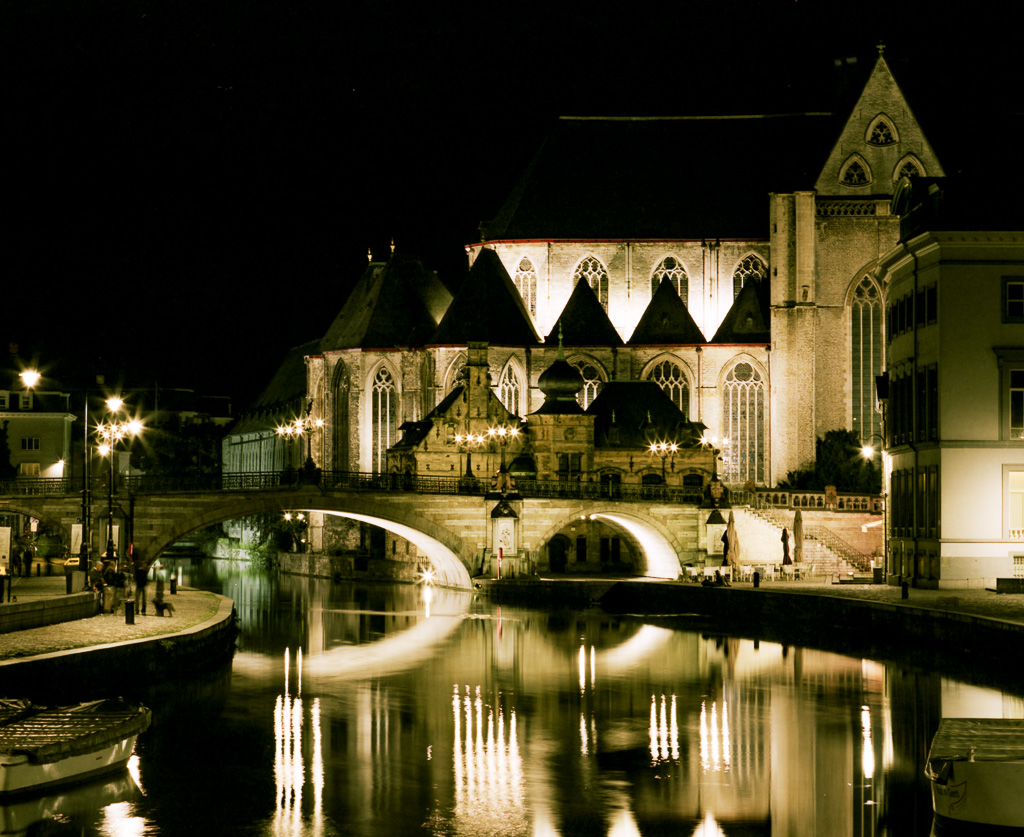 One of the best things about Ghent was the public transport system. The city is very pedestrian friendly and the trams are excellent. It’s cheap to travel around and if you board another tram within an hour of the previous one you don’t pay anything. It’s both a fun and a convenient way of getting round the city, and a much better experience than the London Underground!

When I arrived in Bruges it was grey and raining. Unfortunately, the story did not change for the whole day. Bruges is very touristy and the damp weather did not deter the crowd. Umbrellas were out in force and the horse and carriage rides for tourists were operating throughout the day. The main square is pretty and is lined with restaurants. The medieval Belfry building contains a bell that chimes regularly throughout the day, and at night there was a bell concert with multiple different bells. The square was lit up and with the rain and the bells together it was quite a magical experience. Despite being touristy I really enjoyed Bruges. A day is definitely enough time to see the main sites, but not enough to experience all the restaurants and cafes. 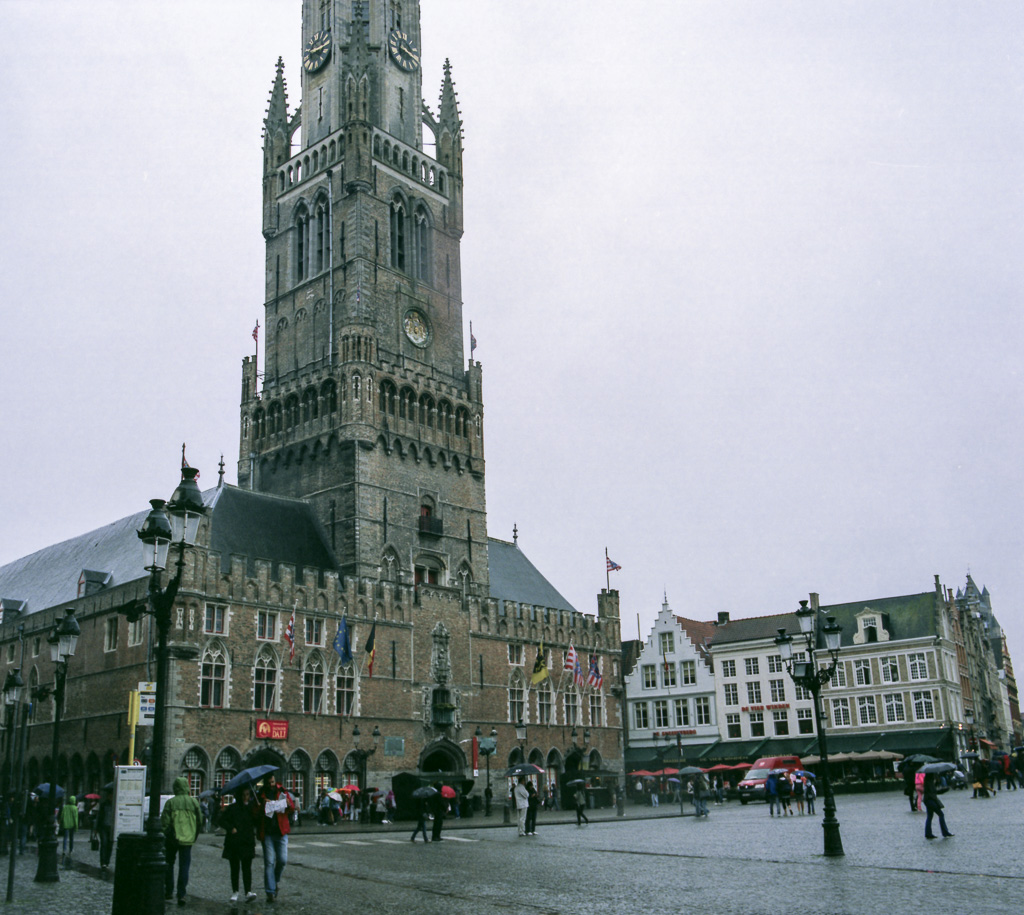 Here’s another shot of the Belfry on Tri-X. You can see the horse and cart with some tourists inside and get an idea of the architecture of the buildings and the style of the streets. 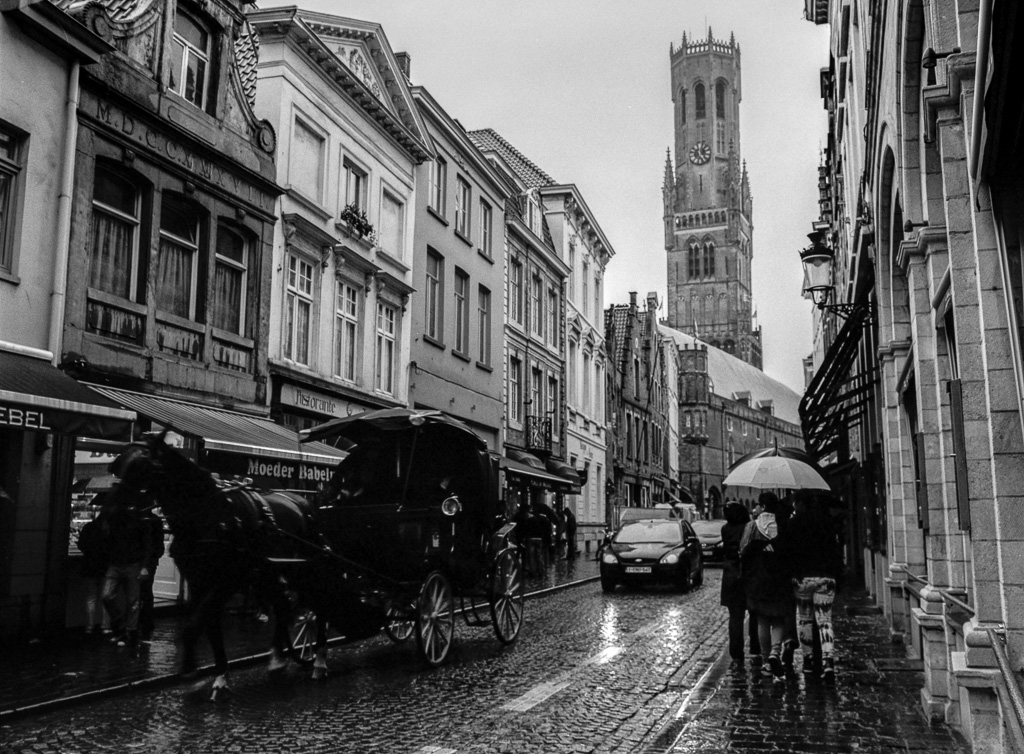 There is an interesting water feature / statue near the bus station. It’s in the middle of a huge cobbled square and seemed rather lonely on its own in the rain. 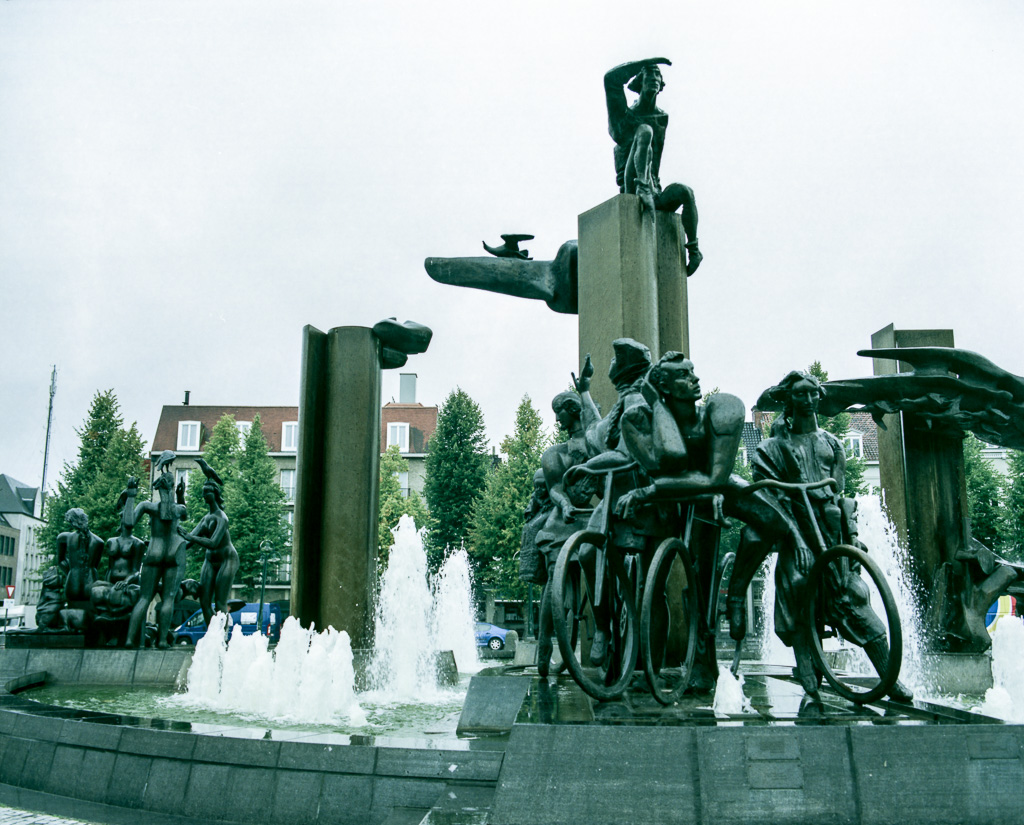 I walked past some people doing an ALS ice bucket challenge.

Too many things to carry! 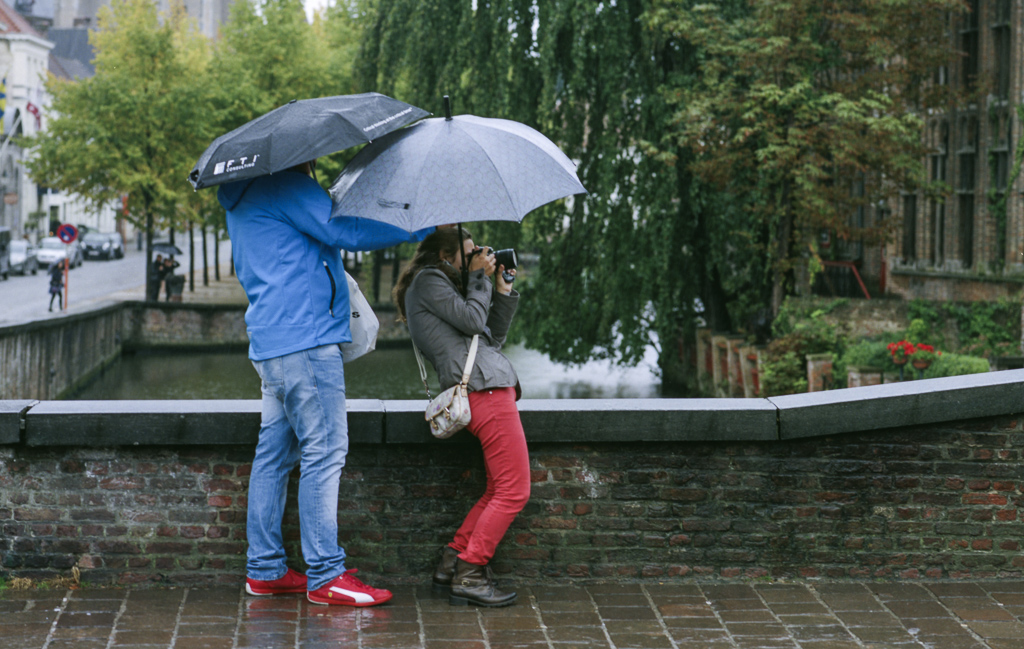 Inside the Basilica of the Holy Blood. It is ornately decorated and I’d recommend everybody to go and see it. 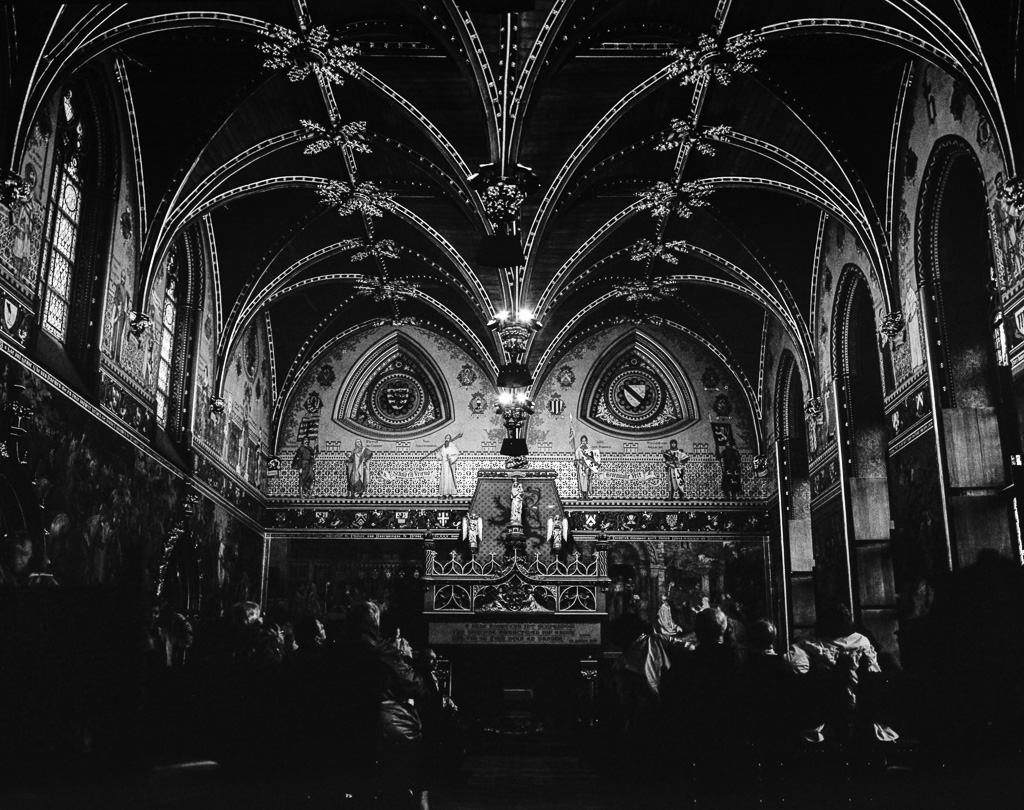 Both Bruges and Ghent are very easy to get to from Brussels Midi. The trains run regularly and are not expensive. If you’re planning on visiting Belgium/Flanders then these two cities should be on your list. Unfortunately I didn’t have time to visit Antwerp, but I’ll be sure to come back to Ghent when I do!

The RZ67 survived the rain and being carried around for several days, but it’s definitely not the easiest way to take photos on holiday. It’s also a very slow camera to shoot with, but I was on my own and could take all the time I needed. I’m impressed with the quality of the negatives - my only real experience with medium format before was from a plastic-lensed Holga and a Yashica 635. The lenses are on a whole different level. I’ll definitely be taking it with me on new adventures in the future.