Until recently I had never been to either Hungary or Greece, so I was quite excited to go on a short trip spending 5 days in Budapest and then 4 days in Athens. I brought along my Nikon FM2N that I acquired from last year’s Photographica Fair in London as well as two Nikon Series E lenses (the 50mm f/1.8 and 35mm f/2.5) and some Kodak Portra 400 and Fuji Superia 200. Below is a selection of photos from the trip with some short descriptions.

Heroes’ Square is at the end of a long road leading away from the river on the Pest side of the city in City Park. It’s a huge landmark and was filled with tourists, myself included. 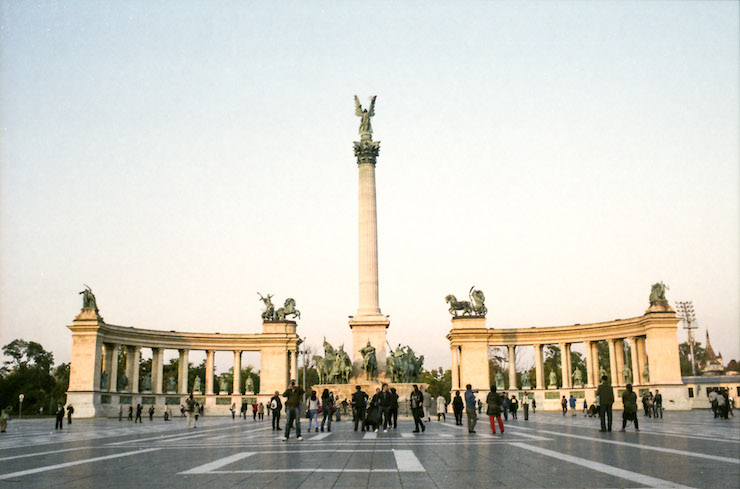 It’s a good idea to check Heroes’ Square out at night as well, possibly after spending a relaxing evening at the nearby Széchenyi public baths. The picture below shows a restaurant on the edge of the lake in City Park in the evening. 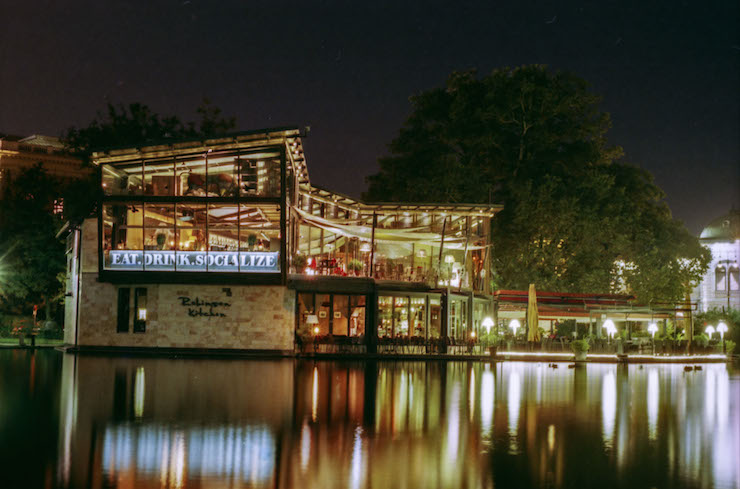 I would also recommend the tour of the Hungarian State Opera House which can be found on the road leading up to Heroes’ Square. It felt rather rushed but was lots of fun and the building itself is filled with ornate detail. 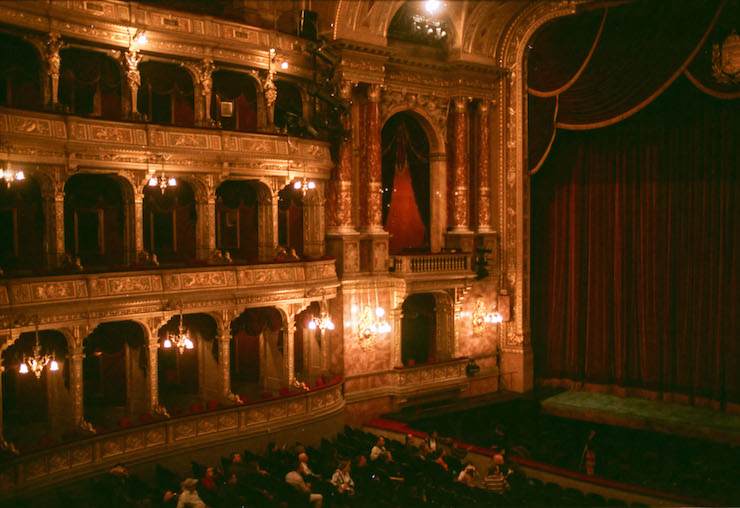 Budapest is split in two by the river into Buda (historical buildings, generally more expensive) and Pest (cultural, food and drink, fast growing). I spent a while on each side but have many more photos of Buda. I would recommend getting the Budapest Card if you’re visiting because among other things there’s a walking tour around the whole area of Buda Castle that is very interesting. My tour met at Trinity Square near Buda Castle. 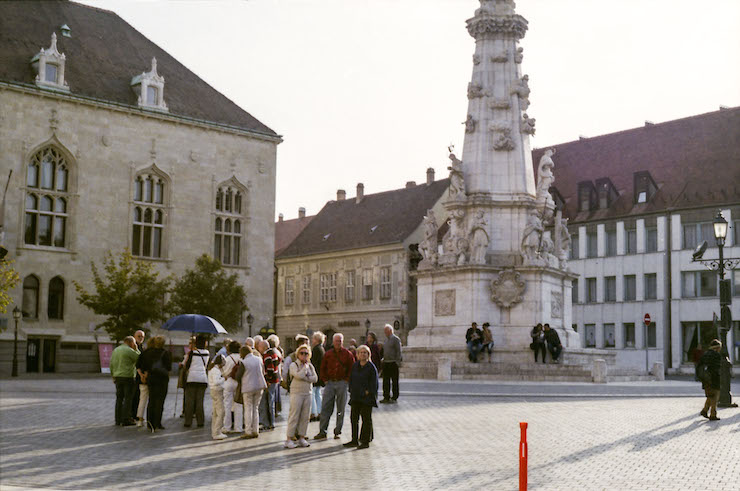 There’s an interesting church called the Matthias Church at Trinity Square with some interesting patterns in the roof tiles. 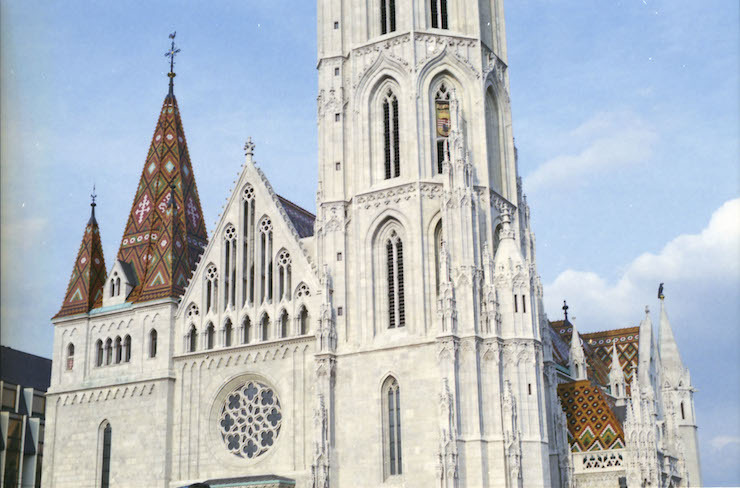 The tour gives a good view and description of the area and talks about the history and the different cultures that you can find. There’s a great little café called Ruszwurm with an incredible collection of cakes that I highly recommend nearby, and there’s a restaurant called Pest-Buda on the hill also if you’re after something more substantial. 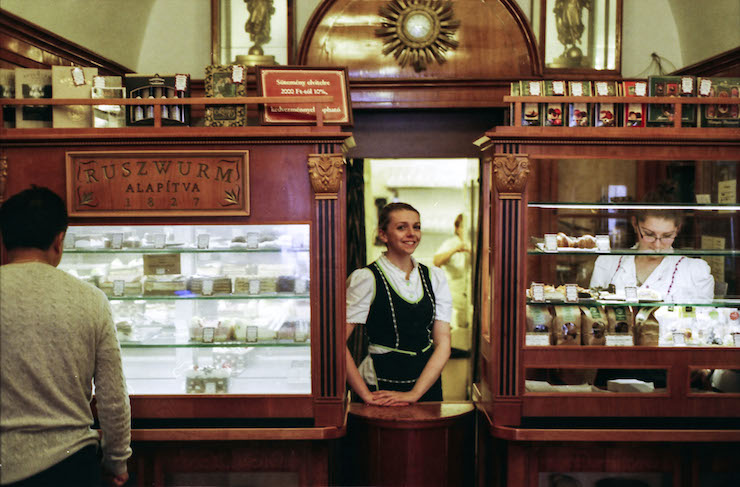 Not too far away is a statue of a horseman dedicated to the 3rd Hussar Regiment. 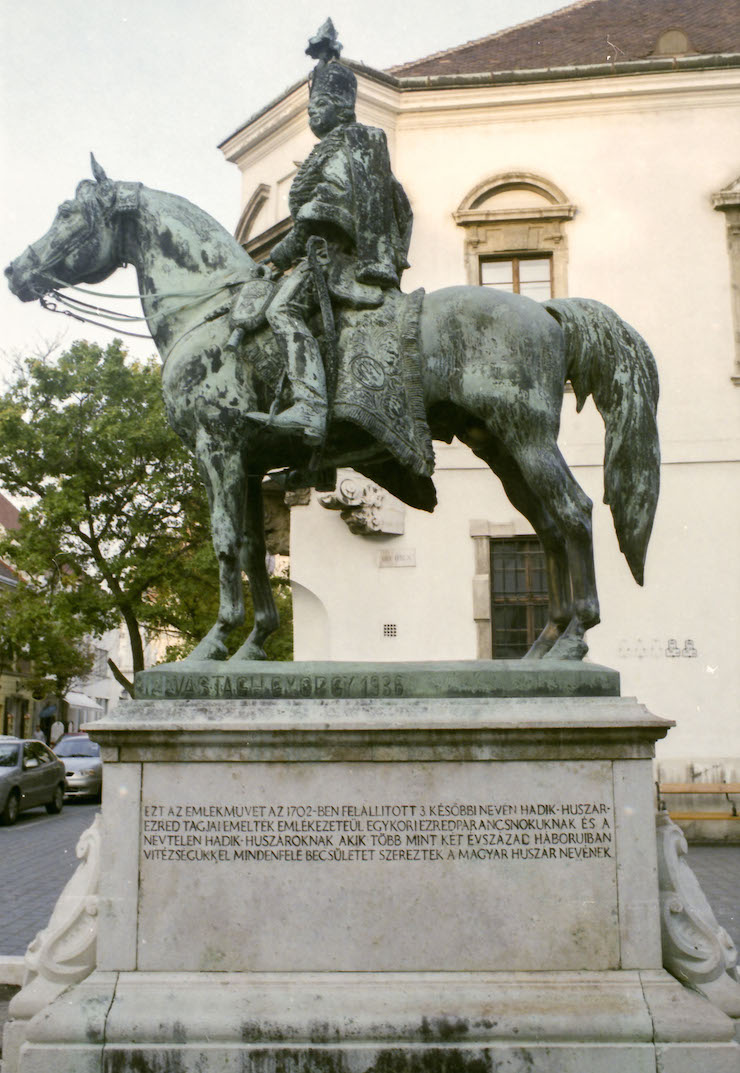 It is said that touching the brass testicles of the horse you will have good fortune - a tradition started by university students before exams and continued by tourists and locals alike. You can imagine how much good luck has been provided by this statue by checking out how incredibly smooth and shiny the testicles are compared to the rest of the statue. 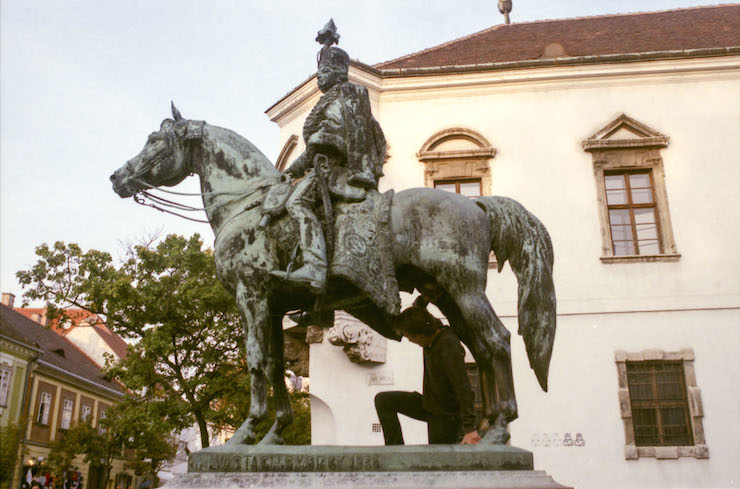 On the hill also is Budapest’s Presidential Palace which has a big square in front of it. There is a changing of the guards ceremony on the hour between certain times (check their website for times). 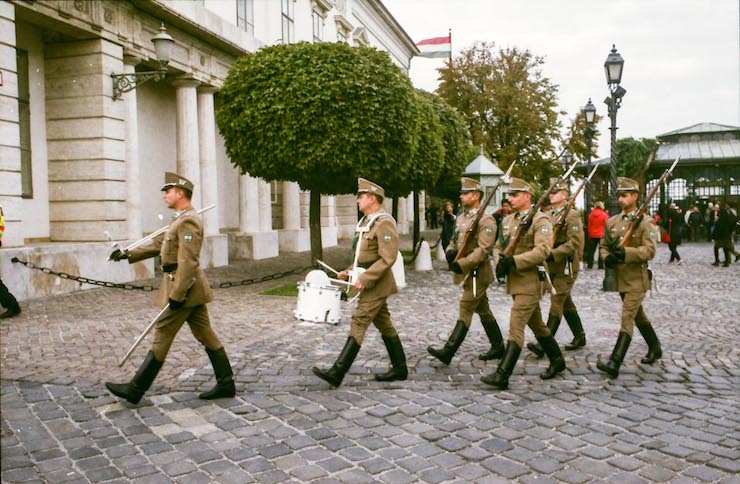 Also on the hill is the Budapest History Museum whose entrance square was undergoing somewhat of a dramatic makeover when I walked through. There was building material everywhere and construction was under way of some additional structures around the courtyard. It wasn’t typical repair-work however. This was construction out of wood and polystyrene for a film set. 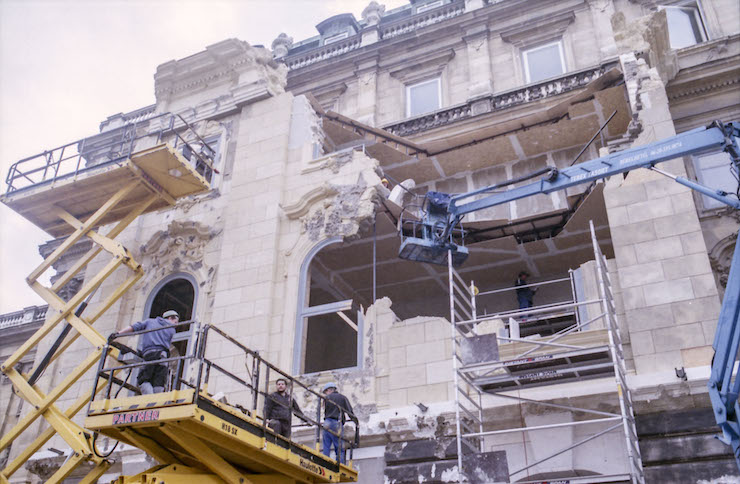 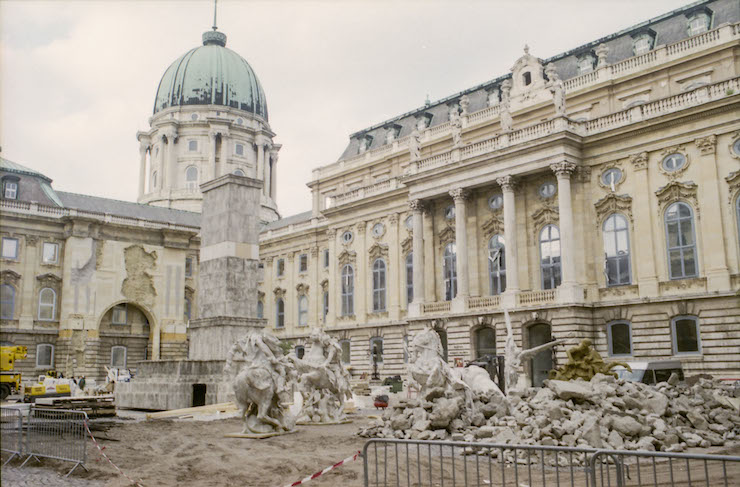 This entire section of building is fake. The actual courtyard wall is flat. 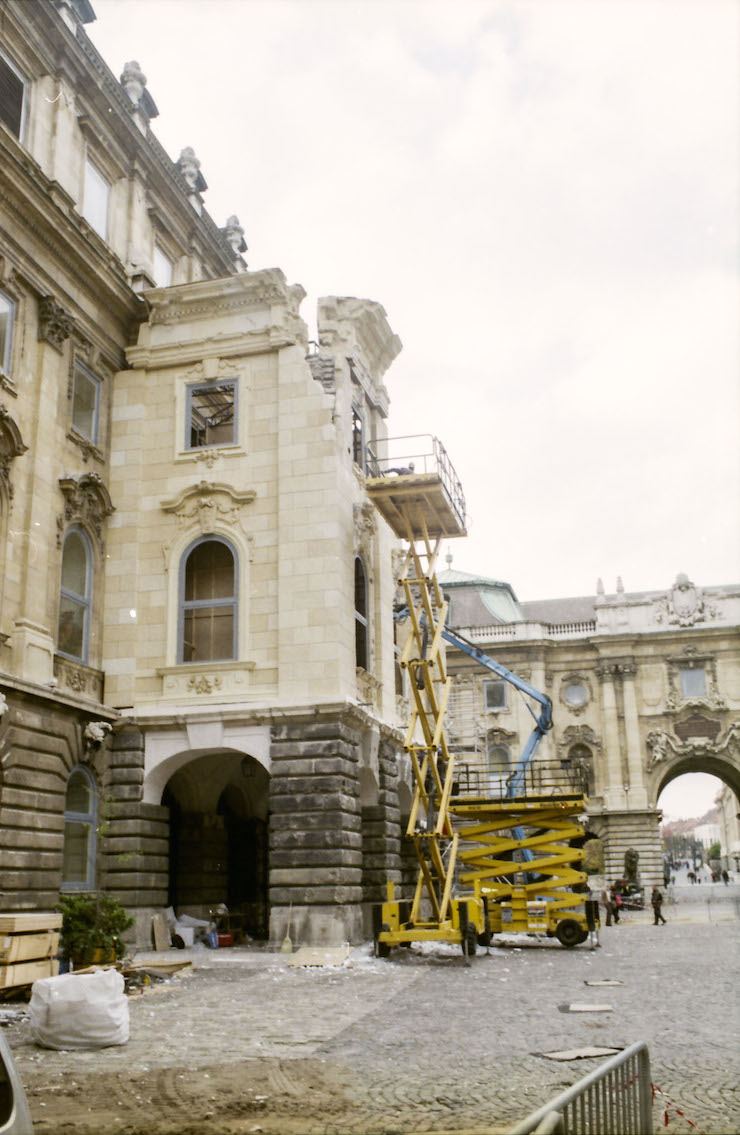 On the Pest side of the river is where you’ll find the night life, many more places to eat, ruin bars, shopping centers, and most of the accommodation. It also has many museums and interesting pieces of architecture including the Hungarian Parliament building. 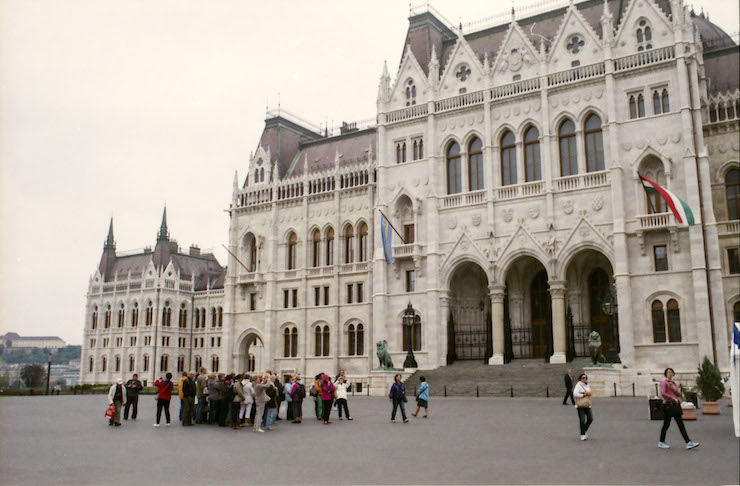 The next set of photos are from Athens, Greece. Athens was much more of a party and hospitality city. There were many more restaurants and bistro-style cafés. Music wafted down the streets from bars and people were selling things on the streets both inside and outside of markets. The weather was much warmer and there was a clear blue sky for almost the whole trip. While Budapest was jumper weather, Athens was definitely T-shirt weather. 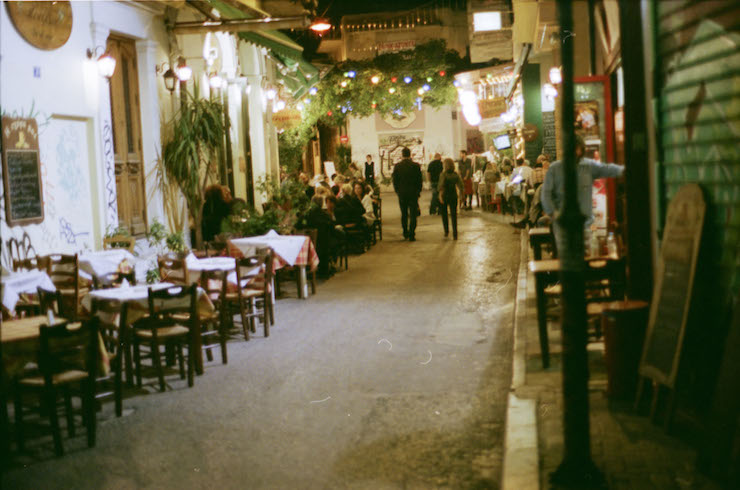 There were a lot of vintage and antique markets near the Acropolis. I spent a long time wandering around looking for old cameras and bits and bobs. 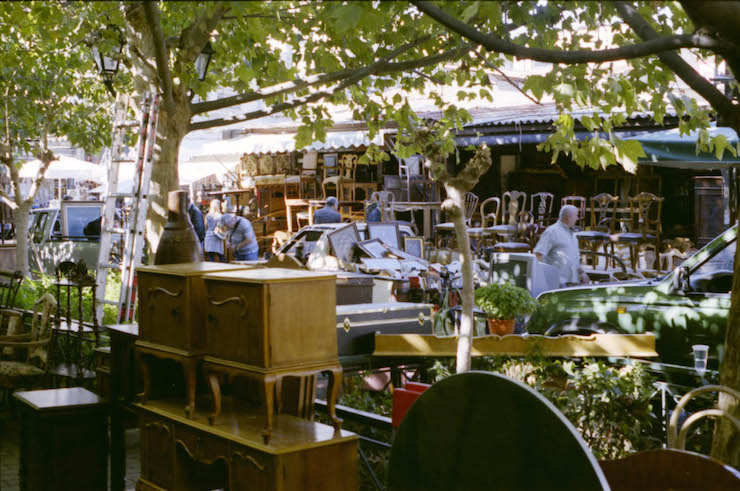 It was also much more tourist-oriented than Budapest. There were rows upon rows of tourist shops and the Athens Happy Train which seemed to take riders around a large circuit around the Acropolis area. 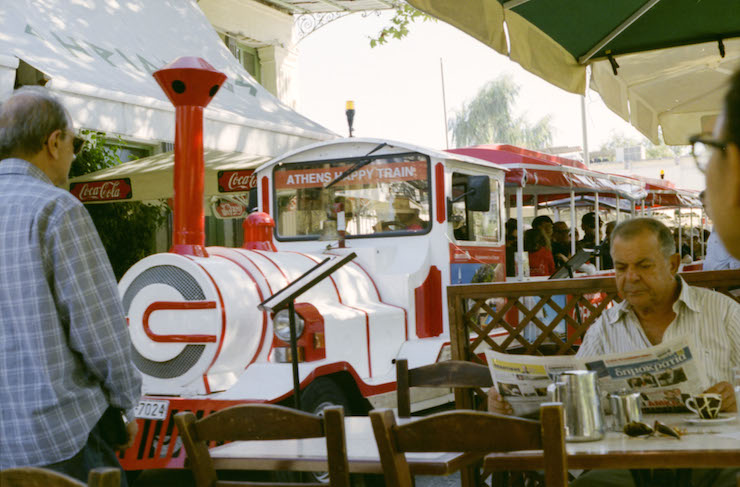 There is a lot of history that’s been preserved in Athens. Unlike Budapest where the settlement is much more recent and there isn’t a huge amount of religious monuments, Athens has been a center of trade since ~1,000BC and has had continuous settlement for 7,000 years. Most of the architecture has not stood the test of time intact however, such as this section of the Temple of Olympian Zeus. 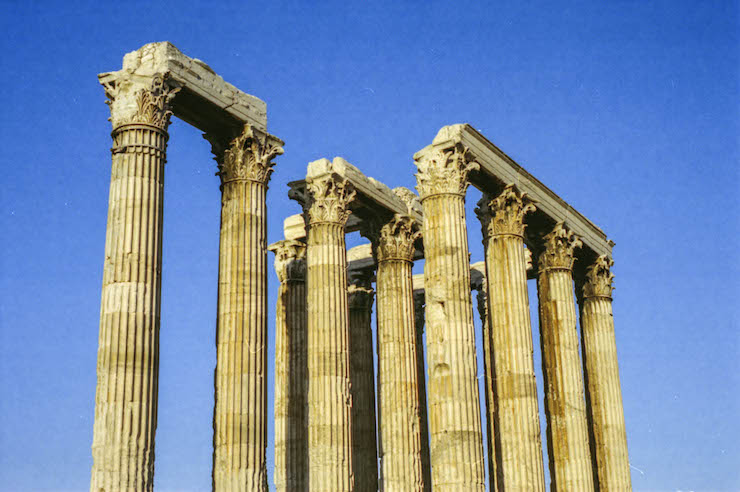 In fact so many pieces of historical monuments, walls, and pillars were damaged, rebuilt into other things (such as the Roman wall by the Ancient Agora), and/or stolen that while a lot of work seems to be being put into re-arranging and re-constructing artefacts, there is a huge amount of rubble and stone just lying around waiting for attention. 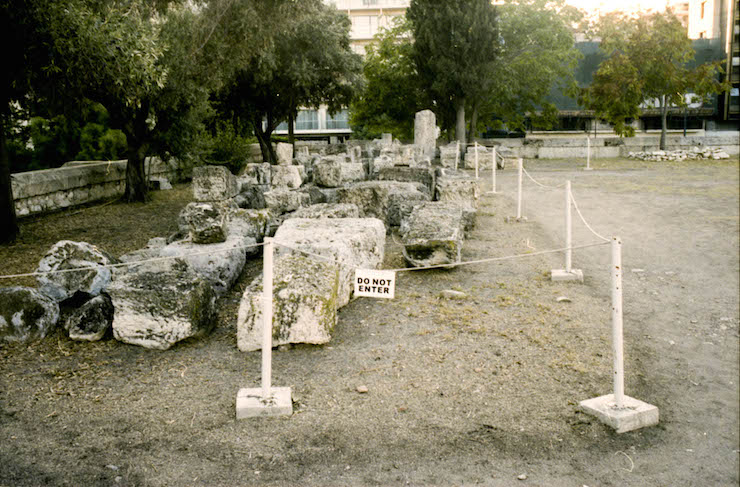 The Acropolis itself is astounding. A large number of the tourist attractions are ticketed but there is a single 12 euro ticket that covers entry to each of them (once each). For what you get I thought the price was fantastic, especially as I visited everything that the ticket provided entrance to. I’d also really recommend the Acropolis Museum, it’s a really nicely designed building with a great exhibition.

The Acropolis itself is under constant restoration at the moment. The whole front is shrouded in scaffolding but that didn’t stop the hundreds of tourists pouring through. It’s essentially a one direction circuit around several sights and monuments and then back down the other side of the hill. 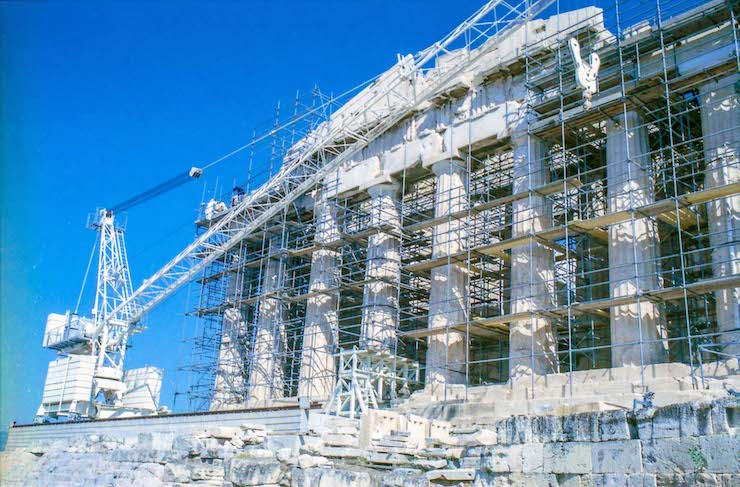 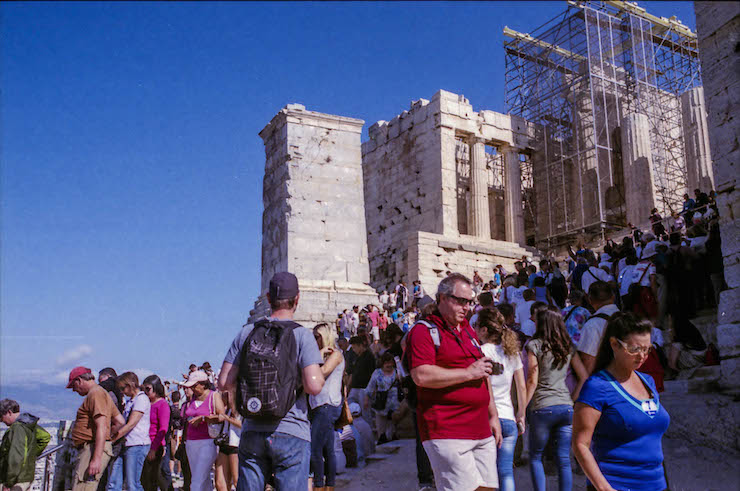 There are several large hills in the area of the Acropolis which is where I spent most of my time - circling it several times on foot during my stay - and this vista shows the style of architecture in Athens with the Ancient Agora in the foreground. 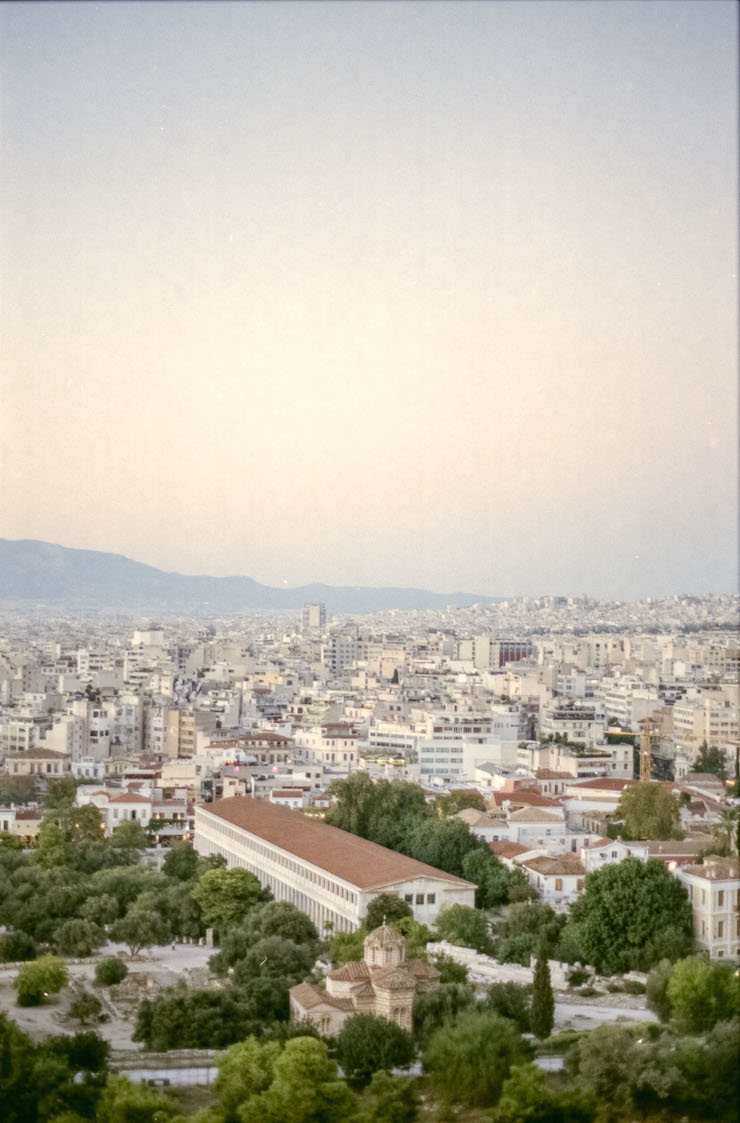 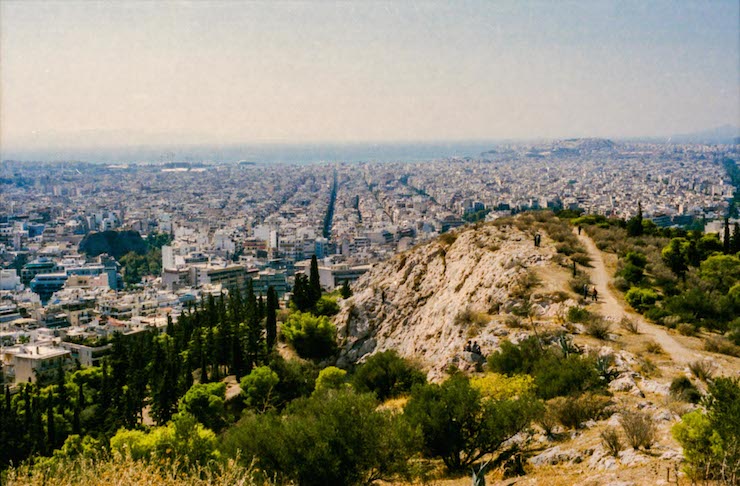 While the architecture is a huge tourist attraction, it’s deservedly so. Conjuring up images of what it must have been like to live in such a time, the monuments are beautiful both day and night. 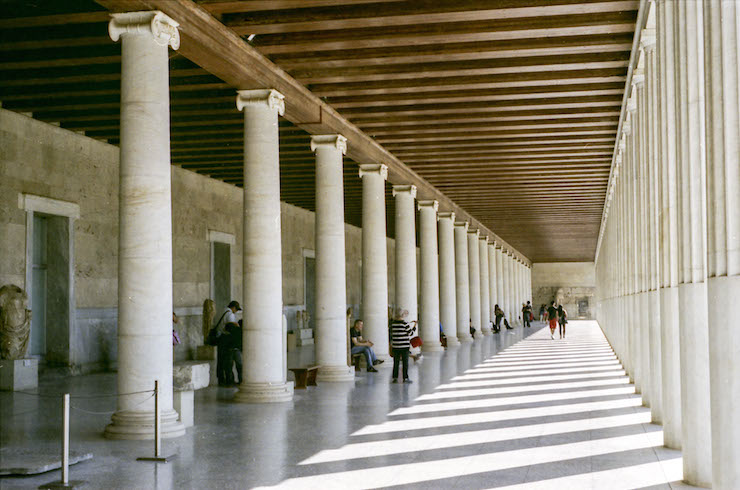 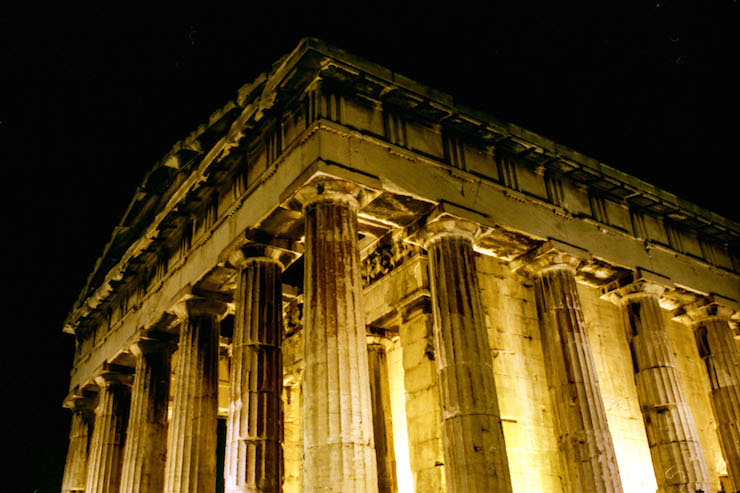 Here’s a view of the Acropolis with two people sitting and drawing from Filopappou Hill - well worth the hike up. 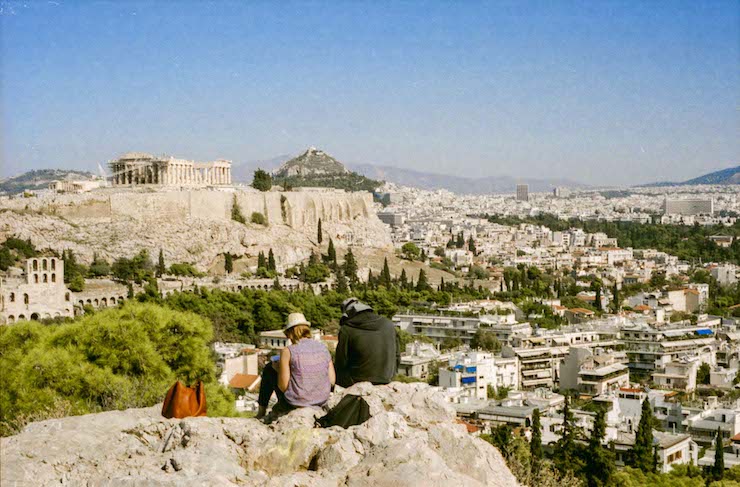 One thing I wasn’t expecting to see was tortoises. There was quite a few of them actually, often seen after hearing a strange rustling sound in the leaf litter on the floor. 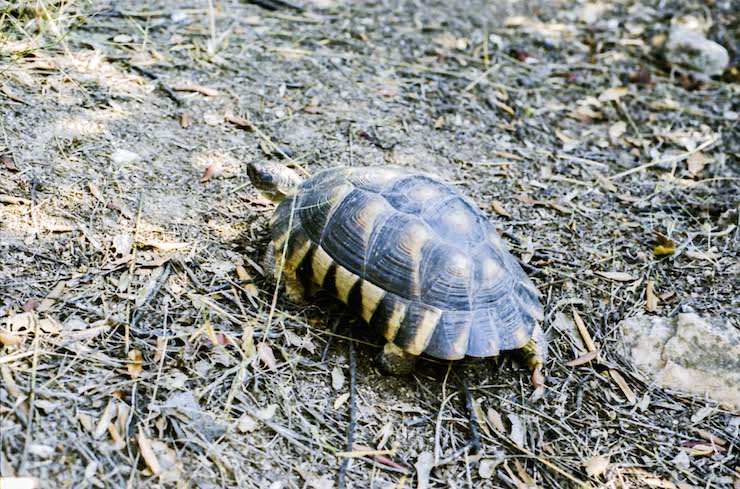 One thing that wasn’t included in the monument ticket was the Panathenaic Stadium. This isn’t expensive to get into and the ticket includes an audio guide. 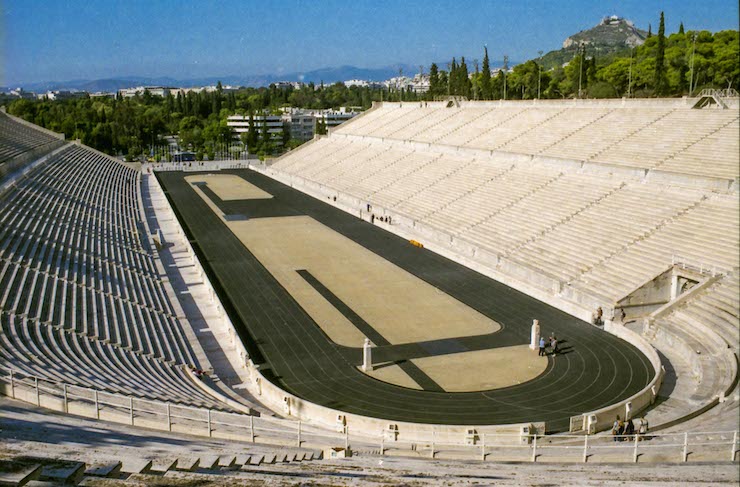 Overall both Athens and Budapest were excellent. I had some delicious meals in Budapest (the Pork Mangalica is delicious) and I really enjoyed walking around as the architecture is so different from London. Athens had more old historical ruins but Budapest had many more museums. They’re two very different places but both had their charms. You’ll have to see which ones you prefer yourself!