In June 2014 I took a road trip with two of my friends from London. We set off to Bath but traveled via the Cotswolds to soak in some of the countryside. Leaving London we went north in a rental car and spent the day experiencing some of the delightful villages and towns that the Cotswolds has to offer. The whole area is beautiful in June and I suspect they would be nice to visit any time of year. For somebody like myself who grew up on a farm and is now living in a big city it was a welcome break to the countryside - filled with rolling hills and quaint houses.

One of the earlier villages that we stopped at - I think it was Bibury - had an art sale happening in the local church so we popped in for a look around and a cup of tea. 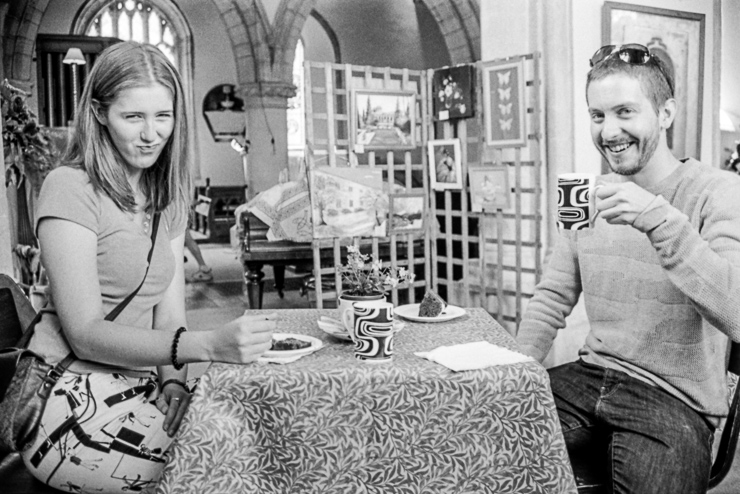 I brought with me the Nikon FM2n with some Kentmere 400 film and a Lomography Spinner 360 loaded with Kodak Portra 400. The monochrome images in this post were developed using Rodinal R09 One Shot developer.

After tea the next stop was a little bit north in a town called Bourton-on-the-Water. It was great weather and the town was immaculate and it seemed to be a popular tourist destination. Filled with small beautiful rivers with nice paths, stone bridges, and ice cream parlours, it would be a great place to relax for an afternoon. 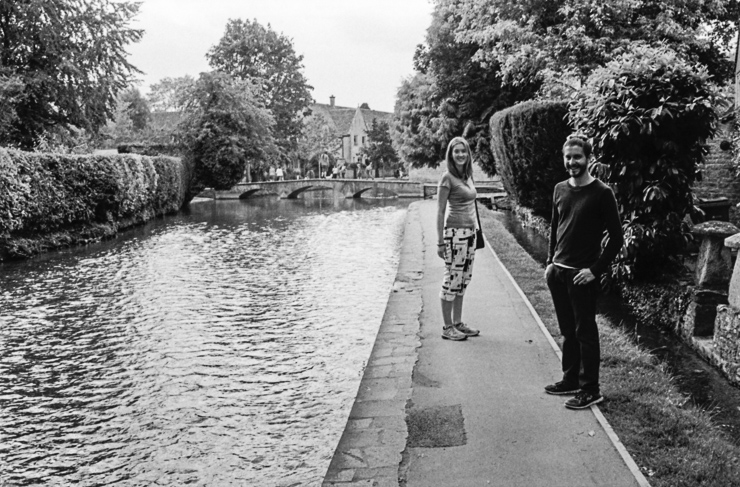 Heading north again we passed The Slaughters (what a peculiar name). Split into Upper and Lower Slaughter they seemed less of a tourist destination and more residential. There’s a nice river flowing through it and we saw a family of ducks. 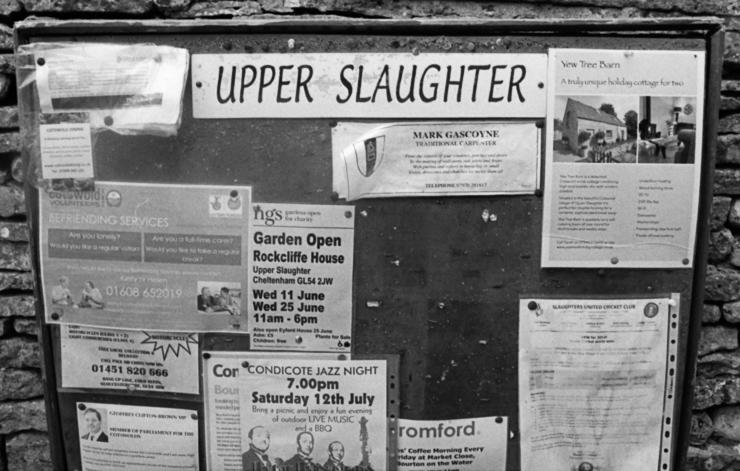 Upper Slaughter had a phone box converted into a defibrillator. 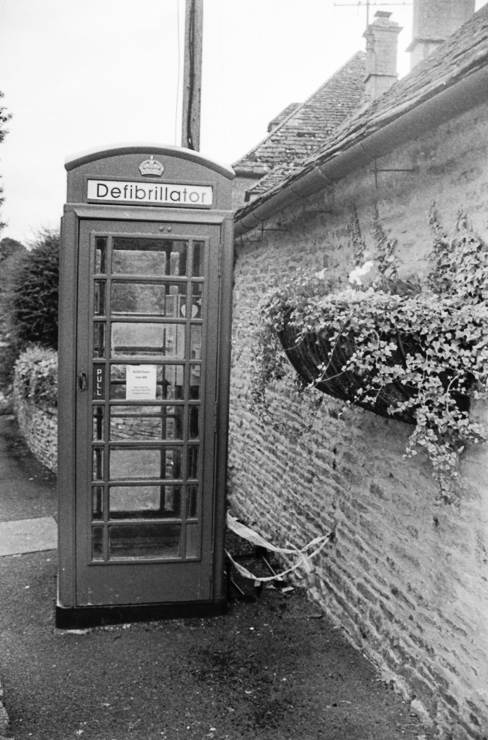 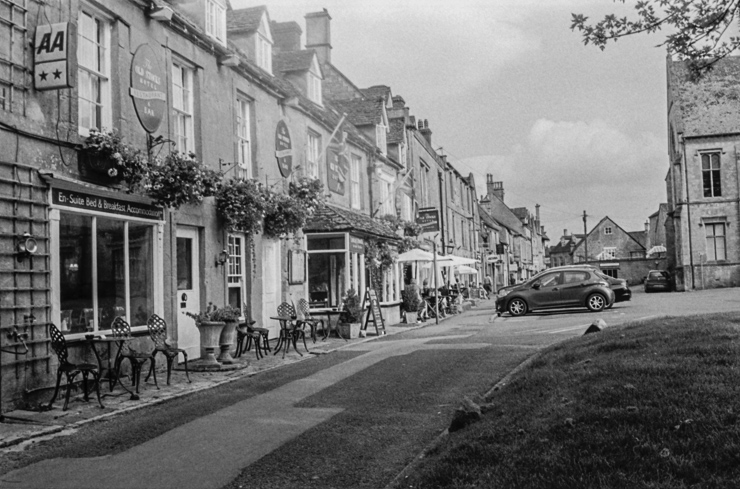 Somebody had been ‘yarn bombing’. 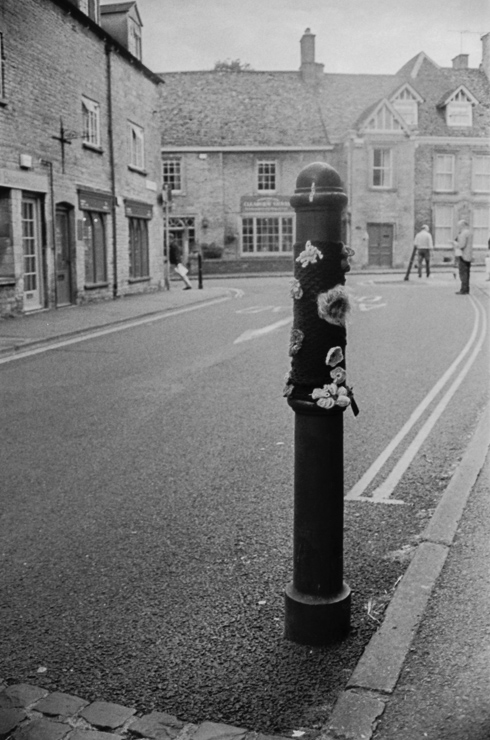 On the top of a nearby hill stands Broadway Tower, a 20 metre tall tower built at the end of the 1700s. Near by there is a nuclear bunker, which according to Wikipedia is from the Cold War and is one of the few remaining fully equipped nuclear facilities in England. 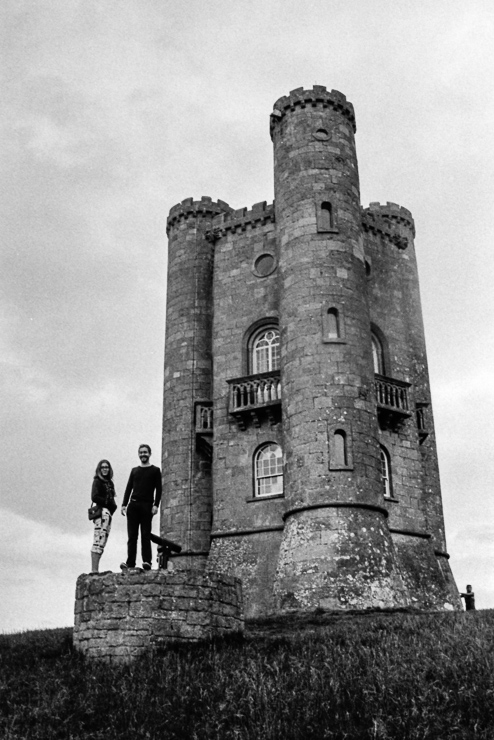 They keep deer near the tower.

Once we were done at Broadway it was getting dark and we headed on towards Bath, where we stayed with two friends overnight. We had a nice meal in the evening then headed to the Roman Baths in the morning. These have been on my ‘to visit’ list for a long time and I really enjoyed seeing them. 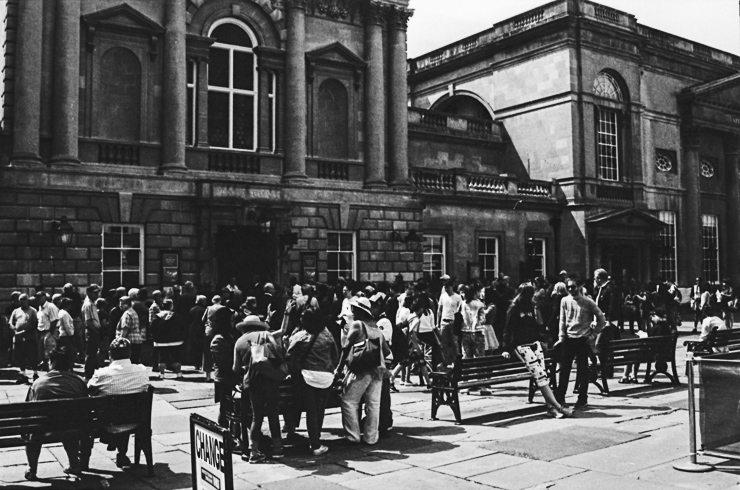 After buying a ticket you’re lead around an interesting historical exhibition and then quite quickly come out around the balcony. You can see the baths below as well as the statues that adorn the balcony with the huge Bath Abbey in the background. 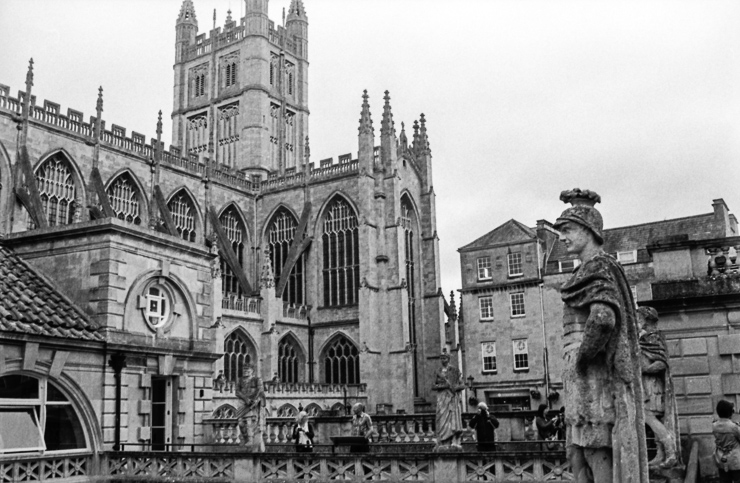 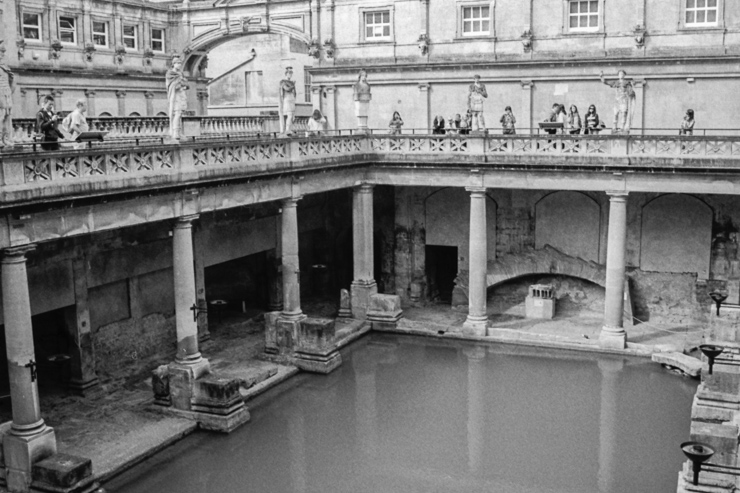 You go back inside for more of the exhibition then you come out on the floor level of the baths. 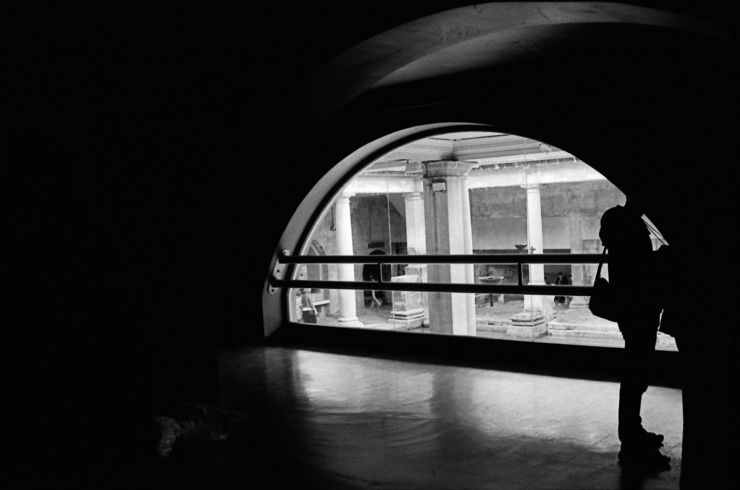 The whole bath house used to have a roof which has long since gone. The sunlight allows algae to live in the naturally warmed water causing the whole thing to look green. 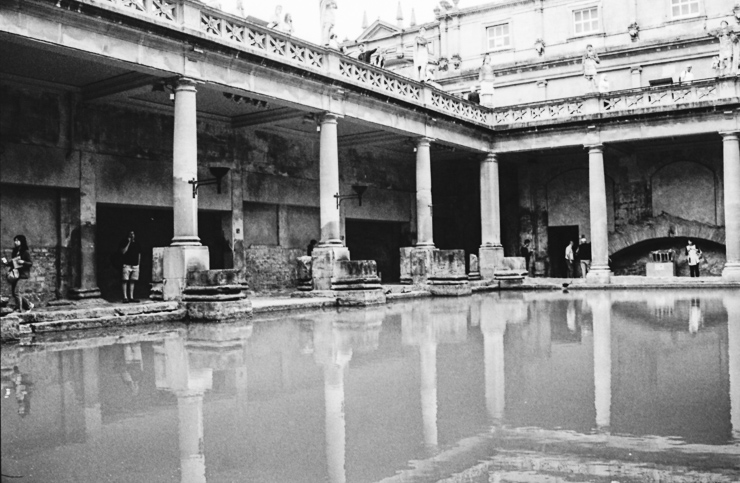 The exhibition then takes you underneath the bath to see some of the Roman ruins and architecture. 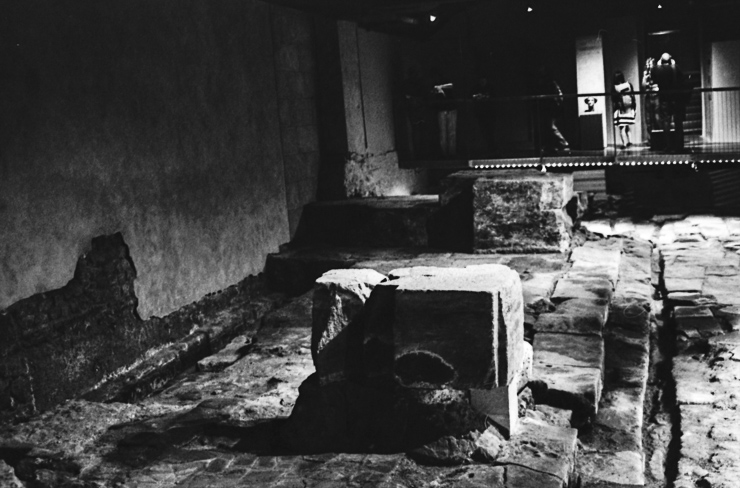 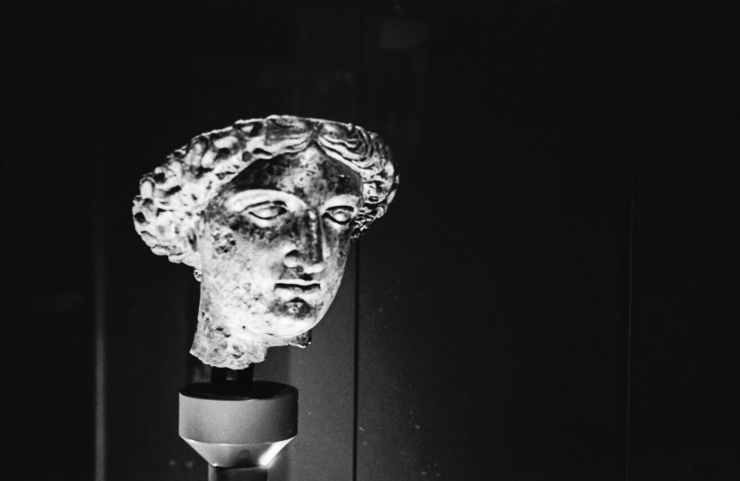 Outside it’s nice to walk around the often steep, small, and windy roads that cover the city. There’s a large river running through it offering historical and sight seeing boat trips and a nice path to walk along. 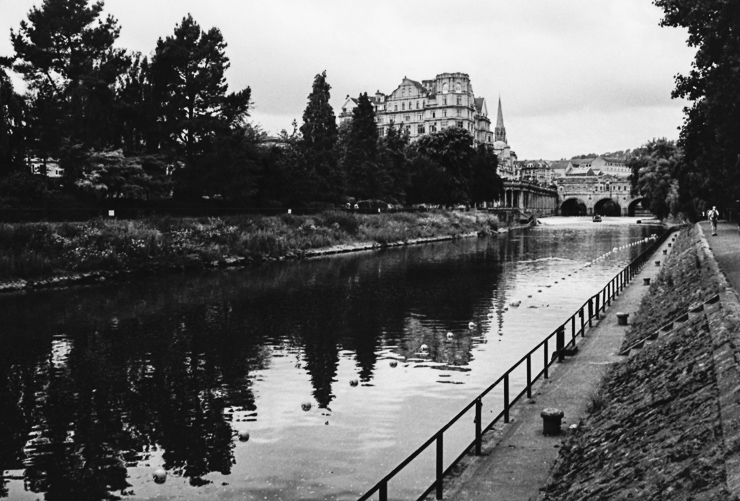 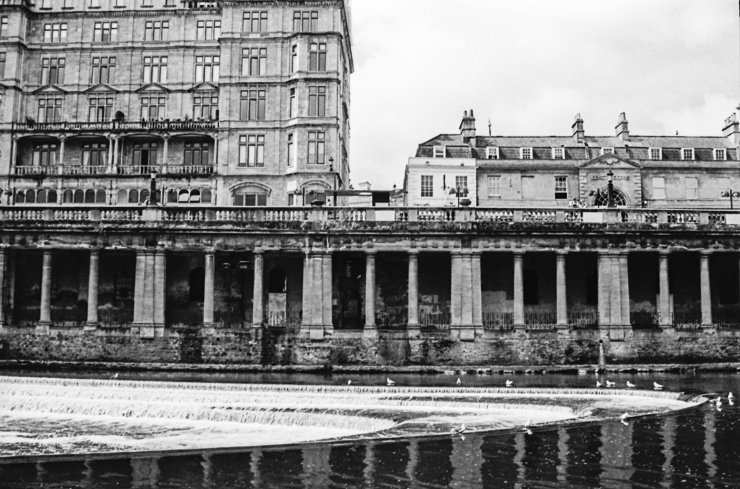 After we left Bath we headed south west to Cheddar Gorge, a place I have been a few times before and always enjoyed. It’s become more expensive recently and it’s definitely gets a lot of its trade from tourism but it’s a nice experience to see the caves, and especially to take a walk around the top of the gorge. There’s a steep staircase up to the top called Jacob’s Ladder and then a large spiral-staircased lookout tower where you can see for miles around. 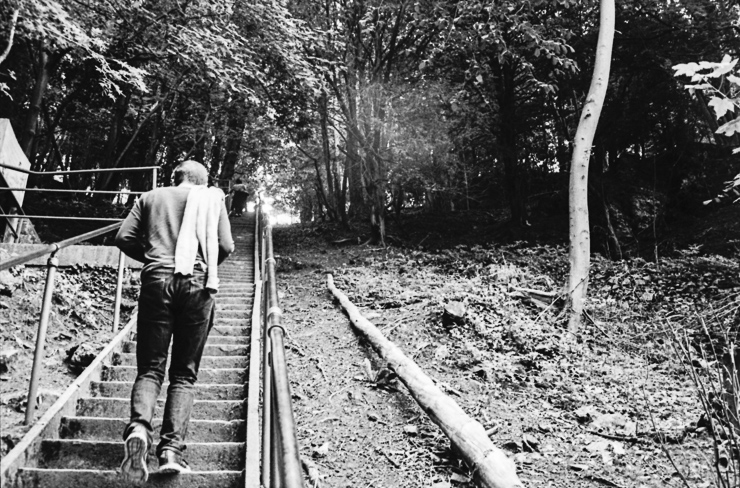 The view from the top of the tower is stunning. Here’s the town of Cheddar and their circular reservoir in the distance. 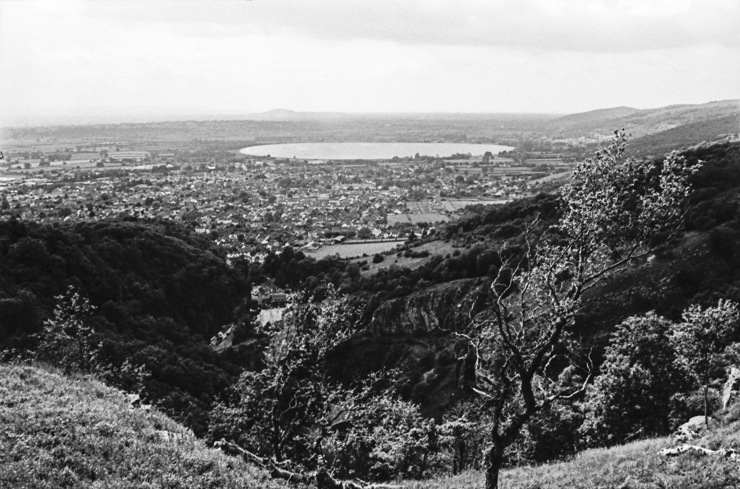 After walking for a while we took a break and sat down near the edge. That’s where I spotted this guy standing on a very precarious looking precipice trying to take a photo. 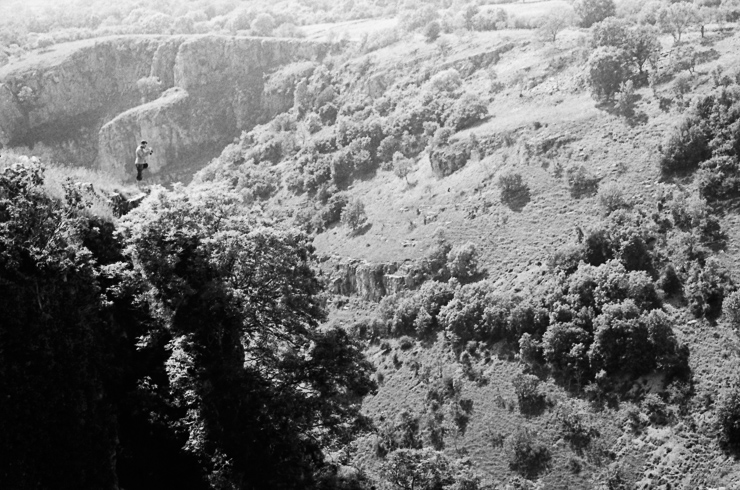 I have no idea how his shots turned out but he made a good focal point for mine! 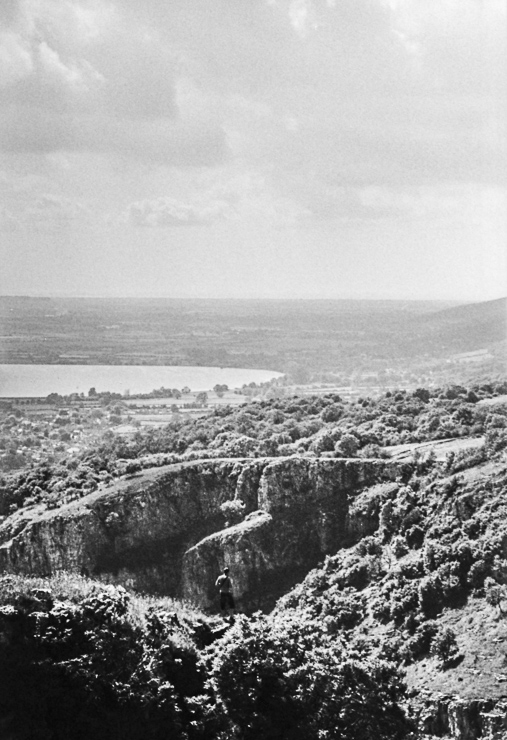 On the way back we headed back towards Bath to the small town of Lacock. It’s a small village that’s almost entirely owned and repaired by the National Trust, meaning it’s almost unspoiled and is a true sight to behold. It’s also the home of a very important man in the world of photography, Henry Fox Talbot. 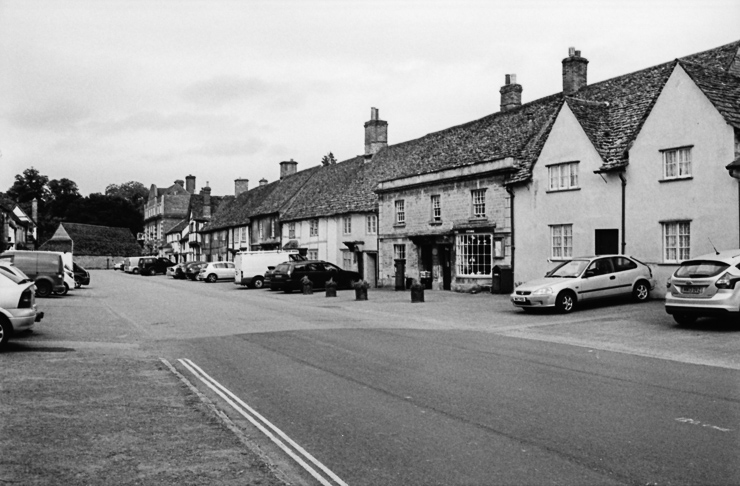 After Lacock we headed to our final stop before heading back to London, Stone Henge. The henge has become quite a guarded area in recent years. They have built a large car park and encourage people to pay to park there and then take the shuttle bus to see the henge itself. We parked in a little dirt track right next to the henge and walked to the field to the north and into the public footpath. The authorities had put up a large fence to try and stop people taking pictures of the henge from this path, deliberately obscuring the view of the henge for the non-paying customers. We met a guy there who was not at all keen with this raising of prices and who took great pleasure in showing tourists how to see the henge without paying any money down this track. I have to say that the view was definitely marred by the fence so it may be worth the money if it’s your first visit. You won’t get to see the sheep along the footpath though… 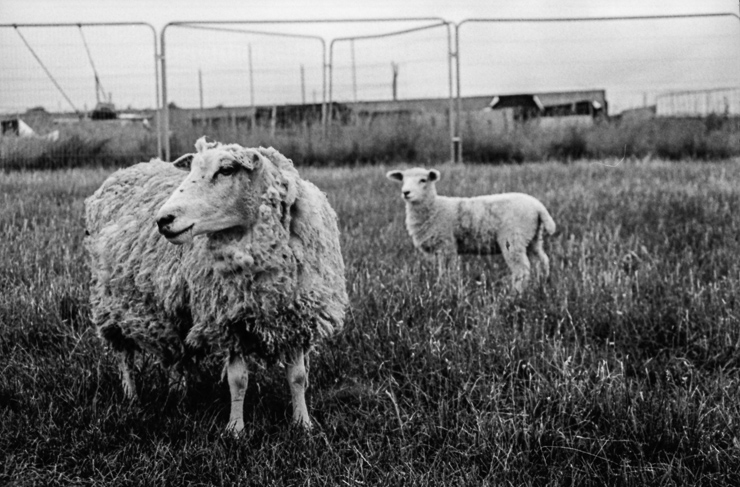 Here you can see the fence that’s been put up. It has a mesh netting over it to further obscure the henge from people on the path. 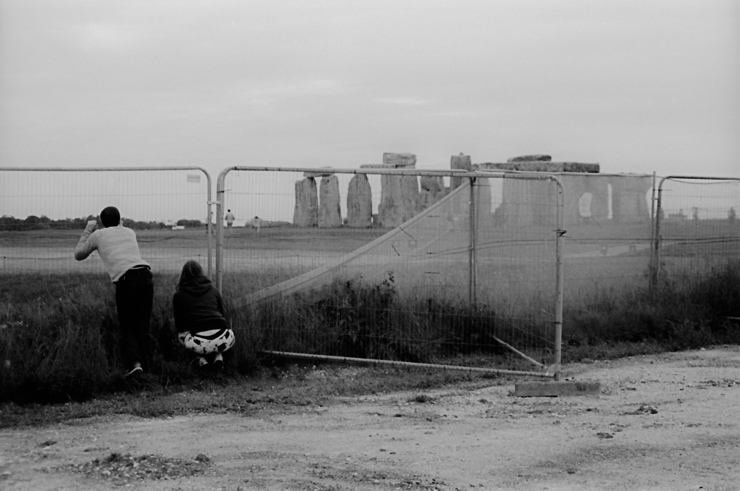 Headed back towards the car, the sun burst through the clouds that had been rolling in with some brilliant rays of sunlight. The photo definitely doesn’t give it justice. 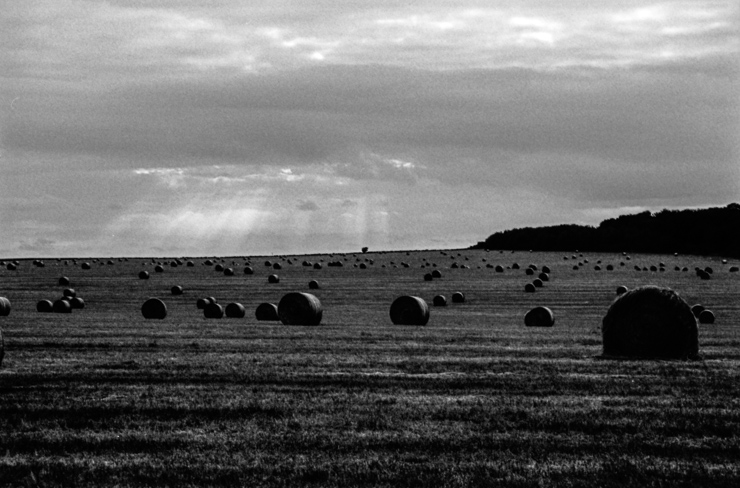 All in all it was an excellent way to spend a weekend. I’d happily go back and explore more of the Cotswolds!