If you don't know what a Bascule bridge is (I didn't), then check Wikipedia's article on them here. Bascule bridges are designed to allow unlimited vertical height with relatively low energy to open them due to the use of a counterbalance. This means they're particularly suited for bridges that tall vessels need to sail through. Here's a great example of one working at the Manchester Road entrance of South Docks that was completed in 1929, taken from Island History blog's (almost) 1000 years of the isle of dogs: 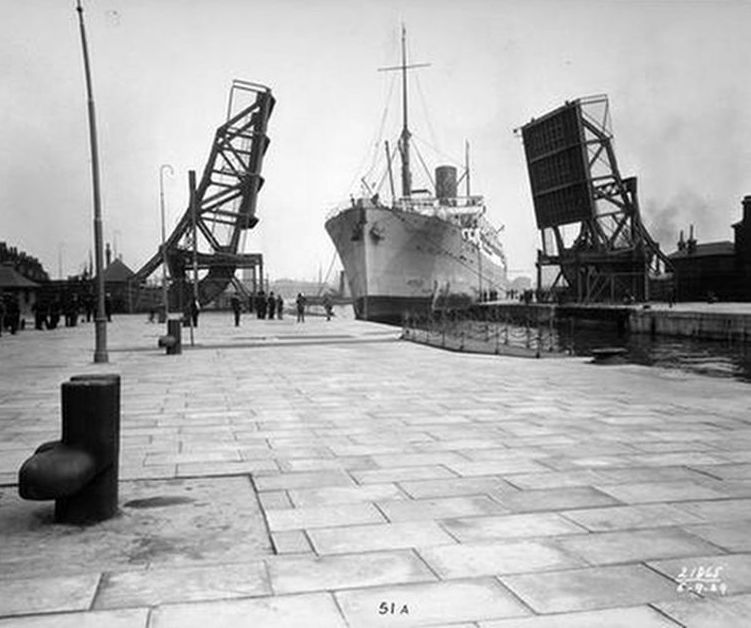 This particular bridge is a 'double leaf' Bascule bridge - which simply means there's two halves that both open. These are more accurately named "Scherzer rolling bascule lift bridges" after the American Engineer William Donald Scherzer who refined the Bascule design into the rolling lift bridge. The original Bascule design used a single large axle, whereas the rolling lift bridge has the weighted counterbalance that rolls back on a hinge.

The two bridges in Rotherhithe can be found on Rotherhithe Street near the Old Salt Quay and on Salter Road near the Surrey Quays Shopping Centre. Both are now historic remnants - neither are functional and if they were, you couldn't get very far. The Rotherhithe Street bridge no longer provides access to Surrey Water and the Salter Road bridge crosses a footpath from Greenland Docks to the shopping centre.

The Surrey Water/Rotherhithe Street bridge was built in the 1930s to replace a bridge over the original entrance to the old Grand Surrey Canal. The Salter Road bridge was apparently originally built in 1955 to cross Deptford Creek after the original double-leaf bascule had been damaged by German bombs in 1940, and this bridge was moved to Salter Road in 1959. The source report from the Works Construction Division Meeting on the reconstruction of Deptford Creek bridge from 4th January 1955 (DOI 10.1680/ipeds.1955.11867) page 314 describes a temporary steel single-leaf Bascule being built on a timber foundation while a double-leaf rolling lift bridge was constructed. Presumably since the Salter Road bridge is a single-leaf bridge this is that same temporary bridge that was replaced by the modern-day double-leaf bridge over Deptford Creek, although none of the other sources I could find on the movement of the bridge mentioned that this was only intended to be at Deptford Creek temporarily or give a reason for why it was replaced. There is probably some information missing here - the bridge is huge. I'm surprised it would be considered a temporary solution!

There's a great video from the opening ceremony of the Rotherhithe Street bridge which shows the bridge in operation as well as a tug towing barges full of timber into the Surrey Basin, probably headed for one of the six timber ponds as the area at the time was heavily involved in the timber trade. Here's the video:

I've highlighted the timber ponds that the wood could have been taken to and the location of the bridge from the video on a survey map from 1915 of the area taken from the Southwark Council Historical Mapping service. Please check that site out - it has several maps of the area covering 1896 to 2016 and is particularly interesting. 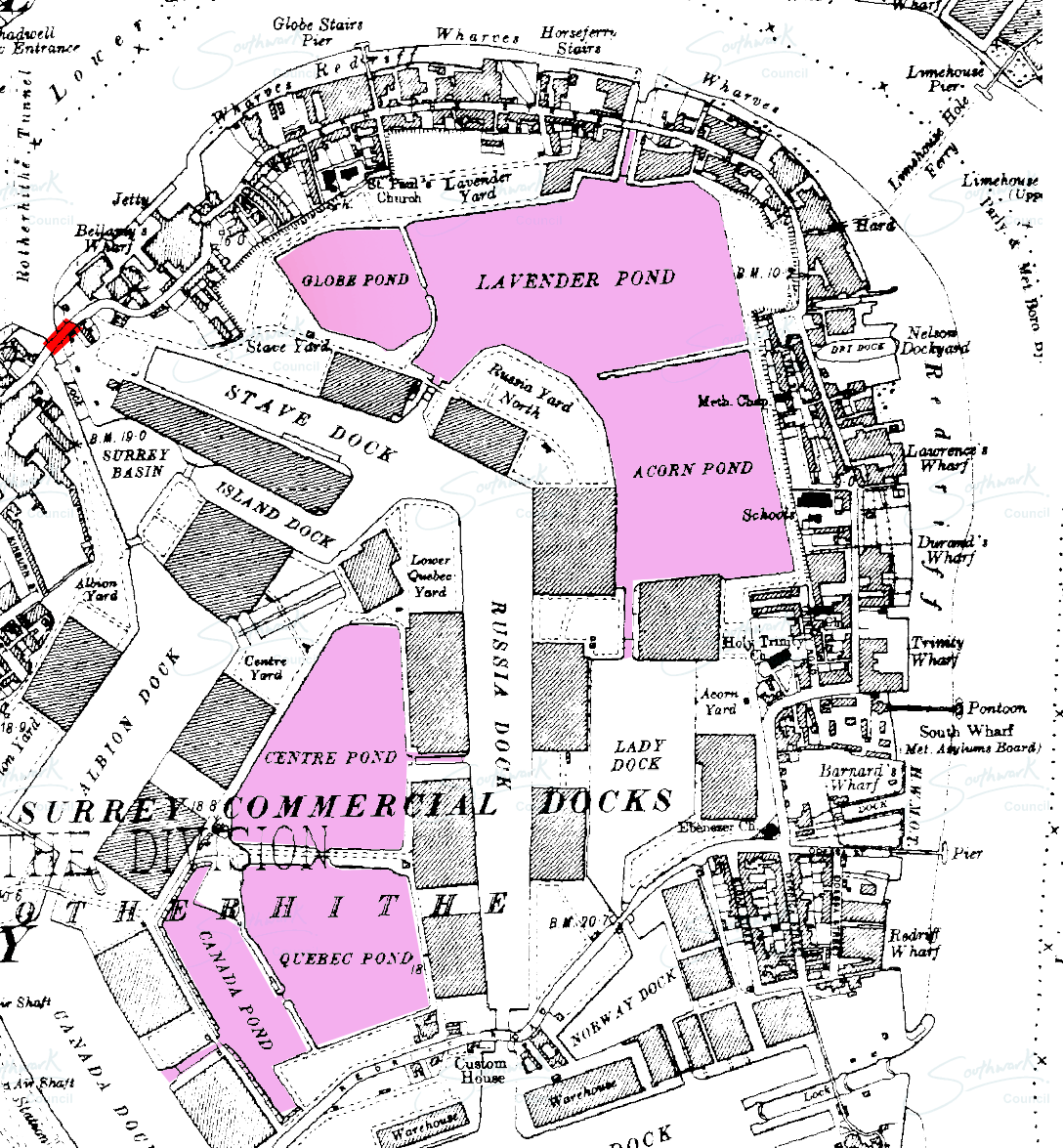 The Rotherhithe Street bridge didn't exist on the site at the time that the above map was created but I have included a map of the same area from 1938 with both bridges and all of the docks marked. It's interesting to note that this map shows several of the timber ponds had been completely removed not too long after the bridge was constructed (although it might be simply missing some of the ponds, since Globe Pond and Lavendar Pond still both exist in a diminished and non-commercial form now). The combination of maps shows how the landscape was changing during the lifetime of the bridges as the once thriving Thames-side industry changed and became modernised around them.

The Salter Road bridge connected Russia Dock and Greenland Dock. It would have supported much easier access to many of the warehouses and yards and the original bridge would have been built between 1895 and 1904 with the extension of Greenland Dock (see the map of 1896 and then the map of 1936 here). 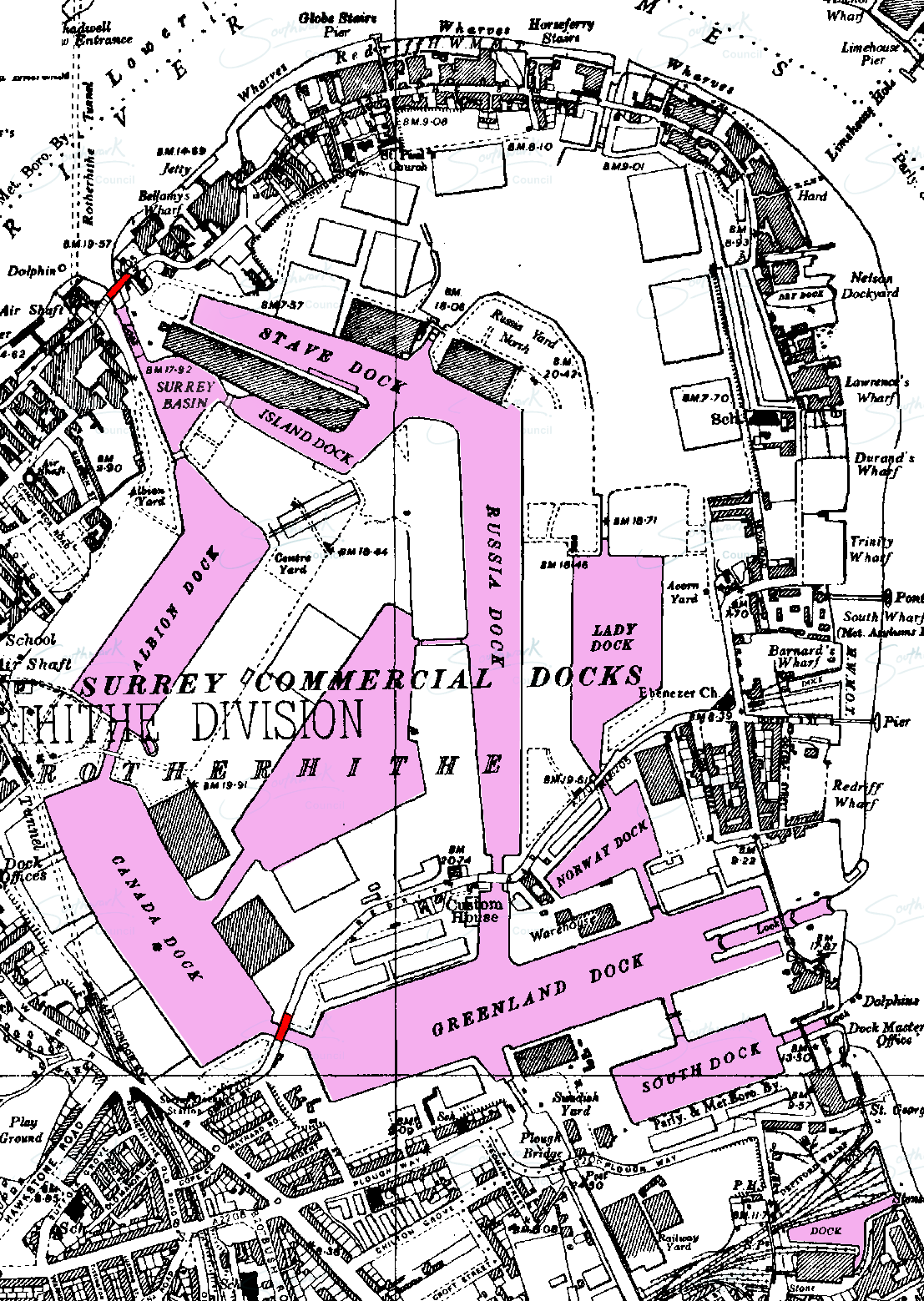 The declining body of water is an indicator of the declining industry in the area in general. At the risk of getting sidetracked I've included an excerpt from Southwark Notes' Some history and notes on the regeneration and gentrification of North Southwark & Bermondsey: Part One: 1900 – 1987 which is a really interesting read.

At the end of the Second World War, with an estimated 25,000 bombs dropped on it, much of Docklands had been destroyed. In Bermondsey, only 730 properties, out of 19,500, escaped war damage!

The next decade saw a radical reconstruction of the docking industry’s infrastructure and working practices. New facilities were built and newer working practices were introduced. Palletisation and fork-lift unloading saw the decrease in the number of dockers needed to handle goods and by the mid-60’s, the system of Roll-On/Roll-Off delivery was gradually taking over the traditional ways of delivering goods to London’s docklands. The rise in wage payments due to the decasualisation of labour in the 1960’s and an increasing awareness of the redevelopment potential of the riverside land was signalling the decline of the traditional worker-heavy industry along The Thames. By the end of the 60’s, with the change in goods transportation to favour large container lorries, the huge deep-wharf ports at Tilbury, further down The Thames estuary and the port at Felixstowe were taking the majority of the old London Docklands trade, the huge size of the container ships making them unable to reach the riverside docks in central and east London.

In Southwark, the large Surrey Docks closed to river traffic in 1970. The age of the riverside industry’s was almost over. With the changes in delivery systems, the old industries of North Southwark began to close down or relocate. It is estimated that half of the manufacturing jobs in Southwark were lost in the period from 1971 to 1986. By the mid-Eighties, all the local major manufacturing factories were gone leaving large areas of industrial wasteland. On the river, the empty wharves ran from Blackfriars Bridge to the middle of the Rotherhithe Peninsula. In the hinterlands, warehouses and factories that had dominated the local life of the area, stood empty and increasingly derelict. Alongside this, ran the closure of local shops and social clubs, cinemas and recreational centres, leaving housing estates often isolated in the middle of nowhere, especially in the eastern reaches of Surrey Docks.

I cycled up to the Rotherhithe street bridge a couple of weeks back with my camera and took a single shot which I've include below. I used a Sinar Norma with a Super Angulon 90mm f/8. The film was Fomapan 200 developed at home for the standard time in D76. It's in black and white since I'm learning the large format system and the film is much cheaper both to buy and to develop. Black and white film also makes making prints a real possibility once I secure some darkroom access. Once I get more experienced and have the chemicals for doing home colour development I would like to redo this shot in colour film, since one of the striking features of the bridge is its solid red colour. 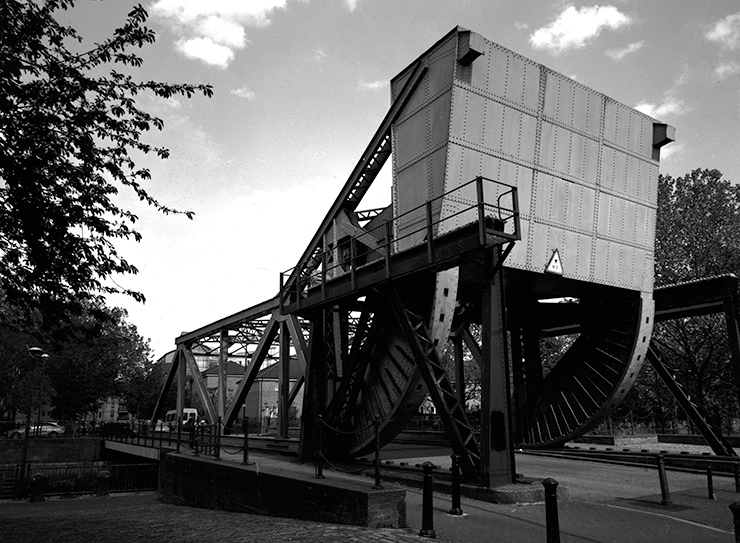 The picture shows the north face of the bridge and shows the rolling lift feature and the huge counterweight. In the curved section you can see rectangular holes which correspond to rectangular teeth on the ground below them. The bridge is static and is now used for pedestrian and bicycle access. Vehicular access to the peninsula is made possible by the more modern road at Salter Road just to the south.

Next are two shots of the bridge on Salter Road: 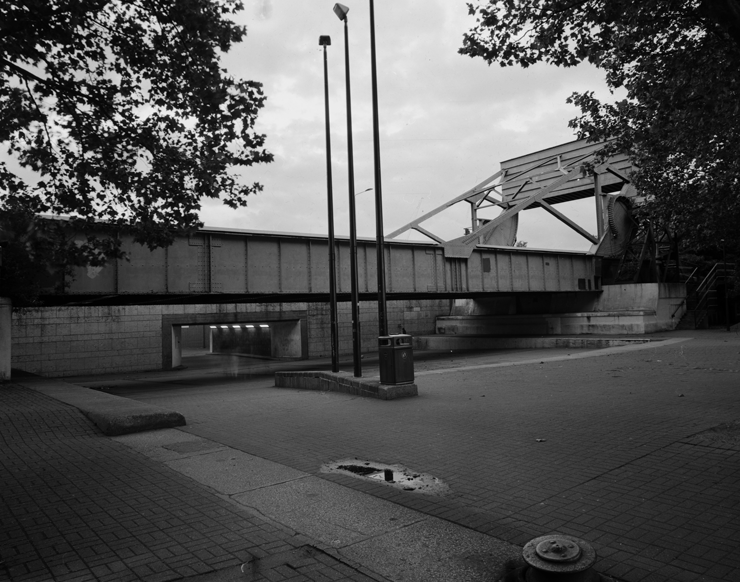 This bridge is also static and serves very little purpose other than being a reminder that once there was a bridge here. It is now entirely ornamental and neither foot nor vehicular traffic passes over it regularly (you can walk on it but the footpath does not traverse it). Just behind the bridge is Salter Road itself, and the tunnel you can see is a connecting footpath between the shopping centre at Surrey Quays and the residential estate of Greenland Dock. You can see in the foreground that is one of the few remaining clues to the original purpose of the bridge. From this angle it is easy to imagine the original waterway and how large (and tall!) the ships that would have been sailing through here could have been. 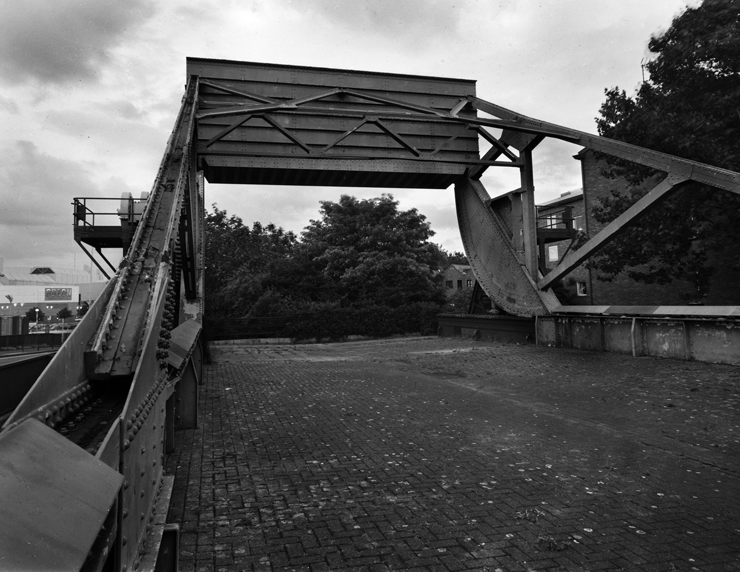 From above we can see this massive structure in more detail which has survived here almost graffiti free (there are some patches of white cover-ups but largely the bridge is all one colour) for over 50 years. In the background you can see part of the Surrey Quays leisure centre which now hosts a cinema complex, bowling facilities and a family restaurant. As I wasn't around before the redevelopment by the LDDC, I find it interesting to imagine what it would have been like before the shopping centre and before Canada Water existed. Before learning about the history of the area it seemed to me that it was unusual that such a large complex had been created to support what seemed to be a fairly small and not-very-population-dense residential area so close to the center of London. In reality of course I had it backwards. Rotherhithe has hundreds of years of maritime and industrial history alluded to by street names such as Temeraire Street and Brunel Road. Housing here was built to support both local workers and foreign sailors, and the docks were the livelihood for generations of people. Unlike many other residential areas, Surrey Quays in particular is relatively new, and simply exists due to a large area of land from a fading industry suddenly becoming available for houses.

If anybody has old photos of the area, particularly during or before the LDDC regeneration I would be very interested in seeing them. I have a pretty decent film scanner so I can digitise slides, 35mm, 126, 4x5 and 8x10, and possibly even 8mm video. Combining those with material from the Southwark Local History Library would make for an interesting post!

Finally, here's digital a shot of me and the camera, which is the only photo on this page that gives a good description of their faded red/pink colour: 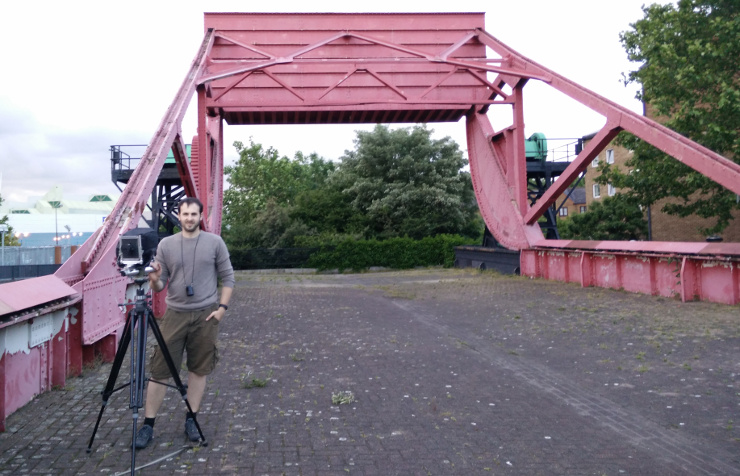