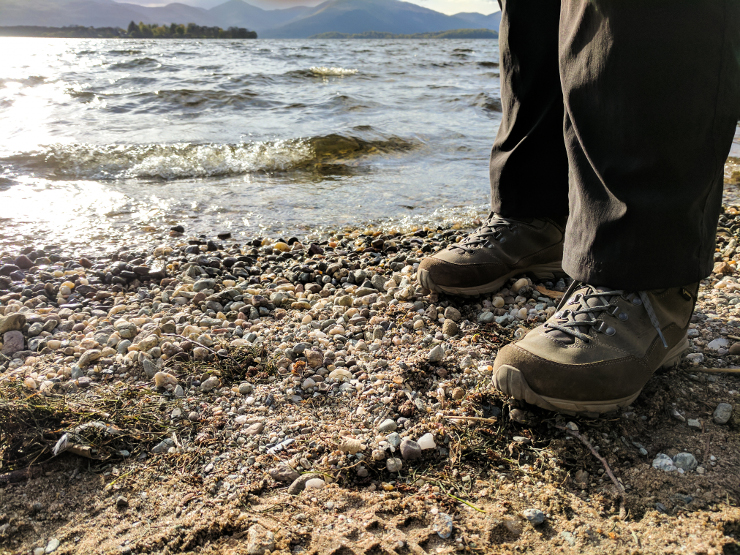 The West Highland Way is Scotland's first official long distance trail. It covers 96 miles between Milngavie (pronounced mull-guy) and Fort William, passing through some of the most stunningly beautiful scenery I've ever seen; rolling grassy hills, dense forest, and loch-side shingle beaches, giving way to sharp boulders, barren mountainsides, and rough fissures in the ground as you head North. It’s recommended to head northwards since the earlier stages are slightly easier, but can be done in either direction.

The Way is beautiful, well maintained, well signposted, and supported by a whole string of businesses along the entire route that help with food, accommodation, and supplies. I recently walked the WHW with my girlfriend and not once did we have to check a map or compass to figure out which way to go. If there was a crossroads it was always signposted unless it was unnecessarily obvious. Not once did we have to make a diversion due to the quality of track. Not once did we spend a day without passing somewhere that provided food or accommodation. If you haven't tried long distance waking before, the Way is a great walk to get started.

People come from all over the world to walk the Way, and on our journey we met Scots, Brits, Germans and Swiss, as well as some French and Dutch people. These people all seemed to have different reasons for the walk. I think there are many things that would attract somebody to try a long distance walk, and I’ve listed some of them below. If you want to see some beautiful parts of Scotland (and are OK with working to see them, since it is fairly physically intensive) then maybe one of these reasons is the right one for you. Scotland is beautiful

The scenery varies between green rolling, strong and bold, barren and wind-battered, and plain old unforgiving. It's a stark contrast to the flat streets of London. There are thick forests, huge bodies of water, far fewer cars, no light pollution so the stars are visible at night (so many stars!), and you're surrounded by nature the entire way. For me personally the most beauty was to be found in the absence of life - the bare, craggy mountainside and cliff faces. In these areas plenty of life does in fact exist, you just have to look harder to find it, and only the tough plants and creatures survive. The sights you see on the West Highland Way, particularly as you head further North, give a great example of the wilder side of Scotland.

On the way back from Fort William we took the Caledonian Sleeper train back to London in the evening. I guess the rut must have started, because as the train passed through more remote areas there were large groups of wild deer milling aid the stream beds or chewing on grass near the railway track. We probably saw a hundred deer before the sun went down.

As well as deer, we saw grey seals and an otter in Loch Linnhe and an osprey in Mugdock Lake.

It's a break from the office

I think everybody needs a break from work sometimes. It can be difficult to disconnect from work outside office hours - lying in bed or sitting on the train thinking about how to overcome problems or make plans for the next piece of work. When you're walking you only have two things in mind - your surrounding environment and putting one foot in front of the other. Your only goal is to get to your destination for the day while staying warm and dry, drinking enough water, and eating enough food. It's incredibly freeing to not have a mind clouded by problems. 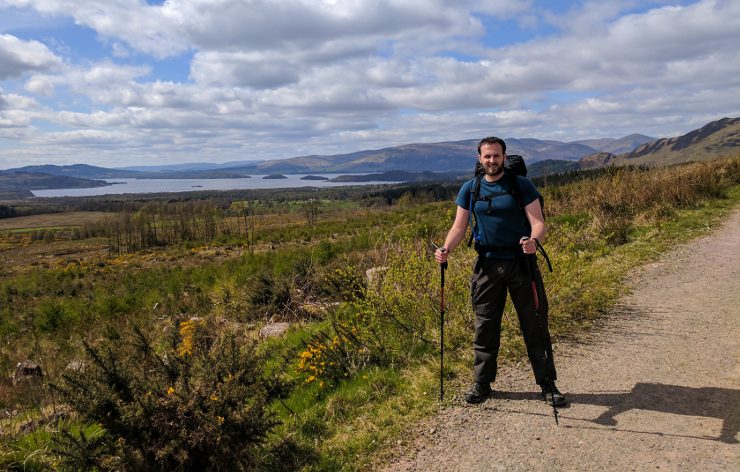 The West Highland Way is tough, but you don't need to be too fit or train before to attempt it. There's a several hills and stair cases, but most of the track is flat or has only very shallow inclination or declination. It's suitable for anybody who's fairly fit and has a lot of support services so you can essentially carry whatever you want. If you can carry a small backpack with a fleece, water, and rain clothes then you'll be fine. The real pressure isn't the walk, it's getting up every day knowing you have miles to go, knowing it might be cold or wet, hoping your feet don't get blisters, knowing that if you start late you might be hungry come dinner time. There's​ both a physical and a mental challenge, and by overcoming it you gain the knowledge that you did it, that you could do it again, that you can trust yourself, that you can do anything. It's incredibly exhilarating. 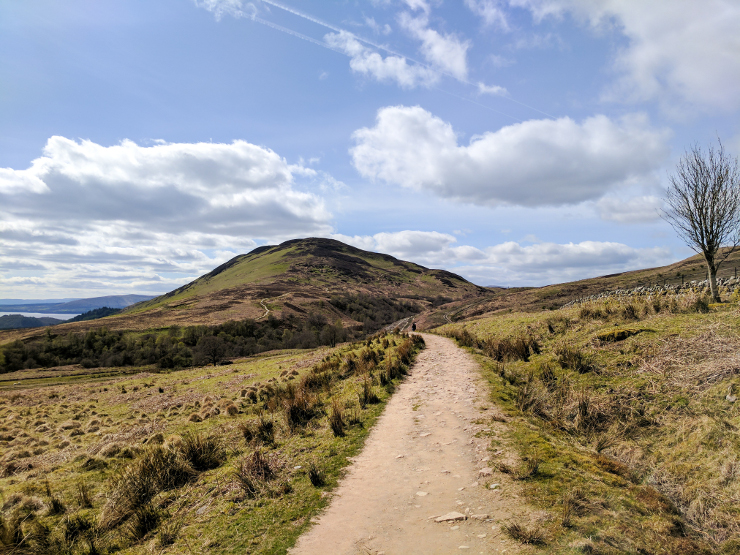 This is an unusual one, but one of the girls we met was doing the West Highland Way to raise money for charity. She’d set up a way for her friends and colleagues to sponsor her, and she said that when she realised how much money she’d be making for the charity it made her more and more determined to reach the end in the time she had.

The West Highland Way benefits from being a well known route. There are common itineraries and week known places for accommodation. This means that the chances are you'll meet several groups of people that you'll overtake and be overtaken by multiple times asking the way. You'll see them in pubs and in hostels, you'll help each other with water or information or players. You'll not see them for a couple of days and then there they'll be up ahead on the track.

During our own walk we met several groups, and had the opportunity to have chats and have meals together. Everybody you meet shares a common goal and nobody we met was unfriendly or uninterested in a chat. They might not turn into long lasting friendships but the human social element of the walk, facilitated by the well known pubs and cafes along the way, was an important part of the experience for me. I found myself feeling concerned about how the other walkers were doing. We shared contact details with people on the trail, and while we didn't complete the walk ourselves (we ended up taking a bus part of the day, getting into Fort William before anybody in our wave), we all met up again when they caught up and had a meal together. 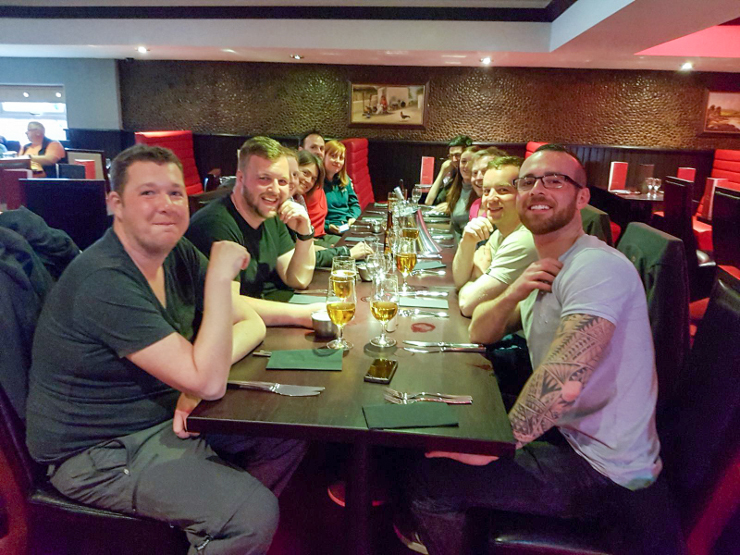 This kind of thing never happens to me in my day to day life. In London at least there's a huge void of human contact where everybody's busy or too absorbed in their own bubble to stop and chat.

It tests your relationship

Long trips with other people are always difficult. I wanted to do this walk ever since a colleague recommended it, and some way through the planning I invited my girlfriend Julia to come with me. Spending a long period of time very close to somebody is always problematic as people get tired and tempers fray, so we knew this was going to be one of the hardest things we’d ever done together. Added to that, neither of us is very fit, but I think that I was more determined due to being the one who organised​ everything. I'm also much more stubborn and more interested in challenging myself to finish the job. At some point during the walk it became a bit too much. We’d had some trouble with the walk and every decision we made led to something going wrong. We’d brought too much stuff making our packs heavy, we camped when the temperature hit 2c and our sleeping bags were rated for 10 and 15, we’d been woken up in the middle of the night by the police with a German shepherd, we always started later than we’d liked meaning we didn’t make it as far as we’d like, and we struggled with the ascent up Conic Hill. We decided to call time and take public transport the rest of the way, which gave us a few unexpected days of relaxing in Fort William, allowing us to visit local attractions and activities. Despite having a fairly emotional time and nothing going to plan we both enjoyed ourselves a lot and the experience has made our relationship stronger because of it. 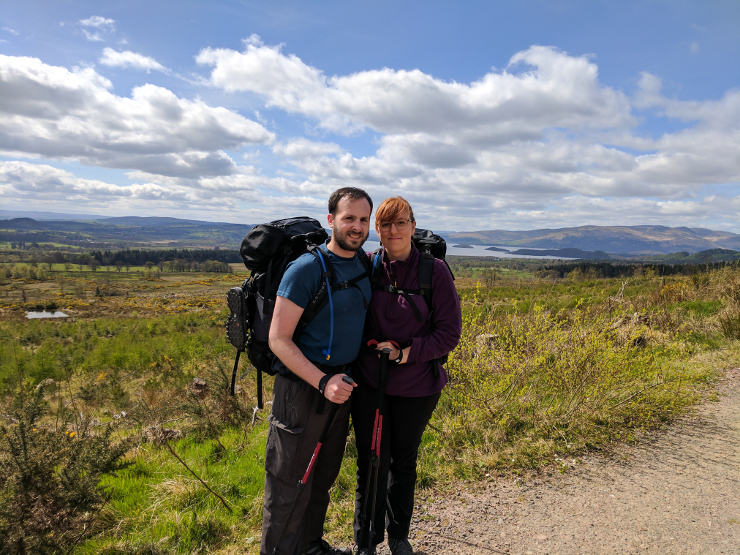