I've now finished scanning my photographs from week 1 of my 52 rolls project. I shot two rolls this week, partly due to me having purchased a new camera that I wanted to test. I've included a selection of the photos below.

Film one was the wonderful Ilford Delta Professional 400, shot at boxed speed. This was a brand new film that I had fresh in due to participating in emulsive.org's 2017 Delta Def Jam event.

I started with a walk around Maritime Greenwich which is close to where I live. The first shot is the front of the iconic Cutty Sark, which was restored a few years ago after much of it was damaged in a fire. 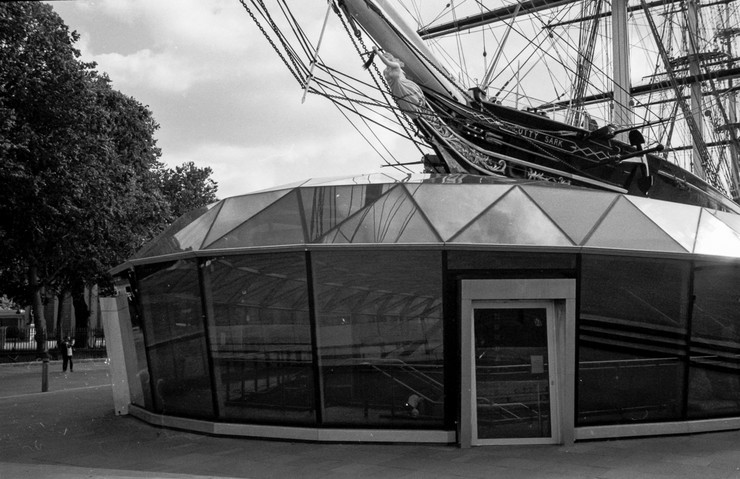 The whole of maritime Greenwich is very pretty, in particular the nearby Painted Hall and the Old Royal Naval College - shown in the next photo. This one has obvious signs of not drying properly - I developed this film at home and despite using some Ilford Wetting Agent it seems to have still got some drying marks. My kitchen is no match for a film drying cabinet. Despite the mistakes in the negative, I am always a bit in awe at the architecture that they portray. The architecture was designed by Sir Christopher Wren (the man behind St Paul's Cathedral) and Nicholas Hawksmoor and is awesome to behold. 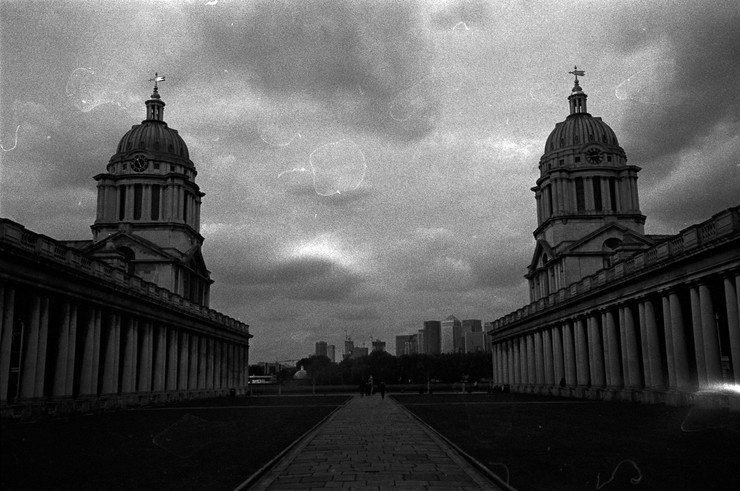 You can see the Canary Wharf buildings in the background of that photo - a very different area to Greenwich. From the top of the hill in the park there's a viewpoint where you can see the towers of the financial center in all their glory. 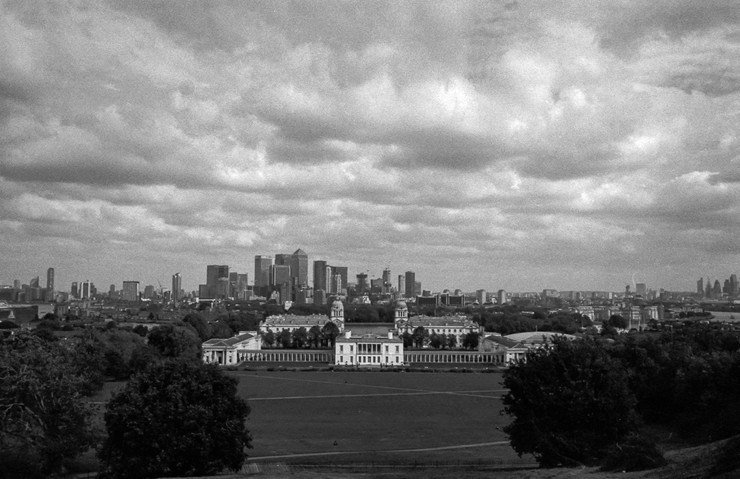 There's also the Royal Observatory building which has a statue of Yuri Gagarin, the Soviet pilot and cosmonaut who was the first man to journey into outer space. 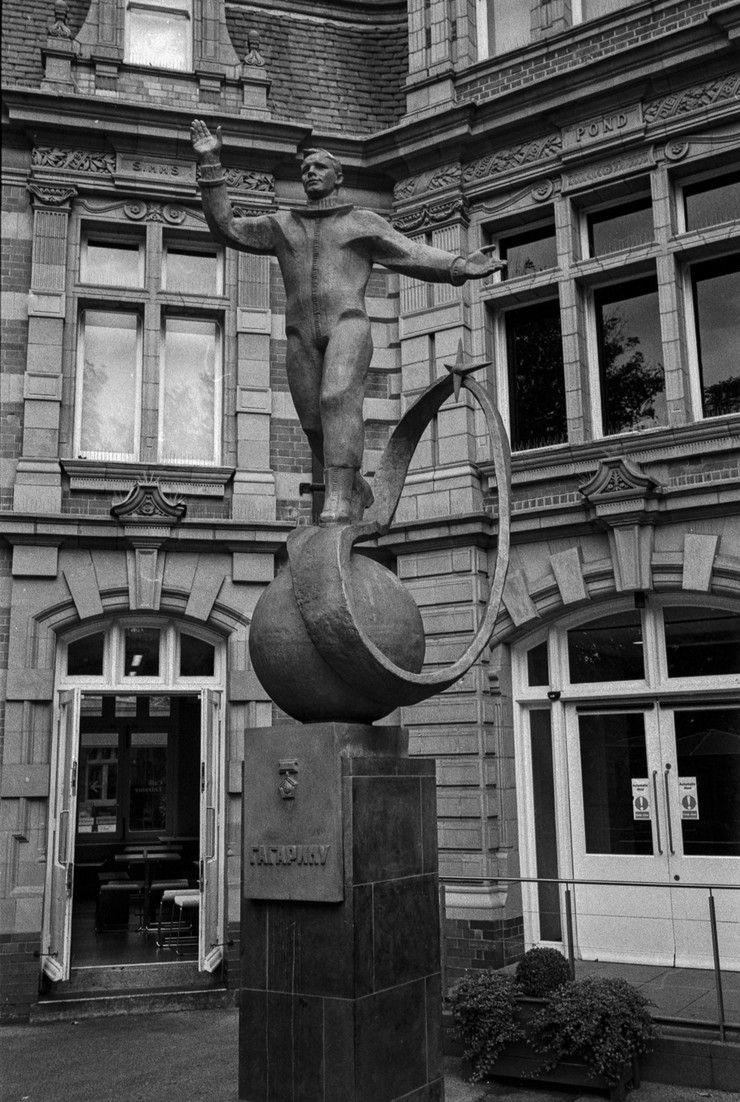 I also took some photos around St Paul's cathedral as it's quite close to my office. Here it is in the background from a side street: 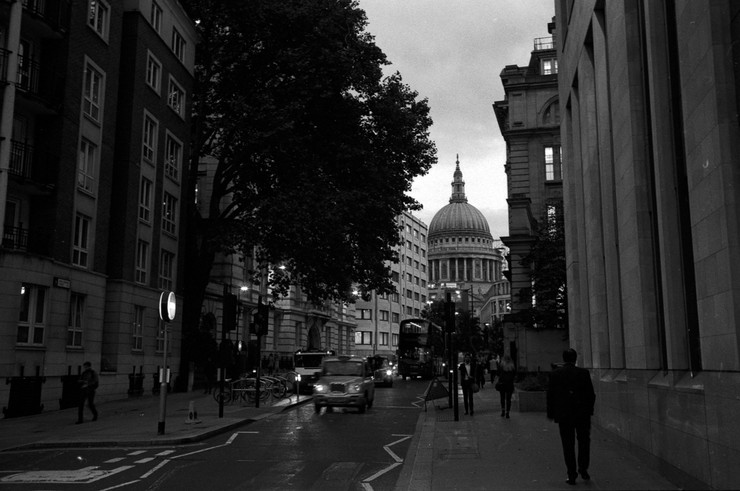 And here's probably my favourite shot from the walk, a young lady sitting on some steps on the side of St Paul's. 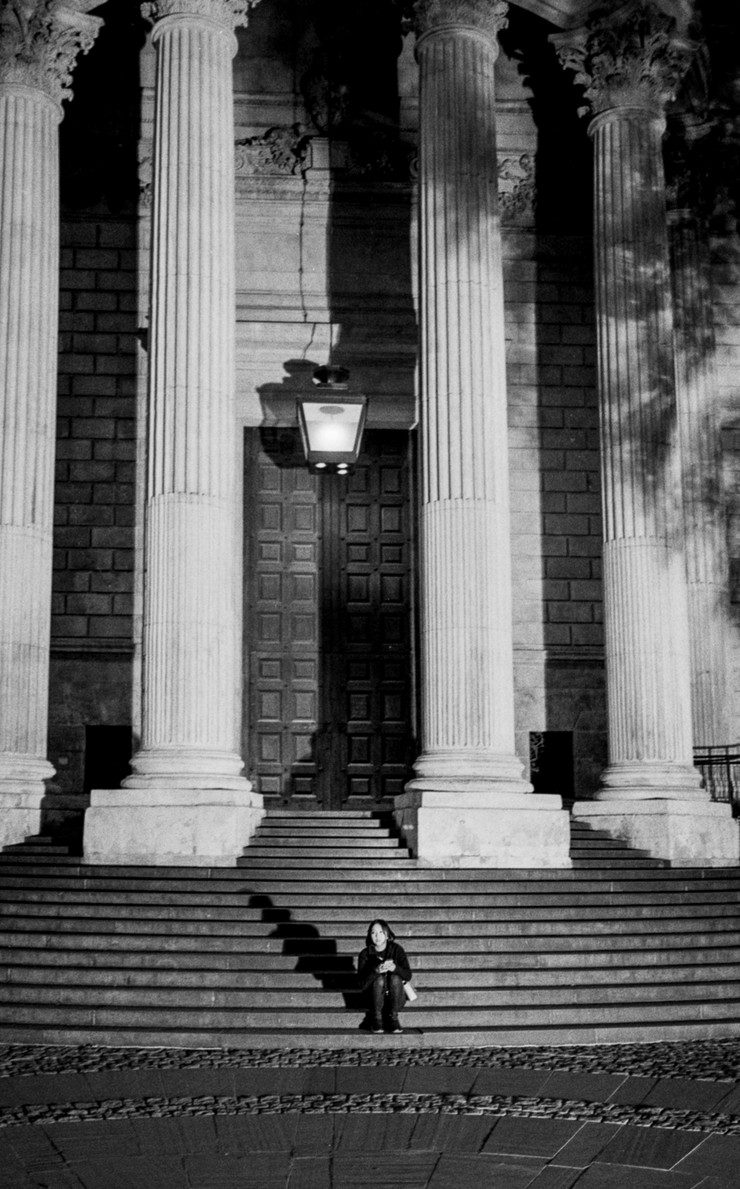 The next photos are taken with Ilford's HP5+ film, which I have a bulk roll of because I love the way it renders. We took the tube to Westminster and walked along Whitehall towards Trafalgar Square. Big Ben (or more accurately the Elizabeth Tower) is currently undergoing a multi-year renovation project and is surrounded by scaffolding: 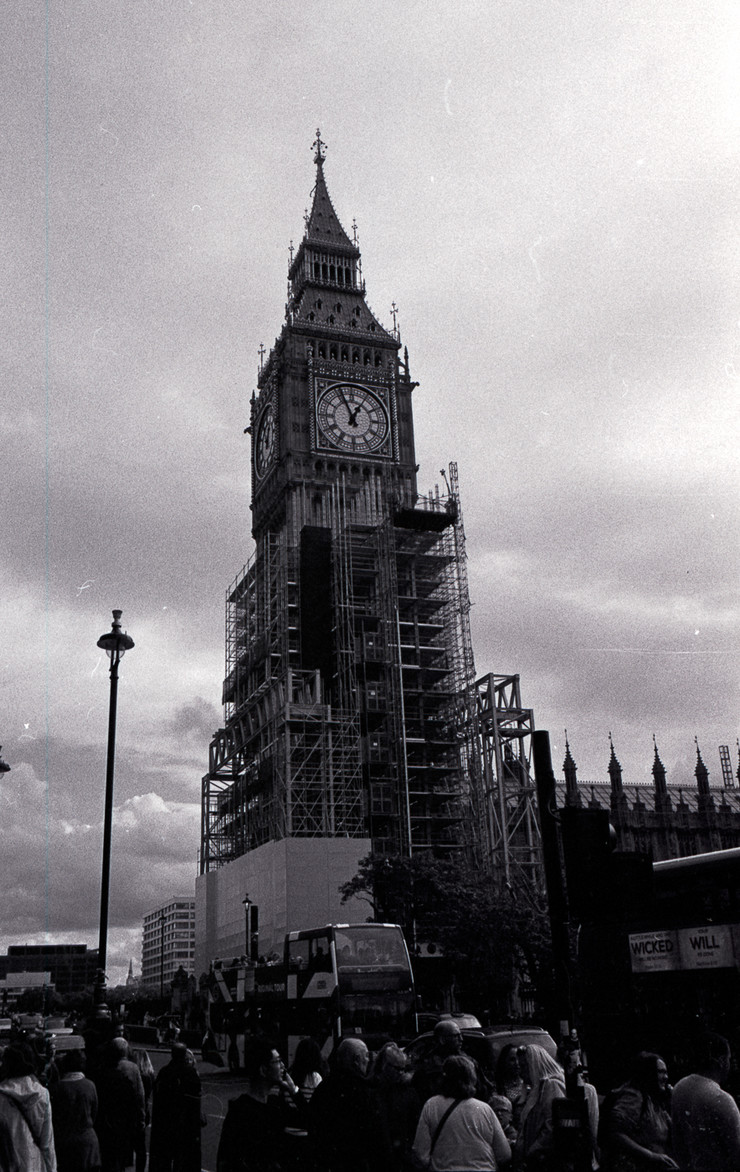 There was a pub with some Morris dancers giving a performance, a traditional English folk dance that is quite uncommon to see outside of country festivals. 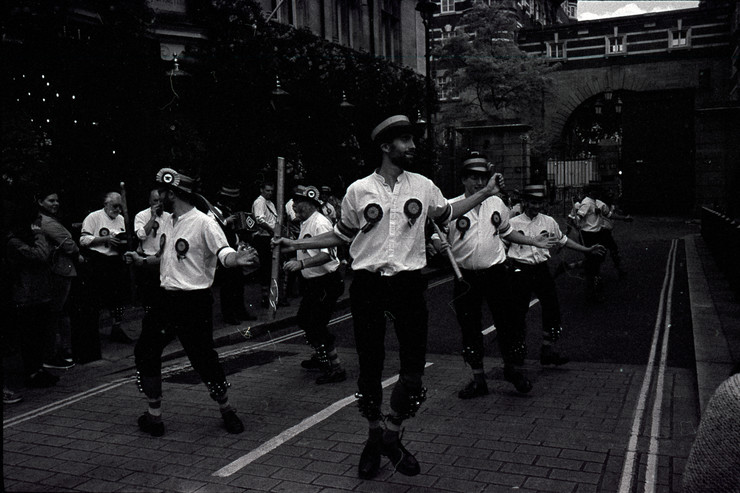 Trafalgar Square is usually pretty busy and this was no exception. During larger festivals there's often stalls and a stage that is erected and large crowds gather to see shows. 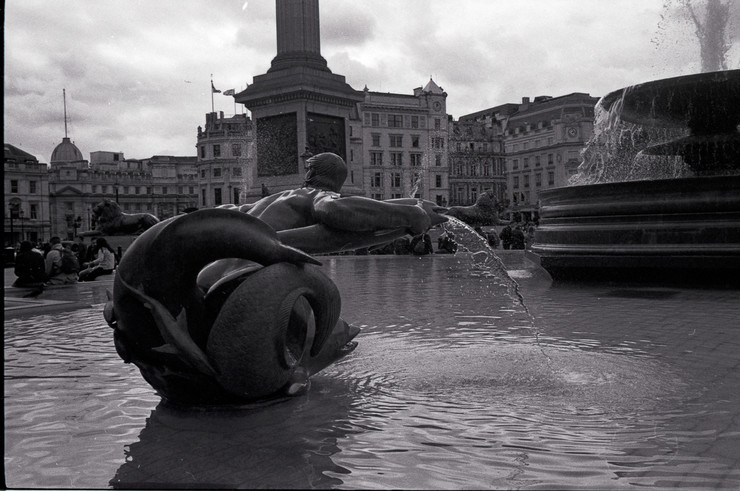 Slightly north of Trafalgar Square is Chinatown, where many decorative lanterns had been placed in the streets. 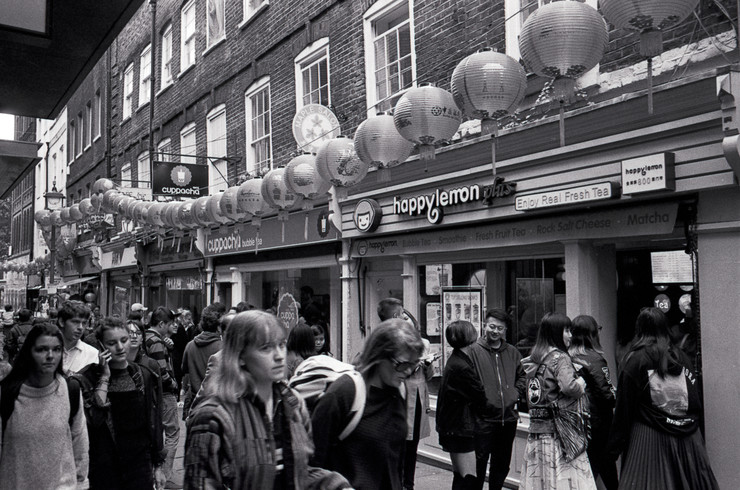 I'm not sure what the event was, but they had a lot of lanterns! 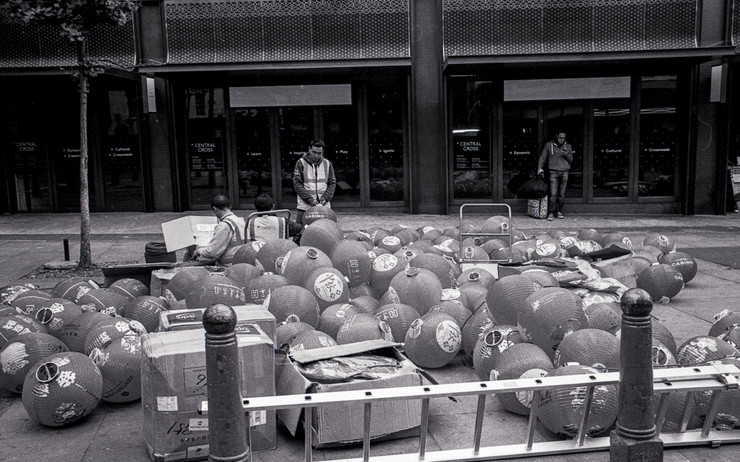 Finally, we went for a walk around Regent's Park, where the Frieze Art Fair was happening, which meant the park had been adorned with statues and sculptures, including this elephant standing on its trunk. 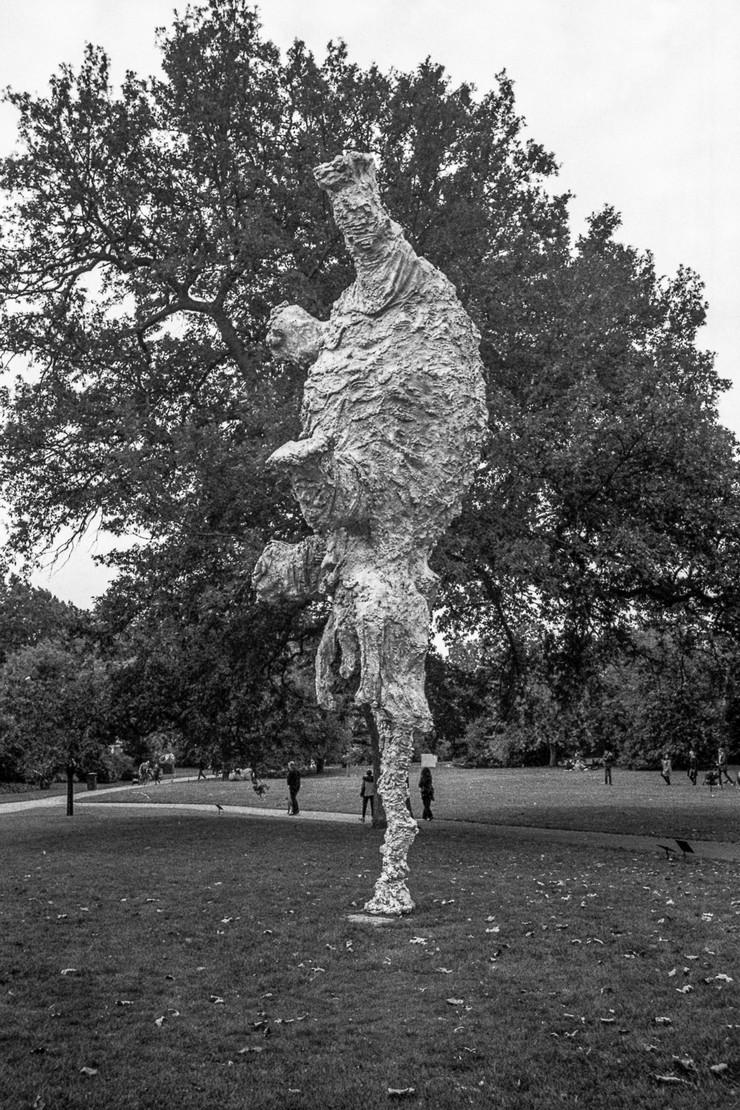 The park was very pretty with autumnal colours and leaves falling everywhere. The last picture is one of my girlfriend Julia who was walking with me - it's a nice shot and it also gives a good example of the rendering of out-of-focus areas in the 35mm Summicron-M ASPH. 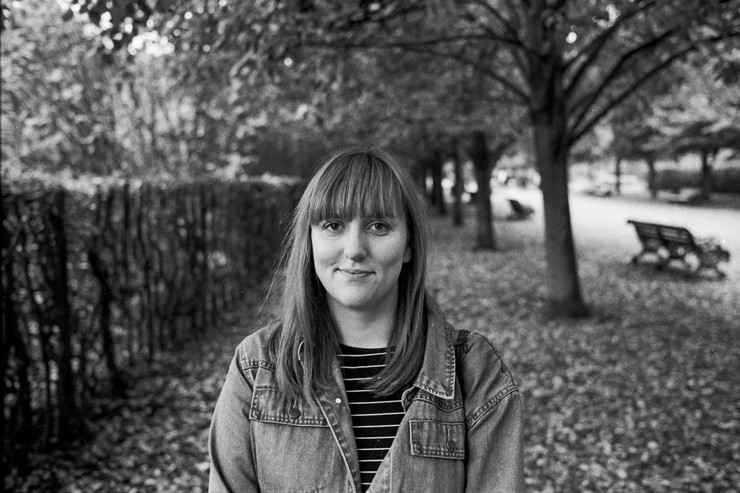