Welcome back for Part 2 of my post on my trip to Warsaw with a Leica M6 TTL, a 35mm Summicron ASPH, some Kodak Portra 400 and a roll of expired Fuji Superia 1600. I finished Part 1 saying that I need to spend some time understanding the meter as I’ve had a few photos that are very underexposed with bright light sources in them. I can say, however, that it performed well in dark areas. I’m really happy with this photo of Julia which was taken in very subdued light with the Superia inside the Royal Castle, which has an impressive gallery of art and period rooms. 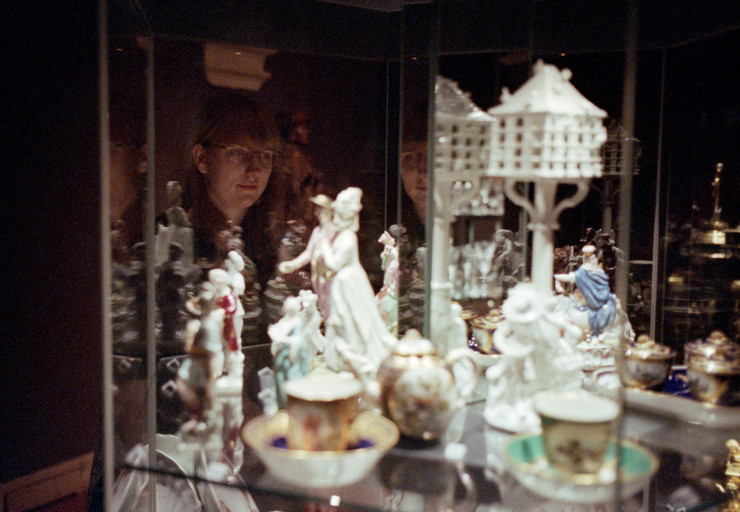 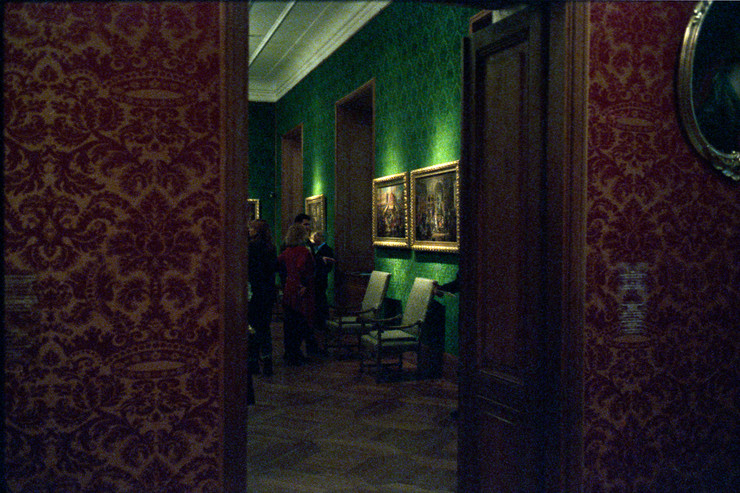 This photo didn’t come out so well, and highlights another problem that I need to improve on: not looking at things straight on. The perspective here causes the image horizontal lines to converge to the left. Had I been parallel to the photo, this wouldn’t have been a problem. I took this photo in dim light and mostly for comedy value: I couldn’t resist taking a photo of a painting of a collection of paintings. 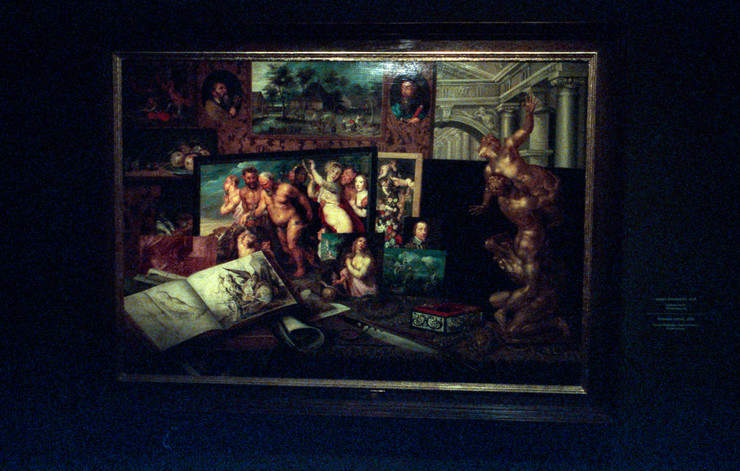 All of the photos so far have been on the old town side, the site of the historic city of Warsaw.

Crossing the river you head towards the Praga district, which used to be a separate town that has been consumed by the Warsaw municipality. There’s an entirely different sense of belonging in Praga and it’s definitely worth visiting. 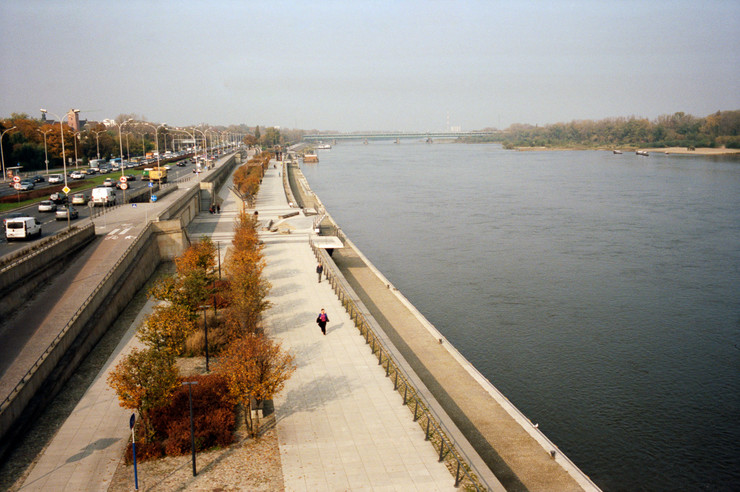 Just before the end of one of the many bridges, I spotted these white body outlines on a path: 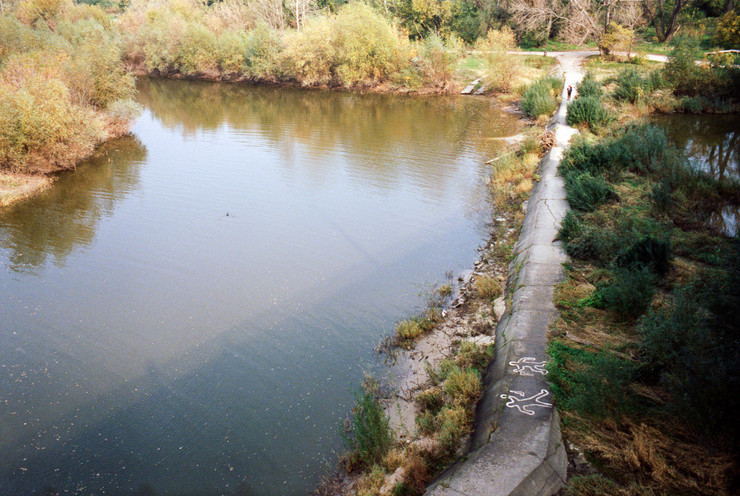 I am hoping that this is a piece of artwork, given that there’s two figures in children’s book poses with what appear to be outlines of weapons next to them. I thought it made a nice photo with the figure further up the path.

The buildings in Praga are typically much older than those on the other side of the river. Most of the buildings that were destroyed in World War Two were on the Warsaw side, and so many old buildings in Praga survived. You can also see here many garish soviet-era housing blocks (not like the one in the photo below, which looks much more modern!), and there’s a regular theme of new buildings right next to old. 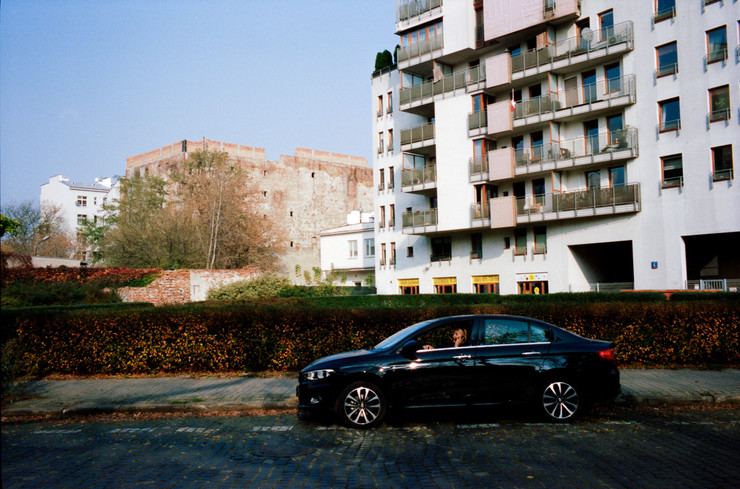 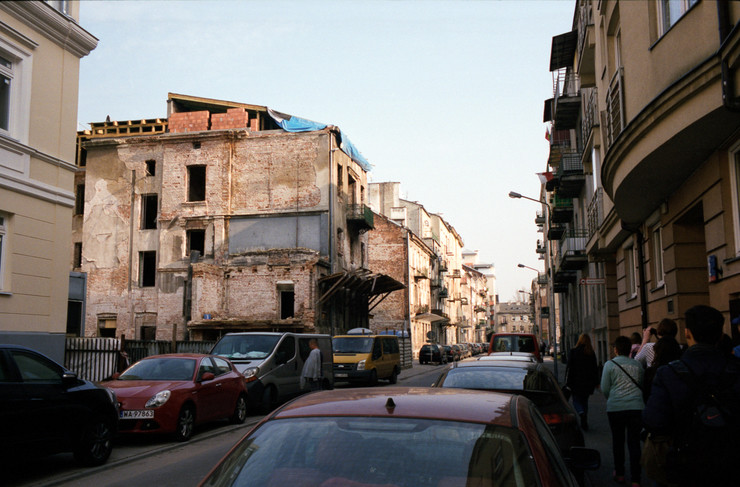 There are buildings here that still have bullet holes in them from when German soldiers were shooting at the resistance fighters. There’s also more artwork and graffiti. Our tour guide described it as an area undergoing change but with a strong sense of identity. Artists and creative people were moving in and she described it as like Kreuzberg in Berlin might have been twenty years ago. 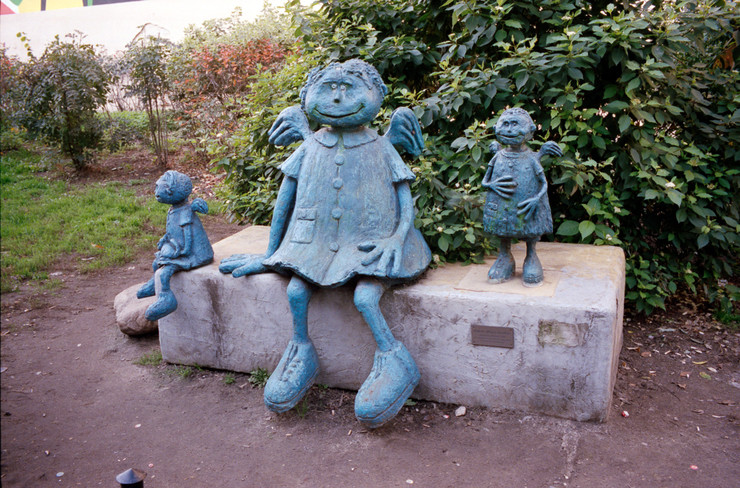 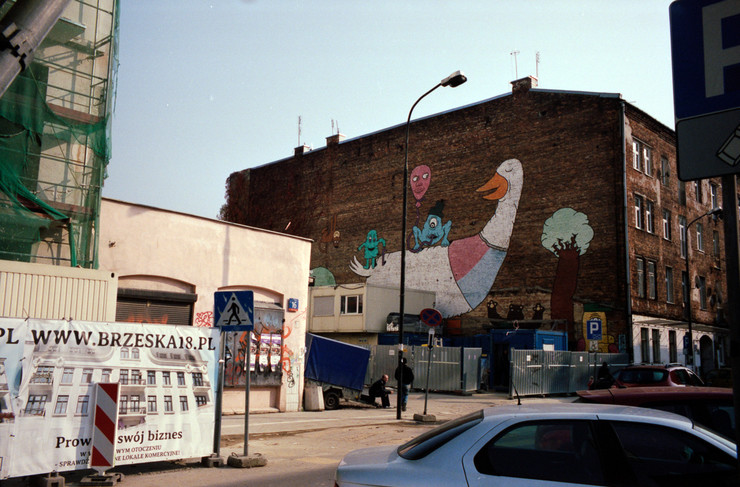 This area has a reputation of being unsafe, but while caution is always a good idea, we didn’t feel unsafe at all. There’s a strong sense of community here and according to our tour guide people tend to identify as from Praga, not from Warsaw. They have their own coat of arms with a mermaid holding a sword and shield, and a small island housing three brown bears, which is used to rear the bears before sending them to zoos. Apparently the current batch are the last batch of bears to be brought up here, as people are becoming less and less fans of seeing animals such as these kept in captivity on public display next to a busy road. 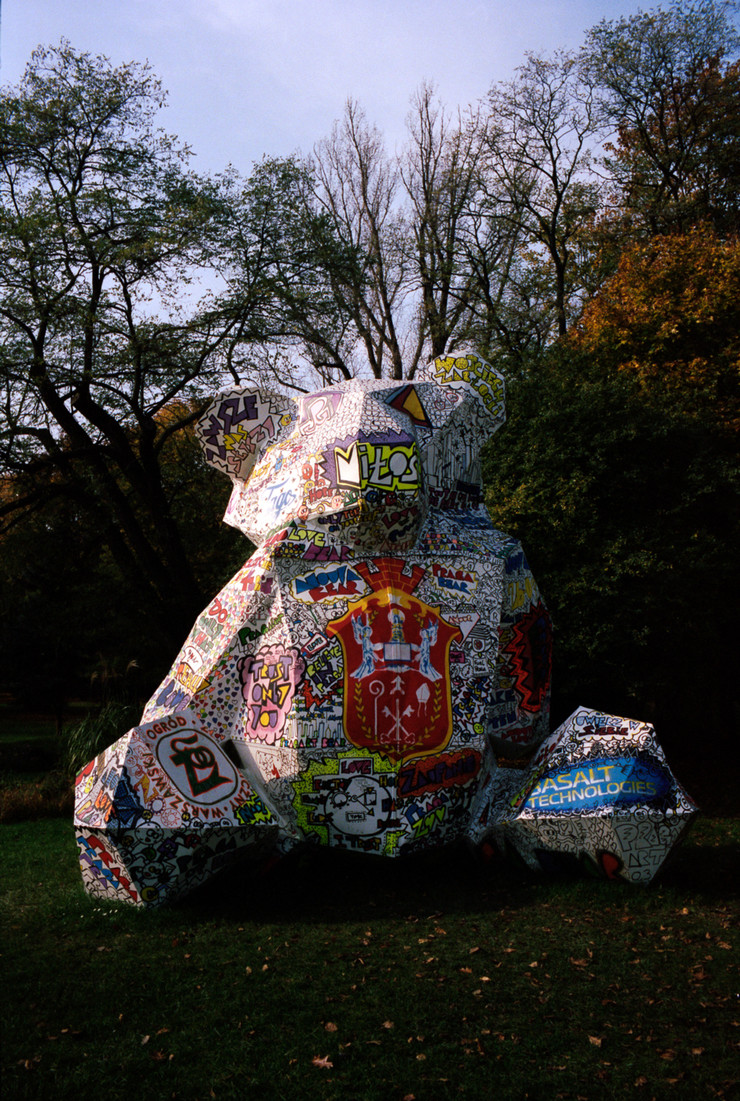 Praga does have a bunch of interesting places, including this old market area that used to be the go-to place for all things from cigarettes to guns. Apparently, if you needed anything, you could get it here. When we visited the area was quiet - partly due to it being a weekday and partly due to a decline in popularity. 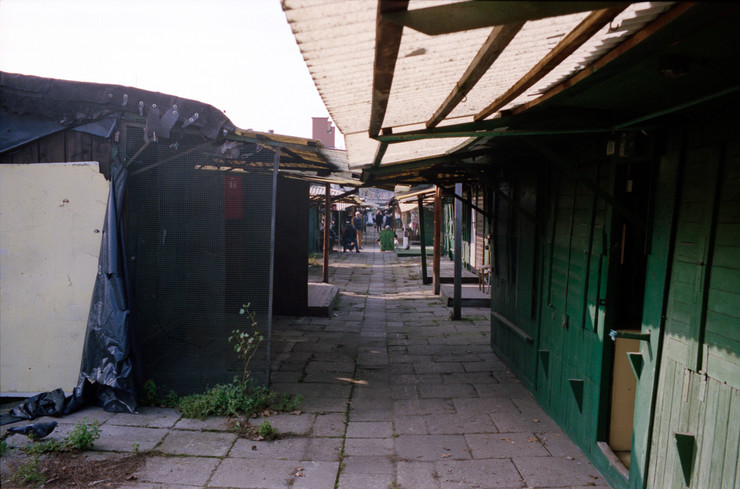 We didn’t see much for sale, although one woman was selling wedding dresses. 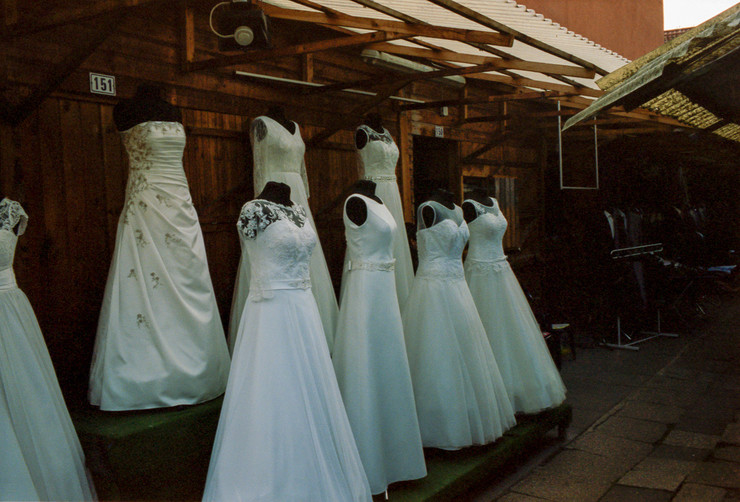 There’s one other interesting thing I took photos of - the Palace of Culture and Science. This building is (in my opinion) a monstrous construction that is completely unlike anything around it. The building was a gift from Stalin that’s much better explained here, and to the casual tourist it’s a real curiosity. These photos were both shot with the last few shots on the Superia 1600 on a wet and rainy day. 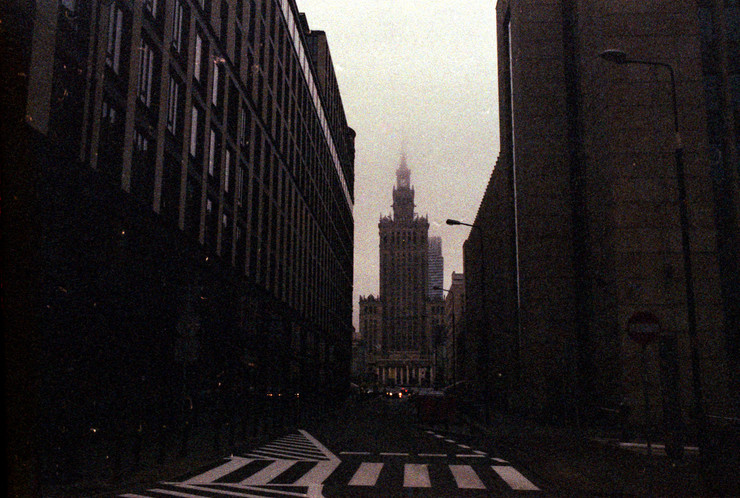 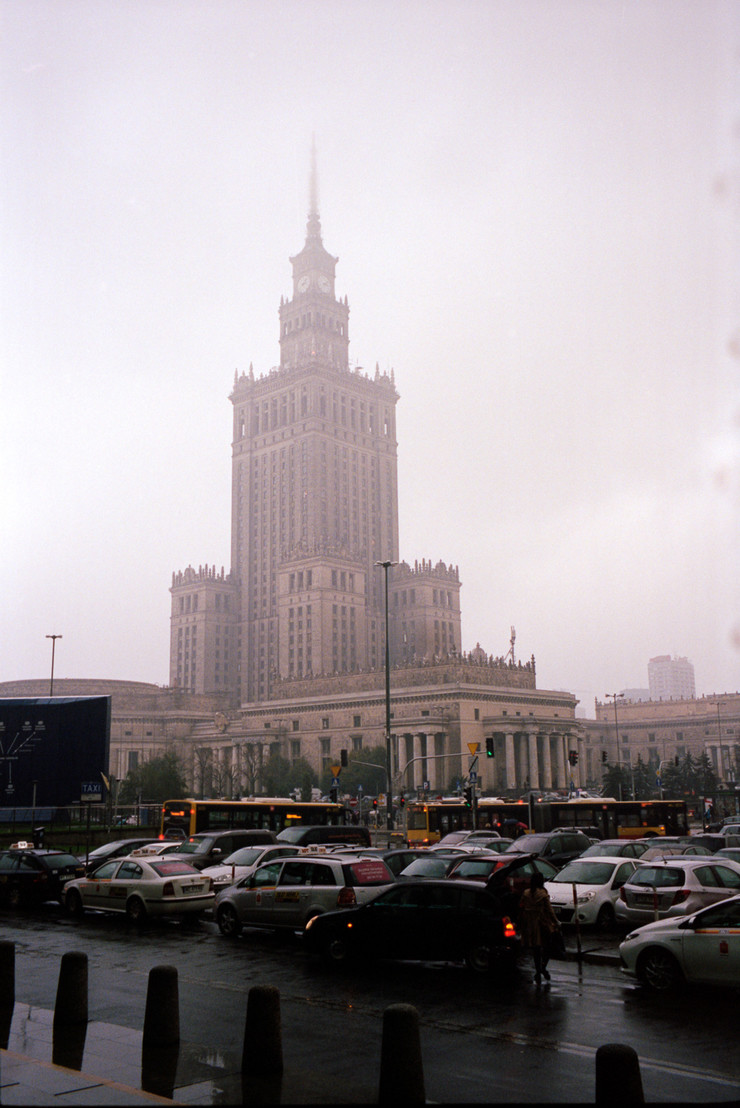 In conclusion, Warsaw is definitely a place I’d recommend to visit, although it’s not the place for party animals or thrill seekers. There’s a lot of parks to walk through, good museums, great vegan food, and it’s quite different from other cities I’ve visited like Tallinn or Prague.

From a photography standpoint, Warsaw’s old town doesn’t look as pretty as main squares in some other European cities, but this lack of beauty adds character. I really enjoyed shooting with the M6, but had problems with the meter with bright lights. An observation I’ve made after looking back at my photos is that I never got close enough to my subjects, and I often wasn’t parallel or my horizon lines weren’t straight, which is something I’ll need to work on as I get more used to using a rangefinder. The Fuji Superia 1600 shots were also noisy, which is not unusual for an expired film, but I’m not certain if it was the film or my scanner boosting the sensitivity while scanning. I definitely should have overexposed the photos with the Superia by a stop or so.

It also didn’t help that at both Stanstead and Modlin airports the attendants refused to hand check my film, so it went through the X-Ray machine twice. The security guards at the Museum of the History of the Polish Jews however were happy to let the camera not go through the X Ray machine.

I’ll finish with a selection of a few other photos that I wanted to show from the trip. 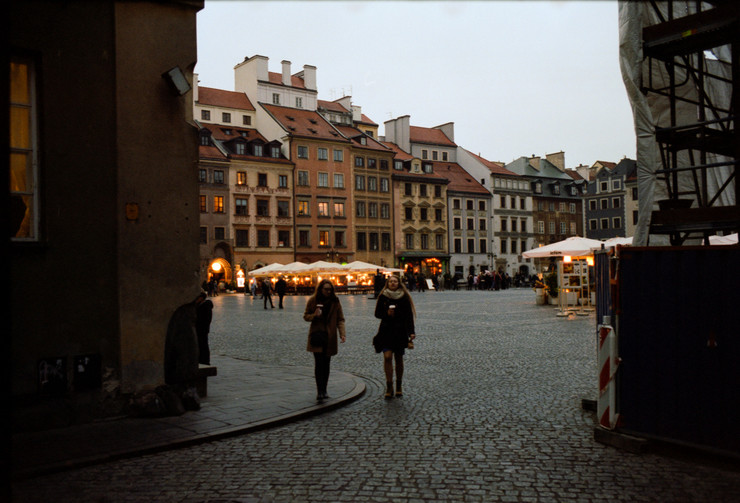 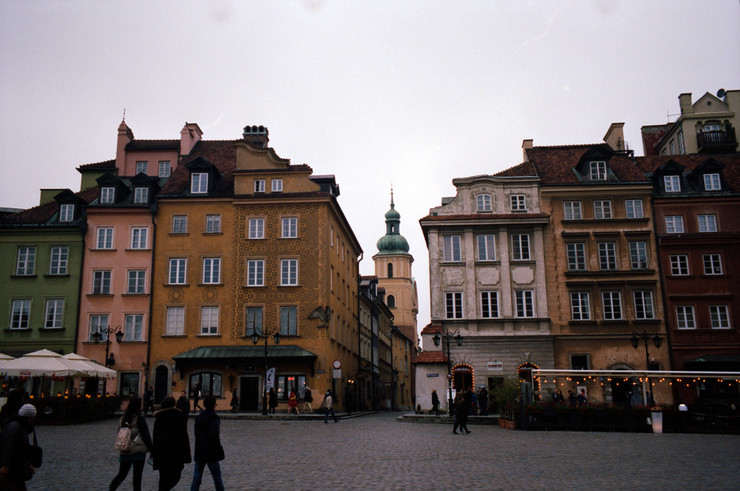 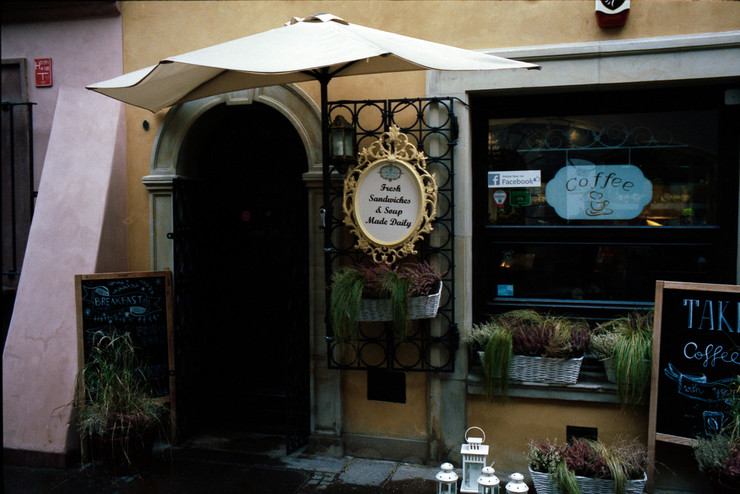 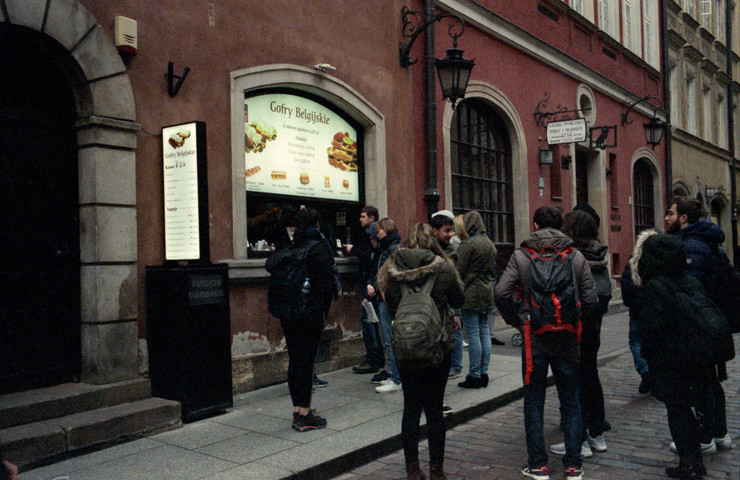 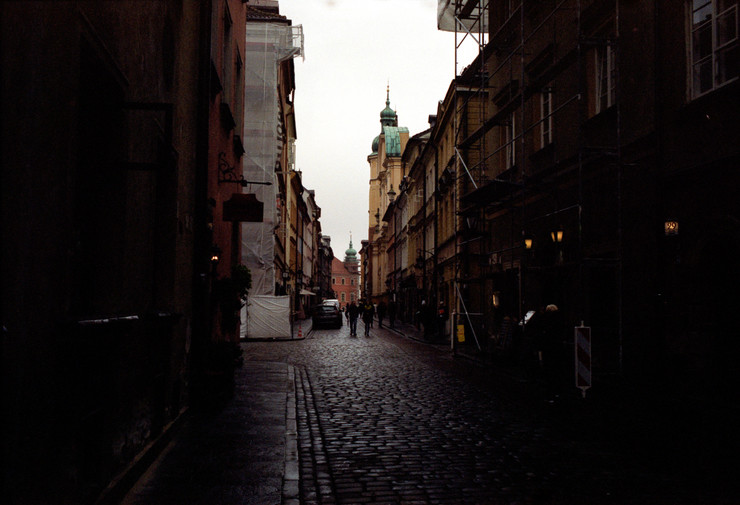 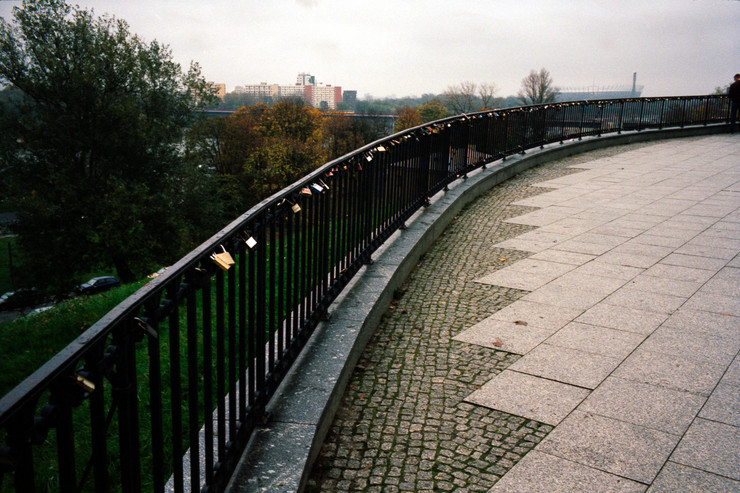 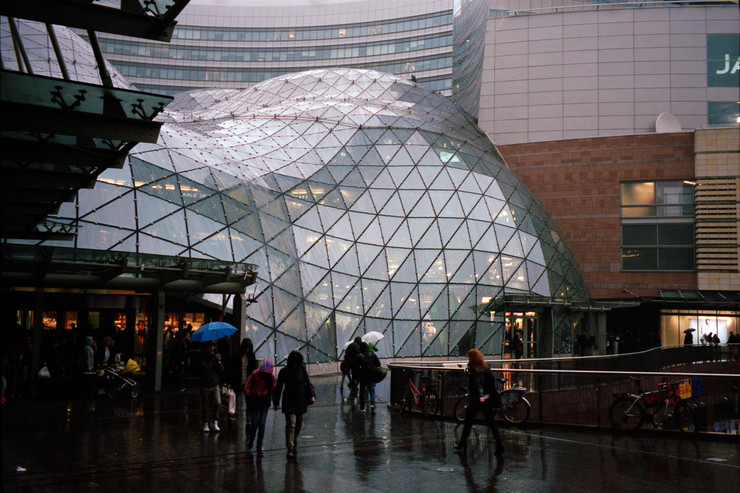 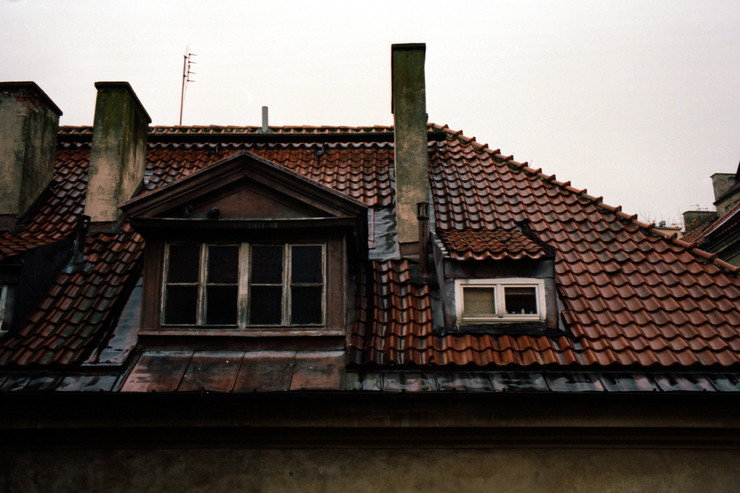 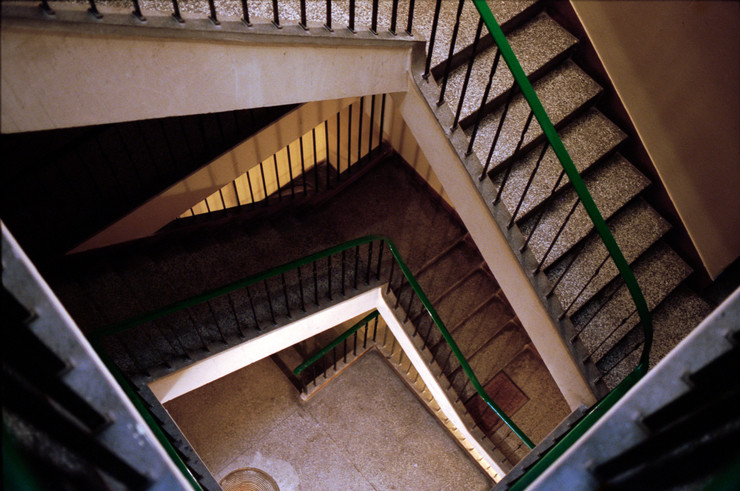