It's been a while since Part 1, but I’m back with a second interesting historic remnant in Rotherhithe - an old lock depth gauge. It’s situated not far from the Bascule bridge on Redriff Road I described previously, on the footpath that starts between the Moby Dick public house and the monument to James Walker and leads to the Russia Dock Woodlands. Above the footpath is a modern bridge that is host to Redriff Road. 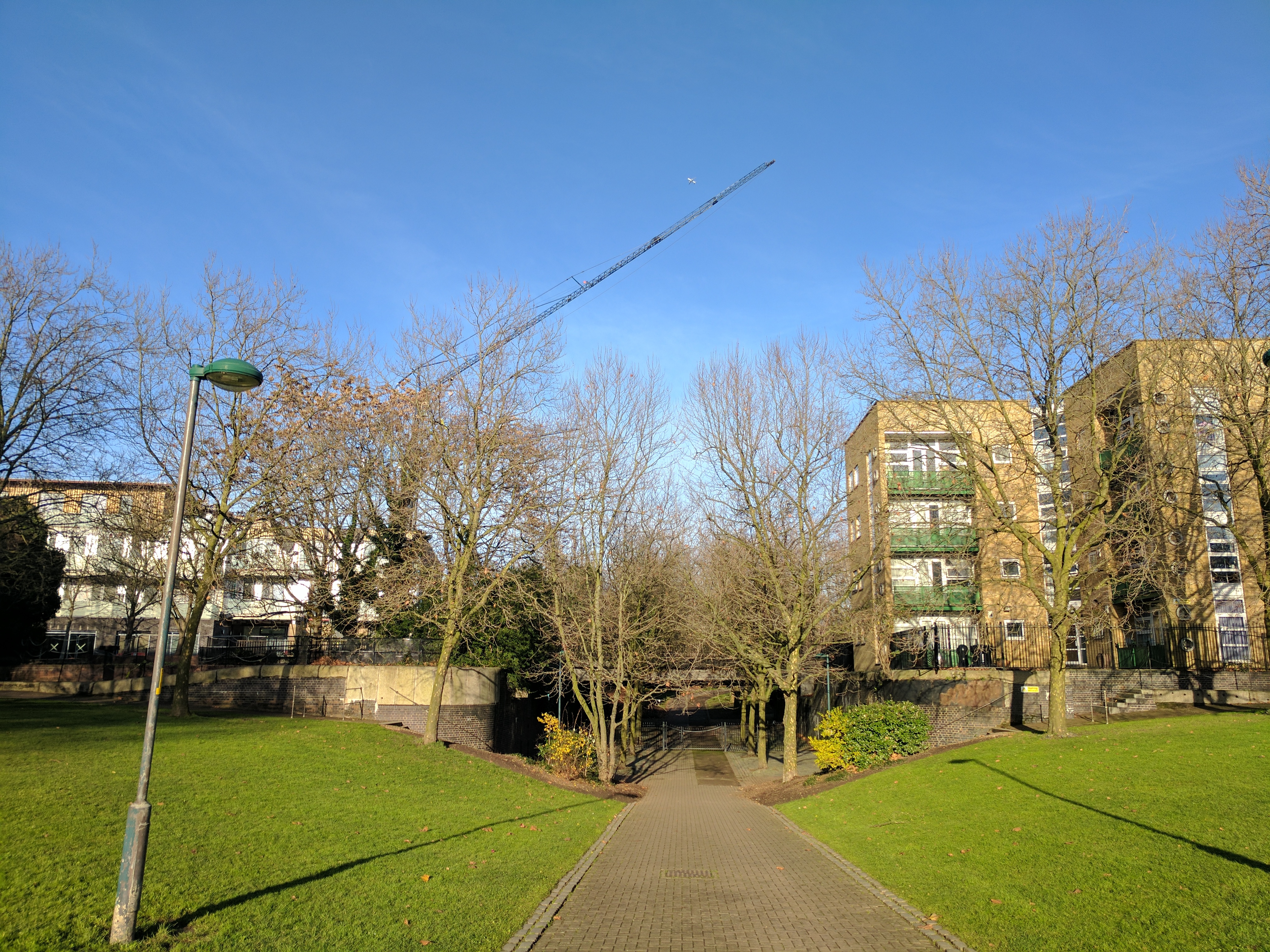 If you were walking in the direction shown in the picture, you’d notice the marker on the right hand side as you go under the bridge. It is a true remnant - it has no purpose whatsoever in the modern world. It is inscribed on original granite walls that are now used as supports for the bridge, but there is nothing to measure. What we now know as a leafy green footpath to Stave Hill was once Russia Docks, part of the Grand Surrey Canal. The path was made when the canal was filled in during the LDDC regeneration in the 1980s, but the bridge is older. You can see it on this 1915-920 Ordnance Survey map with the road already in place with a Customs House sitting next to it. 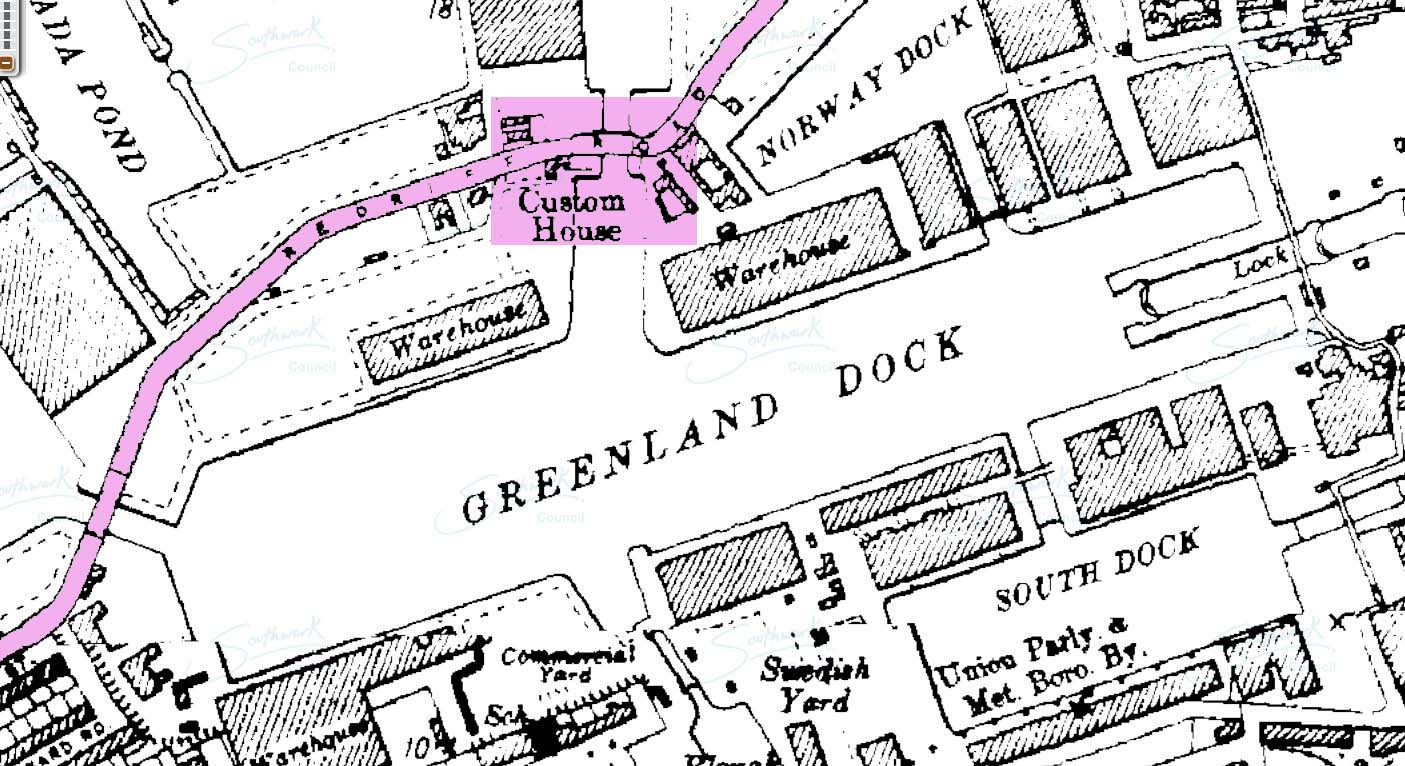 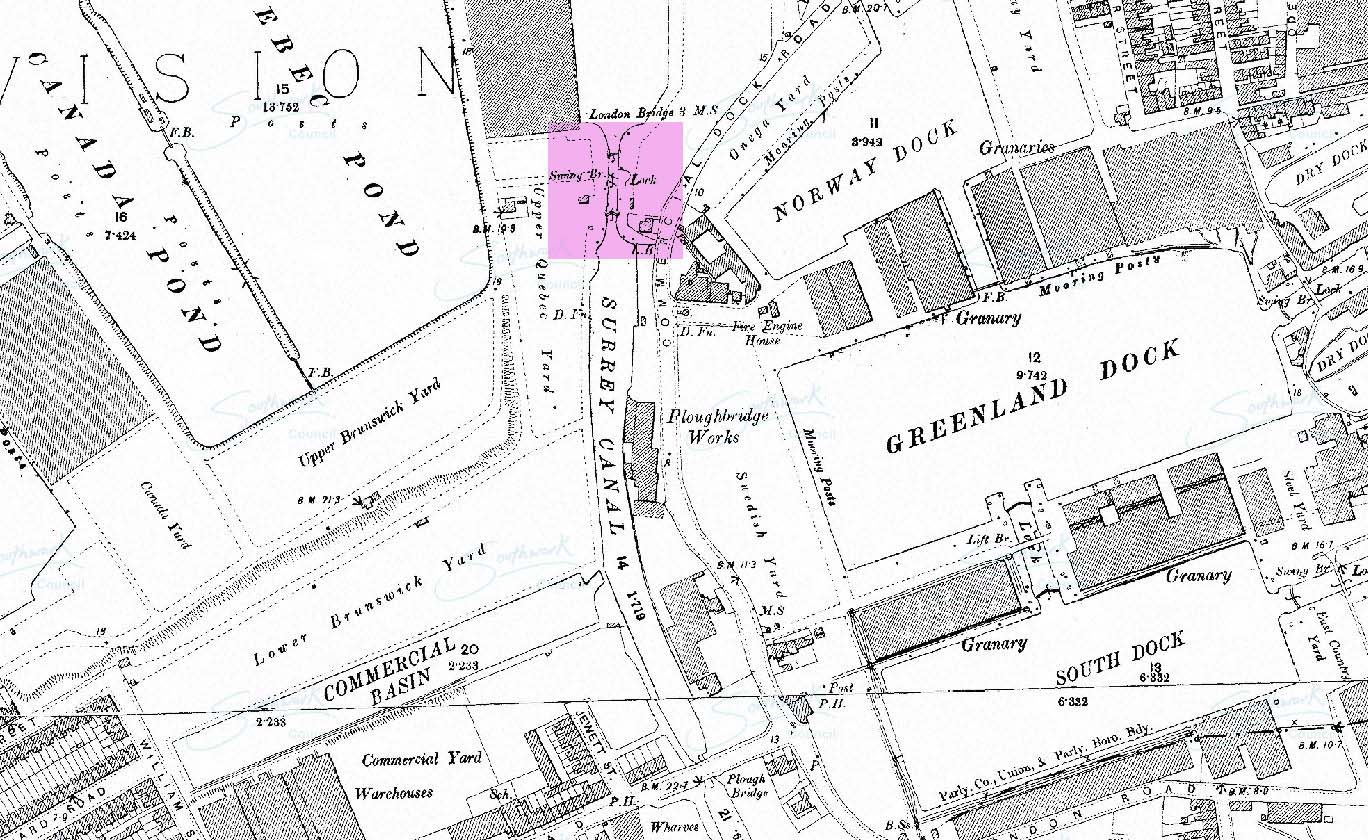 If we zoom in on the highlighted area, then we can see clearly marked two lock gates and a swing bridge. 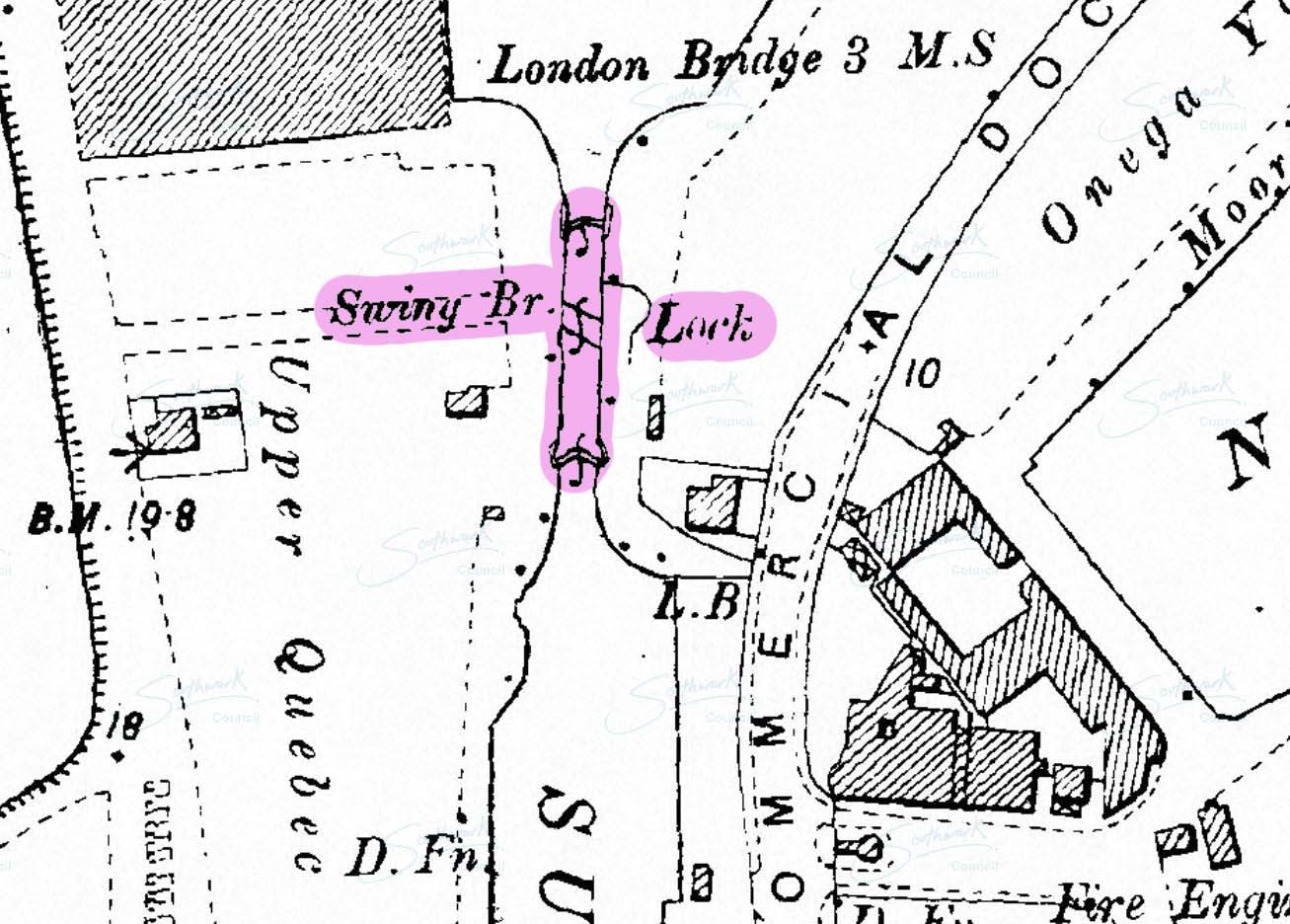 The swing bridge has been removed and replaced with the modern car bridge, the lock gates have been removed, the canal has been filled in, but the depth marker still exists (there’s also some evidence of the lock gates where their attachments are still visible). Here lies my Historic Remnant.

The following photo was taken in December, but I lost the negative and only found it when developing a batch of film this weekend. Hence I’m wearing a woolly hat in the picture of me. The picture is underexposed by a couple of stops and I had great difficulty scanning the negative - lots of bits of dust causing big problems. Since this series is partly about learning about local history and partly about practicing my photography skills, I’ve got a lot of takeaway points to learn from on this one. 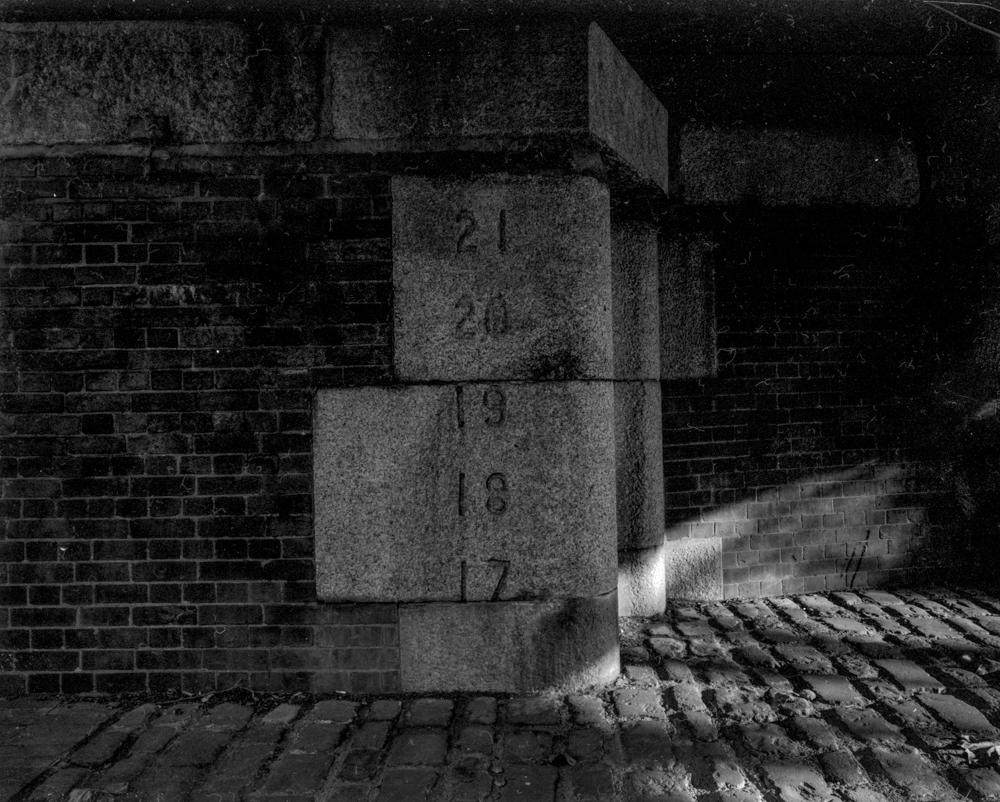 The marker measured the depth of the lock gate, and we can still see a range of 17 to 21 feet etched into the stone. 21 feet was definitely the maximum, but I’m surprised there isn’t a number below 17 - we should definitely be able to see it. This would either indicate that the range of the lock gate wasn’t very large (quite likely), or the stone has been replaced below. For reference, the twin gates at Greenland Dock onto the Thames have a modern gauge that was at 3m (almost 10ft) depth near high tide recently, which means the canals used to be much deeper than the modern docks.

To the sides of the bridge you can see evidence of the gates themselves, suggesting that this is all original brickwork. I've had a look around the area and don't see any other lock gates to compare them to, but potentially they could exist anywhere the Grand Surrey Canal entered another body of water. 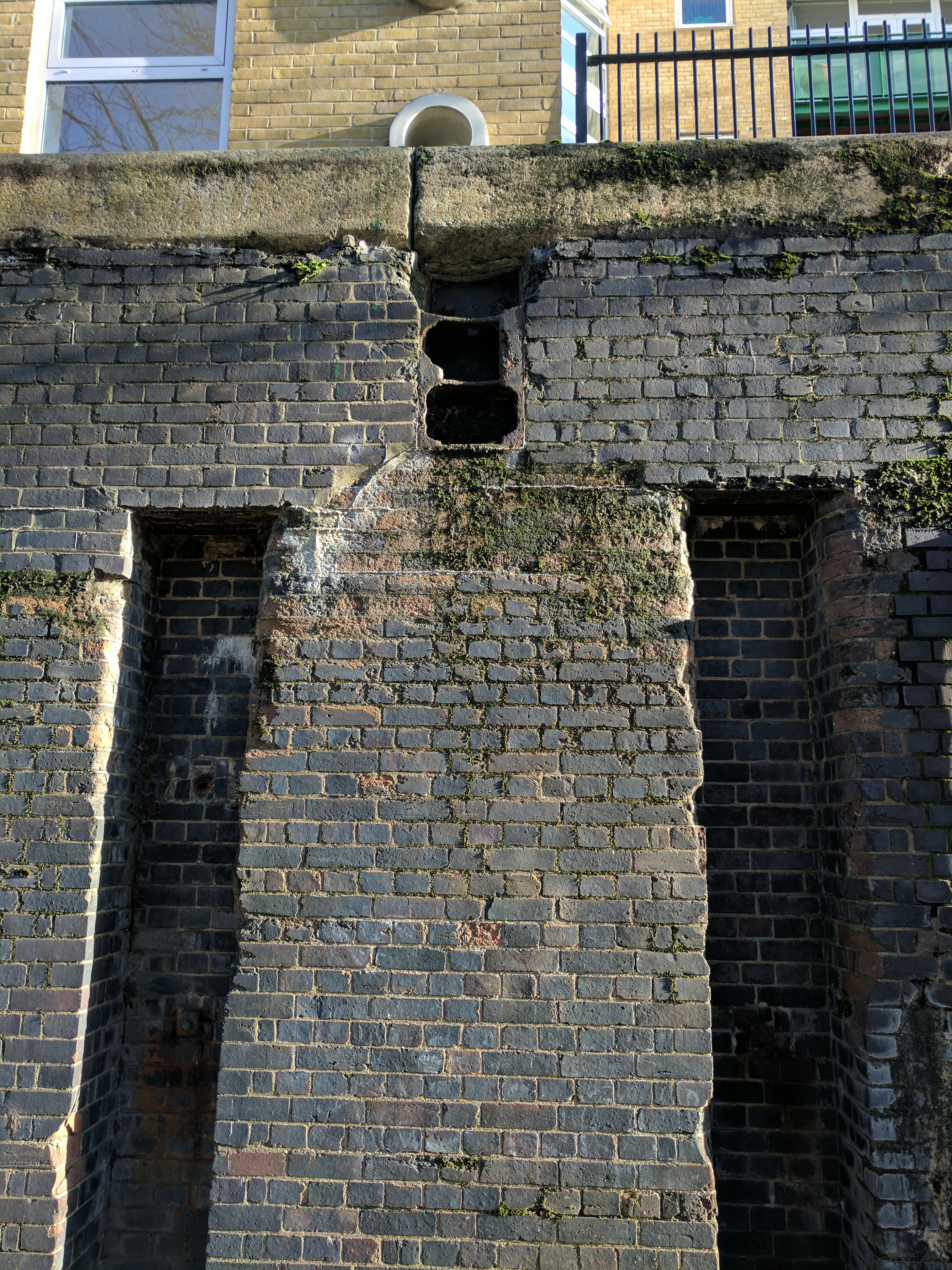 While I would like to think that these remnants still exist due to the bridge builders leaving a legacy, I expect it is purely a happy accident of pragmatism. The gauge probably survived the original bridge building some time between 1896 and 1915 because the walls were already strong enough to support the traffic. Later the LDDC filled in the canal, but it would have been a waste of effort and an unnecessary traffic disruption to rebuild the bridge if there was nothing wrong with it. The gauge is a survivor of two major building projects in its vicinity and seems completely unharmed. It's hidden in plain sight - it's likely that many local people will have walked past it many times and never noticed it.

Lastly, here’s a photo of me getting set up to take the photo. I've since bought a much lighter tripod which is far less cumbersome to carry on a bike. I hope that now it's lighter in the evenings I'll be able to get some shots after work.